Color Correction Gels On The Cheap


I'm Cheap. I admit it. However, if I need something NOW, there's no ceiling on what I'm willing to pay. But while I don't believe in cutting corners where it counts, I'm not above exchanging some tinker-time for a cash savings. Experimentation is a healthy pastime, as it forces one to really analyze the problem at hand if a successful resolution is to be achieved.

Take color correction gels. These innocent sheets of clear, colored plastic are so handy when it comes to helping your speedlight match the predominant ambient light source. Kudos to Nikon for including two handy gels with every SB-800 speedlight, and for refining the concept further with the SB-900 series snap-on plastic filters. Each SB-800 came with a Fluorescent (FL-G1) and an Incandescent (TN-A1) gel which would slip into the storage slot for the wide angle panel and then held in place by the panel itself. Replacements could be purchased only as a kit  which included several other colors.

Gels should be considered supply items, since they will wrinkle from repeated exposure to the momentary burst of heat that accompanies each flash. OEM replacements can get expensive after a while, and the wide angle panel retention setup removed the option for beam angle adjustment*. I got around this by using bits of gaffer tape to held the gel in place, but still kept the "tail" in the slot to properly align the gel. It was still a trick to properly fit the gel, tail and all, and I resorted to keeping an extra speedlight with the Color Temperature Orange (CTO) gel permanently attached to speed things up when time was tight. 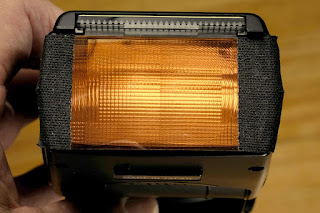 When the Fuji system became my camera of choice, I needed to get some of the gel magic on the EF-42, Fuji's own TTL speedlight. Rather than trying to replicate the alignment "tail", I simply cut some rectangular gels and taped them to the face of flash head. If I cut the gels to the right height, they would completely cover the panel and eliminate any white light from leaking past. And since I was going to tape the gels, I simply cut them a bit narrower so that the tape had some exposed surface to adhere to. 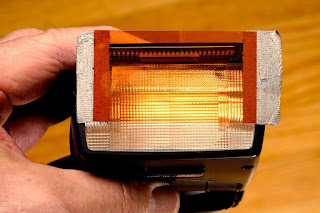 In this photo of the inverted gel (sticky side up) you can see how the tape holds the gel in proper alignment with the front panel. And while it is possible that the heat generated from repeated flash will crinkle the gel and melt the gaffer tape's adhesive, the convenience factor, plus the ease in manufacture, make the rectangular gel a practical alternative way to keep those gels in place.


Sizing The Gels: I went a little overboard on this. At first, I attempted to measure each flash's front plate to get the proper height. After several failed attempts, I decided it would be easier to make a series of templates from some card stock and test them on each flash. I started a 1 1/8" and made one for each 1/16" increment up to 1 1/2 inch, which was wide enough for the SB-900. This proved much easier to do, since  the face plates aren't always perfectly flat. Using the templates, I came up with the following suggested dimensions: 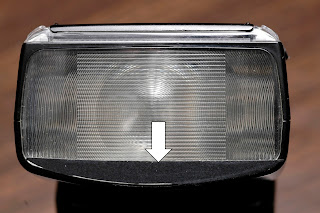 The SB-25, SB-26: These two are the only SB Speedlights that I own that  have a rounded contour on the lower part of the flash head. Since rectangular gels are easier to cut, a narrow strip of electrician's tape was used to flatten out the offending curve. In this photo, you can see the tape, applied by hand to an SB-26 and trimmed with a craft knife, resulting in an almost rectangular window. The arrow points to the new, lower edge of the window.


Trimming The Gels: The fastest and easiest way to cut your gels is to use some sort of slicer. I use a less-expensive version of this Fiskars paper trimmer. Unlike the traditional paper cutter, it uses a fixed blade traveling on a clear plastic track, eliminating any torquing during the cut. Ruled guides help you align your gels for correctly sized cuts.

Gels In Sheets: You can purchase the gels in sheets. Click on the links to purchase. 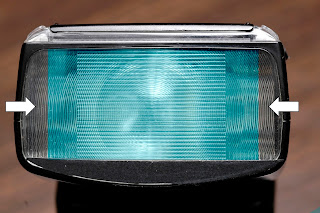 The Right Rectangle: You may notice that the measurements don't cover the entire face of the flash. There's a reason. In this composited image, I placed an imaginary "blue gel" over the rectangular region within the panel. By placing the gaffer tape directly on the surface of the panel (see arrows), I can ignore the irregular contours on the sides. If you look back at the sample images of the SB-80 with the CTO gel taped in place, you can see how this all fits together.


Right now I'm in Hog Heaver, or Gel Heaven, since these little bits of colored plastic can be generated by the dozens from sheets. It economical too, when compared with the cost of a pack of the OEM stuff.

*When the Wide Angle Panel is used, the beam angle automatically opens out to 17mm, the widest setting.

Update May 22, 2017: Gel Meltdown: Although it has never happened to me, here's a not too subtle reminder about some complications that accompany attaching a gel directly to the surface of your flash head.
Posted by Tom Jung Photography at 12:10 PM