My Year Of Living Dangerously: 2015 presented some shifts in my photography. I've started playing with light a little more, and have gained some new respect for mirrorless camera, as nearly all of my winter assignments were done with them. 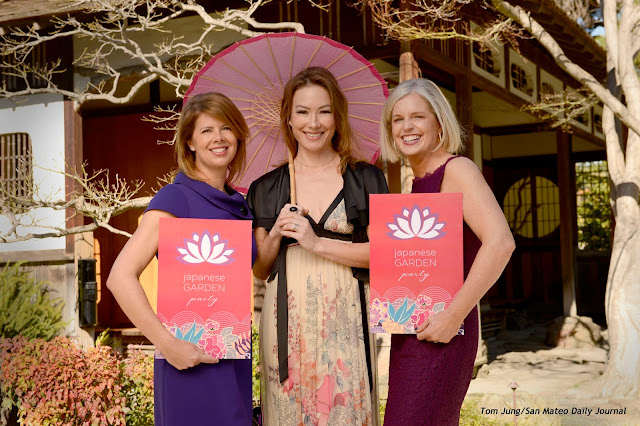 February 24: PARCA Fashion Show.The pre-event photo was taken without flash, a first for me (just kidding). A giant 7-foot translucent umbrella was positioned between the sun and the subjects, resulting in impossibly smooth lighting. While sunlight falls on both the foreground and the background, the shoot-through umbrella removes 2 full stops from my subjects, resulting in the overexposure of the background. I like the fact that the parasol, added at the last minute, cleaned up the tree branches that would otherwise surround the head of my left-most lady. 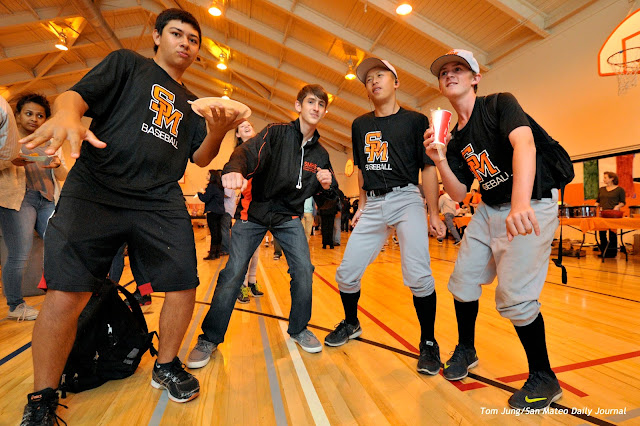 March 24, 2015: San Mateo High School's International Food Night. I keep a mental copy of this photo for a number of reasons. First, it was one of the first images to truly convince me that wall bounce flash was a very viable technique, and combined with ambient light, capable of some very detailed images. Second, it was the closest thing I've done to an "Uptown Funk" themed photo.And last, it  represented a blown chance at a much better photo. 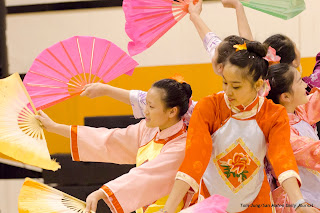 Had I thought to buy $20.00 worth of event "script", I could have had each buy something they might enjoy eating and shoot until my Nikon smoked. Unfortunately, I didn't, and had to settle for some members of a dance troupe who provided entertainment. Just think: The gymnasium, four San Mateo High School athletes shown eating and having fun. Hey, $20.00 for charity and unlimited access to four willing subjects. Couldn't get much better. 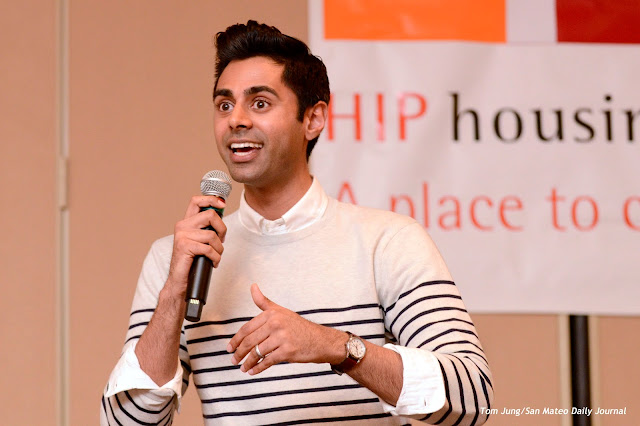 May 8: Hasan Minhaj at the HIP Fundraiser. Hasan, a native of Davis, California, was the featured guest at an HIP fundraiser. The newest correspondent on the Emmy and Peabody award-winning program ‘The Daily Show with Jon Stewart’, his speech quickly became a comedy routine which, in no time at all, had the audience howling. I spoke with him in the "green room" and had a chance to discuss his role as the "generic Middle Easterner", which is ironic considering his background. He was also one of the most gracious people I've photographed, as he introduced me to both his wife and his parents who joined him for the event. Ceiling bounce was used with the Black Foamie Thing. 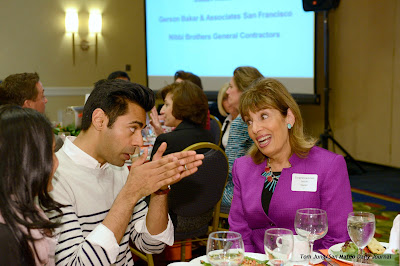 I did some candid photos of Mr. Minhaj with Congresswoman Jackie Speier for possible publication. It was one of the few times I felt more like a voyeur than a photographer, as I was watching a politician enjoying herself, something we don't often see. The shot was made with a domed SB-800 with a CTO gel. White balance in the camera was set to Tungsten, which is why the PowerPoint slide in the background is so blue.

I finally submitted an unremarkable image of Mr. Minhaj speaking with members of the HIP board, a much more appropriate image for the Community section of the paper. 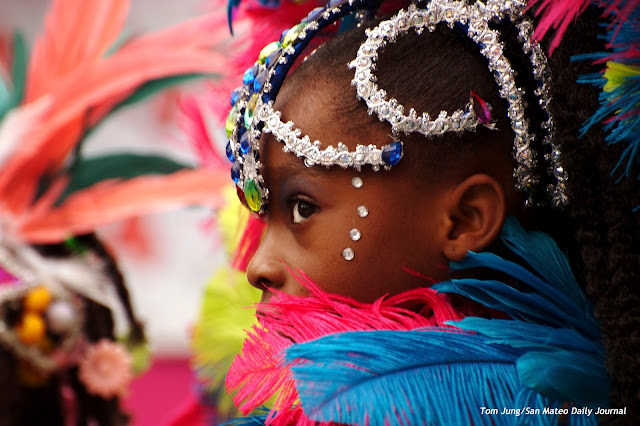 May 24: Carnaval in San Fransisco. My favorite practice range for photographing people. I once kidded my friends by saying I went for the "scantily clad women", but it's really about the wide variety of photogenic faces that can be found. And its hard not to get caught up in the dance rhythms of the dances from throughout Central and South America. 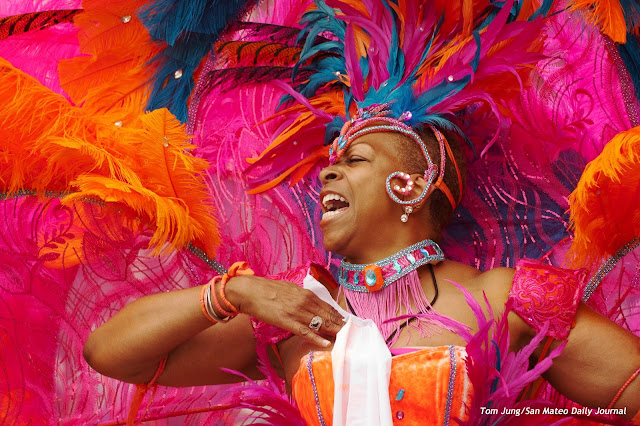 I was a little surprised at the results. Normally, the event is a duel between my speedlights and the sun, with every shot an attempt at achieving both saturation and shadow detail. The skies were overcast this year, and these two shots were made using the existing light without any supplementary flash. These shots don't look like the sort I normally bring back from the event, but I was pleased. 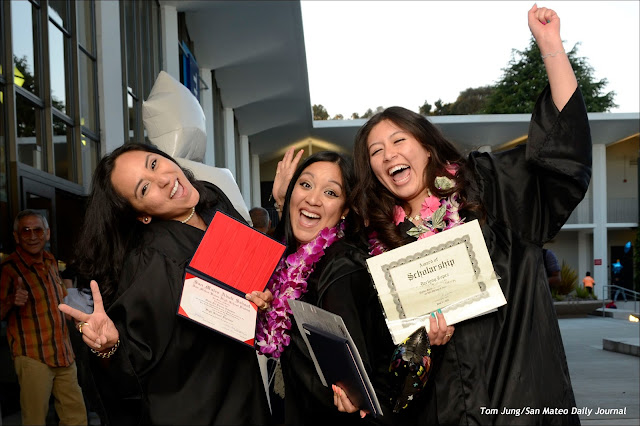 June 17: Graduation Night, San Mateo Adult School. I had an "Ah HAH" moment with this shot. Even with an assistant, it can be difficult to move amid a crowd, trying to get a candid shot that embodies the spirit of the event. It occurred to me that if I could bounce a flash under a balcony, I could achieve a large, contained light source. Once I was set up, I could have my subjects come to me, a sort of photo booth on the cheap. This was done with a single, camera mounted bounced speedlight. I was really lucky to not clip the fingers of the subject on the right. 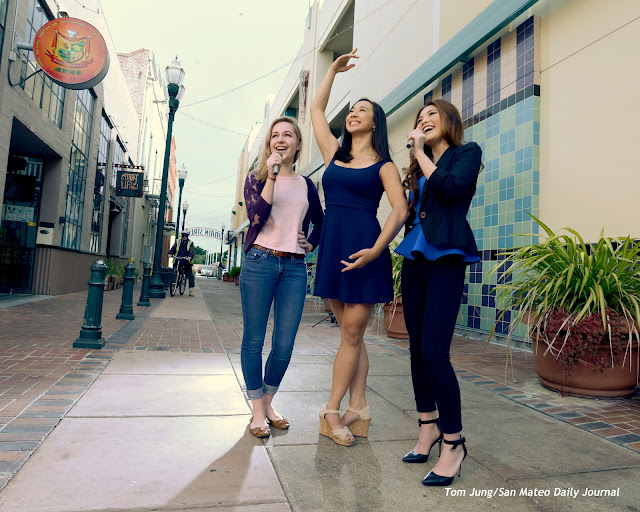 May 28: Finalist In The Beach Blanket Babylon Scholarship Competition.There were three finalists for the Steve Silver Foundation and Beach Blanket Babylon “Scholarship for the Arts" from our service area. I was trying to get a urban feel, and found this convenient promenade in downtown San Mateo. The big new thing was a Norman flash with a spot light reflector throwing a hot accent light towards my subjects. The alignment was bit off, something I'm ashamed to admit I didn't see, as it would have been easy to correct. It was my intent to get a dark blue twilight sky (It was 10:00am, but the way) by using an incandescent white balance and gelled Norman flashes, but I didn't have the power I needed to make it happen. Interestingly, had I used a D70 with its high flash sync speed, I could have made it happen. If I were to do it again, I'd use a Fuji X-100, just to have access to those high sync speeds. I should have thought to bring it. 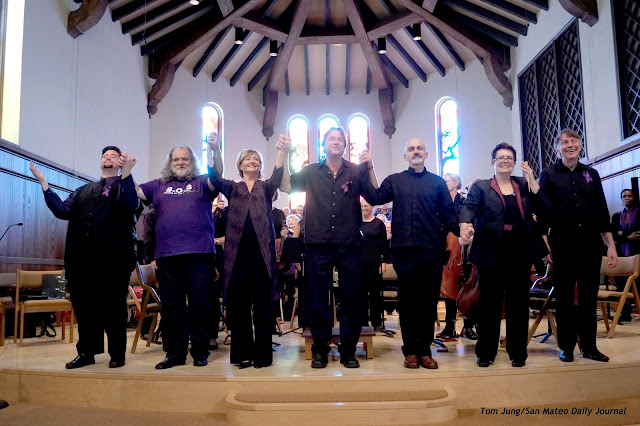 August 30: Street Requium. Opera star Frederica von Stade (third from left) was the guest mezzo-soprano during a charity performance of the work. While not a opera buff, I do remember Ms. von Stade performing with William Shatner during a Boston Pops performance on PBS. She sang a beautiful a cappella rendition of the Star Trek theme as Mr. Shatner recited the "Space, the final frontier..." mantra. When I shared this with Ms. von Stade, she lit up and said, "Just think. I was on the same stage as William Shatner". Her comment was the most refreshing, and humbling response I've heard from so famous a subject.

This was one of my first assignments using a Fuji mirrorless camera. In truth, it's a mess of a photo, since the light from the back windows induced the contrast-reducing flare about the heads of the performers. 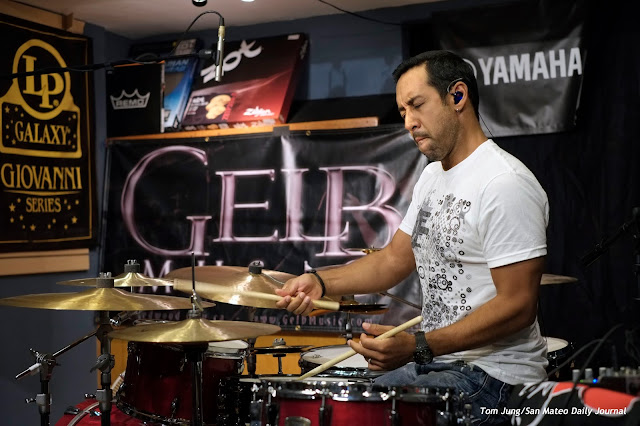 September 25: Antonio Sanchez at Gelb Music in Redwood City. Award winning drummer Antinio Sanchez performed during a drum clinic in a  Redwood City music store. I tried something different this time. I used a D7000 and a 70-200 mm lens for my long shots, and two Fujis with 18mm and a 35mm lenses for the closer ones. I was surprised at how much I liked to color rendition I got from just setting the white balance to tungsten. There was some very minor color correction (Hey, I had a white tee-shirt to work with), but this is pretty much a straight shot. It was also the only shot where you can clearly see his face because most of the members of the audience were seated camera left. 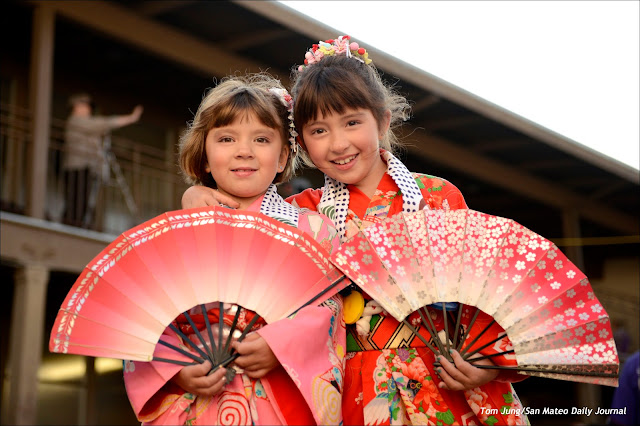 August 8: Oban Festival in San Mateo.   This shot reminded me that just because you have a flash, you don't always have to use it. There is a white, two-story building behind me, which made a convenient reflector for the afternoon sun.It's easy to forget that great natural light is often available, if you look around once in a while. 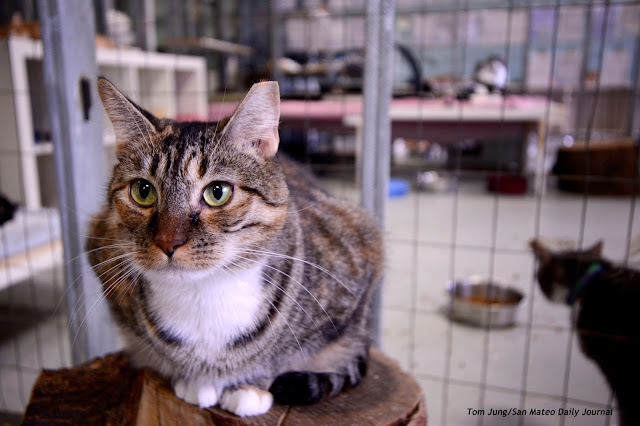 October 14: Nine Lives No-Kill Shelter. I had taken a number of photos for 9 Lives, so I wrangled an invitation to visit the shelters. Described by my editor as a warehouse full of cats, I was curious to see what it was all about. There were a number of large enclosures like the one you see, each being about 12' by 10' and housing about eight to ten cats. I was really surprised at how friendly they were (one actually jumped on my shoulders as I knelt to make a close-up), almost enough to consider owning one. This shot is my benchmark photo for my 15-30mm Sigma wide angle, a flare-prone lens that's sharp enough to discourage my doing something stupid like buying a 14-24mm Nikkor, at least for now. 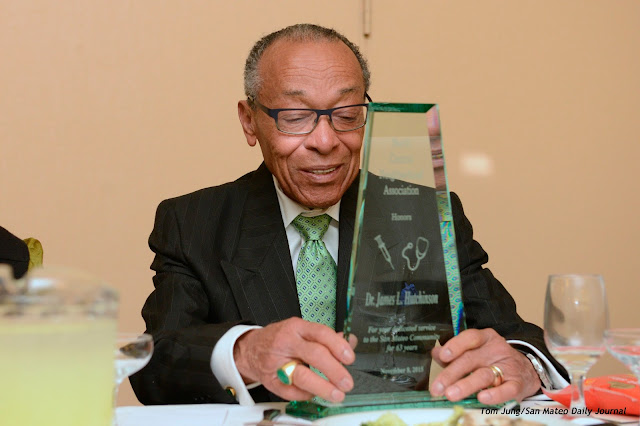 November 8: Dr. James Hutchinson. Dr. Hutchinson was San Mateo's first African American Doctor and was honored during a luncheon at the Elk's Club. At 92, he still maintains his practice, and is known to dispense medical advice to anyone who can keep up with him during his daily walks. I like the photo, but did not submit it because I felt that he looked too absorbed with his award. Instead, I submitted a photo of him shaking hands with a former receptionist and long-time friend Millie Swan, something of a local celebrity herself. 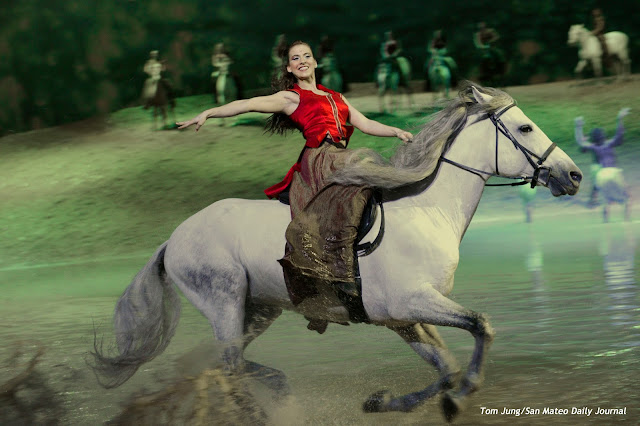 November 18: Odysseo. The newest reboot of Cavalia, Odysseo is a breathtaking combination of horsemanship (sorry for the masculine usage) and splendid acrobatics both on horseback and off. The show defies description, and is something that every animal lover should try to see. 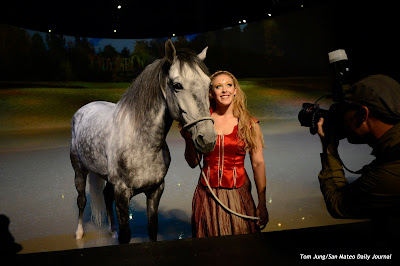 I learned something incredibly useful by listening to the photographer you see at the right edge of the photo. You see, the elevated spotlights were casting deep shadows in these performer's eyes, and I gave up trying to get a shot. Yes, our flashes would have solved the problem, but for safety's sake, were were instructed to not use them. The photographer had his flash turned off, but had the foresight to tell his human subject to look up towards the light. If you examine the image closely, you see that his gambit worked, but I have no idea how effective his image actually was. Just the same, a brilliant move. 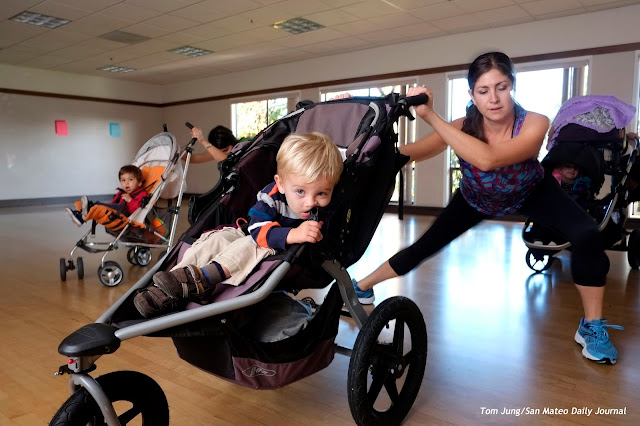 December 11: Stroller-Obics. Not high church from a photography sense, but a reminder of how much a single speedlight can change a photo. Bounced from a wall to my left, the light had sufficient wrap to soften the shadows and provide enough fill to keep the shadows from going totally black. Interesting, I'll remember this photo because I inadvertently shot it at ISO 200, a ridiculously low setting for shooting indoors. But the flash was powerful enough to do the job, if just barely. Even with the supplementary battery pack the flash struggled to keep up with the action when set to full power. 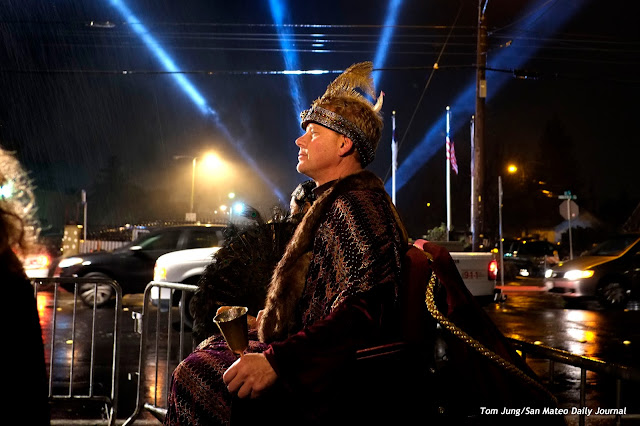 December 21: Bethlehem A.D. 2015. This was my third time in attendance, and this was my favorite photo, even though it wasn't submitted. I had used a tungsten-gelled Lightsphere protected by a plastic bag and held aloft by Cissie, my assistant. For this shot, I had her move to camera right so that the light would be aligned with King Harod's nose. It gave me a shot that could have cause exposure problems for any form of exposure automation. Instead, I had Cissie stand at a predetermined distance from the subject and to move closer or farther if I saw the exposure needed adjustment. 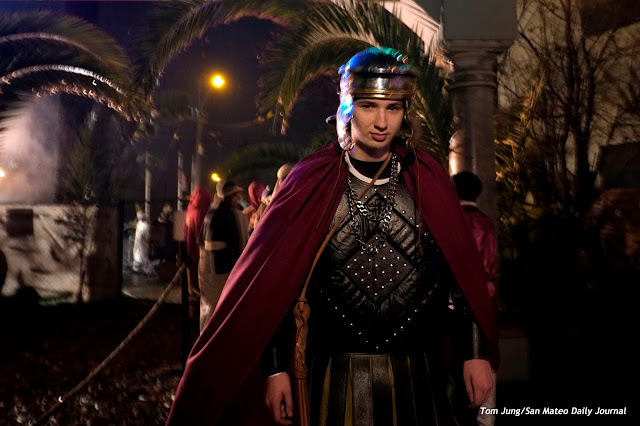 The same technique was used for this shot, although you can tell from the shadows that the light was also aligned with my subject's nose. Same technique, taken with the flash at a similar distance.

It seemed like a learned quite a bit in 2015. I'm particularly pleased with the performance of my Fuji cameras, and really appreciate their light weight and easy handling, so long as I keep their limitations in mind. We'll see how things fare in 2016.