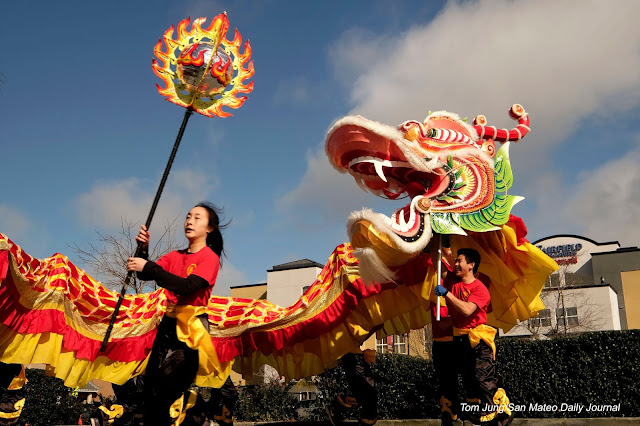 Gung Hay Fat Choy! The city of Millbrae welcomed the Lunar New Year with a parade and a festival. Since large sections of Broadway Street would be blocked off, there would be plenty of room for a traditional Dragon Dance, since the silken serpent requires a lot of room to move about. The dragon was managed by a group of students from Millbrae High School.

Why This Shot?  The Dragon is traditionally led by a dancer waving a globe mounted on a stick, which is called the Pearl. It's a metaphor for wisdom, and the Dragon is portrayed as the embodiment of the quest for enlightenment.  I thought the image provided a chance to emphasize the meaning behind the dance, and I liked the composition and exposure well enough to submit the image.

Dragons And I Have A History: I enjoy being around the Dragon. As a boy of eight, I had a very intimate relationship with the reptile, mainly because of my father's association with Boy Scout Troop 3, the first scout troop organized by Chinese Americans, and possibly the oldest Scout troop in San Francisco. On Chinese New Year, it fell to Troop 3 to provide the (young) man power to bring the dragon to life during the annual New Year Parade. Days before the actual parade, the Dragon was removed from its crate and assembled in the YWCA building located on Clay Street. It was my sister's and my job to screw in the light bulbs that illuminated the dragon from the inside, while adults on step ladders installed the bulbs attached to the spines on the outside. And on the Sunday after the parade, we returned to remove the bulbs before the Dragon was re-boxed and stored until its next performance. 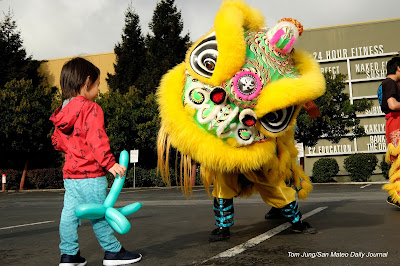 In years past, I often submitted images where children were shown interacting with a Lion, which were common in Lunar New Year celebrations. The reasons were simple. Lyons are smaller and therefore more affordable for traditional dance groups. They require only two dancers. And their performance venues don't have to be huge.

I made this photo while the troupe was warming up. It's clean, properly exposed, but so similar to my past efforts that I held it in reserve in case nothing better came up. While I used a flash to"sparkle" the image. it wasn't really necessary, as the light overcast gave some very soft-edged shadows and a bit of fill. 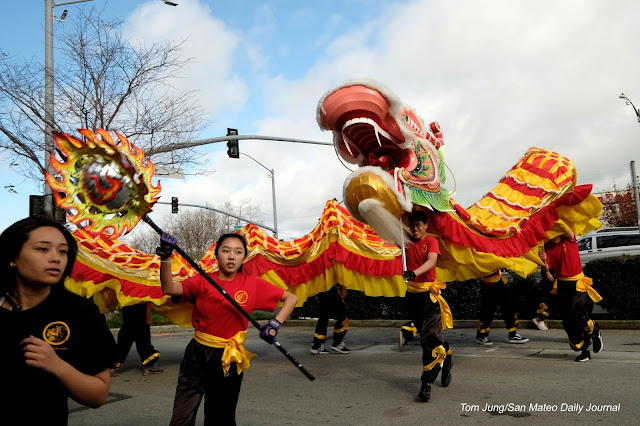 Open Season: There were many, many opportunities to make a decent photo of the Dragon. I would photograph a sequence using the 8 frame per second continuous exposure mode. When the dragon turned away from me, I would sprint farther down the parade route and wait for the photo op to come to me. None of the three following samples were submitted for publication. 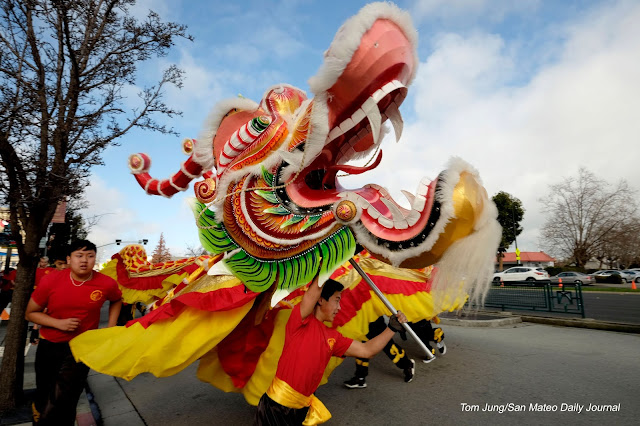 It no small job for the lead dancer to march down the street hoisting a dragon's head above his (or her) own in time with the drum's beat.  Unfortunately, the image had too much empty space on the right side and for that reason was not submitted. Yes, it could have been cropped, but I like to stay with the 1.5 aspect ratio in case the editor needs some extra image space on sides. 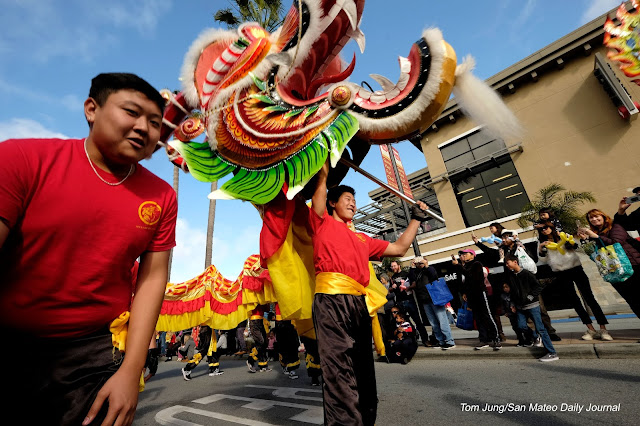 This is one time when a 10mm lens just wasn't wide enough to take in everything. However, the young man  at the left edge of the frame might have made an interesting visual element were it not for his expression. Maybe I could have lowered my camera position, but I guess I'll never know. 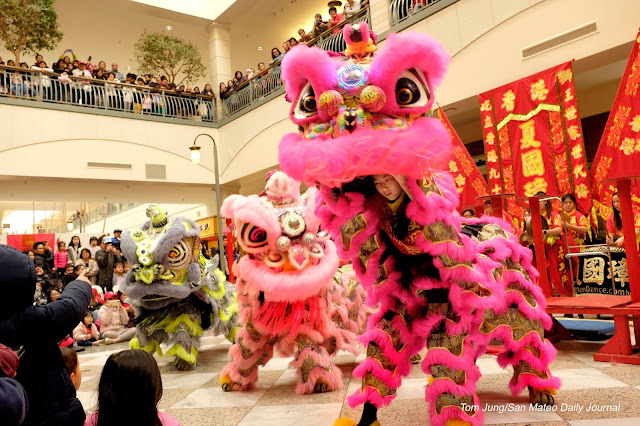 The Verdict? For a some reason, my editor chose to run a photo I had made the week before which I had assumed was rejected. The indoor photo was a little flat, but I wrote in my caption that the dancer "took a peek" at the audience, which probably added a humorous spin. It ran on the front page, so no complaints there.

Addendum - January 28, 2020: The photo at the top of this post ran in today's edition of the Journal.
Posted by Tom Jung Photography at 12:10 PM No comments: Links to this post