I'm grateful that photographing for the Community Page isn't the same as being an Event Photographer. My current obligation is limited to submitting a single photograph that:
This grab-shot met the three criteria with the the "trophy" clearly visible, surrounded by hands in the act of making the presentation (Photo #1). The three subjects are, from left to right, the honoree, the presenter, and the President of the organization, so all the necessary groups are represented. You can infer from the photo's odd composition that it was a shot "grabbed" while the audience was giving a standing ovation.Given that it was made in just a few seconds with no coaching of the subjects, I'm much pleased.

Tactics: The shot was made in a period of less than a minute, starting the moment my subject stepped to the podium and ending when she began her acceptance speech. I actually walked across the hardwood dance area and stood up, something I only do when it won't distract the audience too much, and when a few "in your face" flash would have been a tolerable, and temporary, inconvenience. I could have given them instructions to improve the photo, but my voice would not have been heard over the applause. The shot was a gift, and I accepted it. I'll manage the photo a little more next time.
White Balance Adjustments: In another post, I made some indoor event photos with the flash and camera set to their native Daylight white balance settings. I found that the backgrounds were a bit warm (no big surprise), but found that my subjects, lit by by both the flash and some (incandescent) ambient, suffered from this odd combination of warm and cold tones. 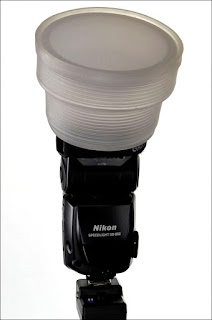 For this event, I used a cut CTO filter taped over the flash tube of a shoe-mounted SB-800 with a supplementary SD-8a battery pack for quicker recycling. I'm using the most current Gary Fong Collapsible Light Sphere and have found the improved speed mounting system to be the most secure to date. I do not use the Gary Fong Gel Filter Sets because the orange gel, supposedly the equivalent of a full CTO, doesn't accurately match the Incandescent preset of my Nikons, and I have no use for the other colors.

In Photo #2, you can see that the underexposed chandelier in the ceiling is rendered as white, a good sign that the ambient light was close the the Incandescent preset. As you can guess from these first two photos, this room is really dark from a photographer's perspective.

It's appropriate to remind you shooters that making multiple flash images can become something of a bother to the subject. After all, some portion of the on-camera flash is aimed directly into the subject's eyes, light modifier notwithstanding. If you're trying to capture that perfect expression, a ceiling bounce is much less distracting for your subject, although care must be taken to avoid blinding anybody unlucky enough to be standing next to, or behind you.

Big Group: Once again, the Cloud Dome gave a surprisingly good photo without any of the drama. The exposure time (shutter speed) was increased slightly to bring out the details in the background. The paintings are still underexposed slightly, but the highlighted areas created by the accent lights provide some visual variety. If memory serves, the walls in the hallway are not white at all, but actually a pale lime green, and are actually rendered correctly. The wide screen monitor at camera right is rendered blue because it's probably a daylight-equivalent light source, and the difference in Kelvin temperature (3200 degrees vs. 5500 degrees) accounts for the cooling effect.

The Takeaway: Consider this when using the Cloud Dome:
Keep a Cloud Dome nearby when working indoors. It can be a lifesaver.
Posted by Tom Jung Photography at 12:10 PM No comments: Links to this post