Halloween At The Carolands

Boo! A Hillsborough Halloween party, complete with a "haunted" mansion, was the final stop for many neighborhood trick-or-treaters. There were zombies, chain saw murderers, and a variety of ghastly tableaus. But the highlight of the evening was the light show created by Alegra Entertainment and Events. A variety of ghostly images were projected onto the walls of the mansion, and they just got scarier as the evening grew darker. Since I had to submit the photo before 8:00 pm, I had to make my photo as quickly as I could.


Knowing that I might have to leave before it got dark, I made a quick group shot of some of the event's hosts in full costume. I wanted to make the shot before the youngsters started to arrive. Unfortunately, the evening sky was still quite quite bright, and  with my camera's minimum flash sync speed of 1/180, my flashes didn't have enough power to allow my using a smaller aperture.  Sure, I could have darkened the sky by stopping down to F 8.0, but there wasn't enough flash output to make it work. This was certainly a usable photo, but without a context to anchor the image. If I could have waited another hour, the photo might have worked. but as more guests started to arrive, postponement was not an option. 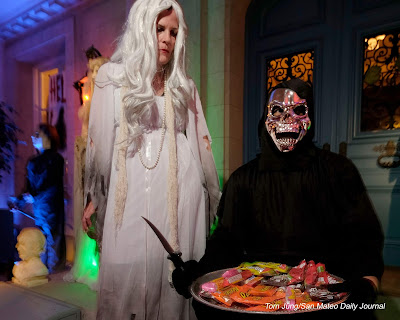 I shifted my attention to the covered carriage entrance, a feature  typical of mansions built in the early 1900s. Without the twilight sky as a background, I was free to boost the ISO values, which in turn effectively increased the effective power of my flashes. Because the ceiling was too tall for bouncing, I relied on a domed flash held aloft with a short monopod to provide some modeling of my subjects. I could also increase my exposure time to allow the ambient accents lights to "show their colors". Of course, those long exposure time resulted in some camera movement blur, but the portions of the image lit solely by the flash were much sharper. I doubt that anybody except another photographer would have noticed the blur.
The Bewitching Hour: Just as I was leaving, the projections were easily seen on of front of the mansion. I made this quick sketch photo to establish my ambient exposure. At this point, I considered the background properly exposed, and could now concentrate on making minor flash adjustments. That bright area in the foreground is the puddle of light created by my flash, which was aimed where I planned to place my subject. 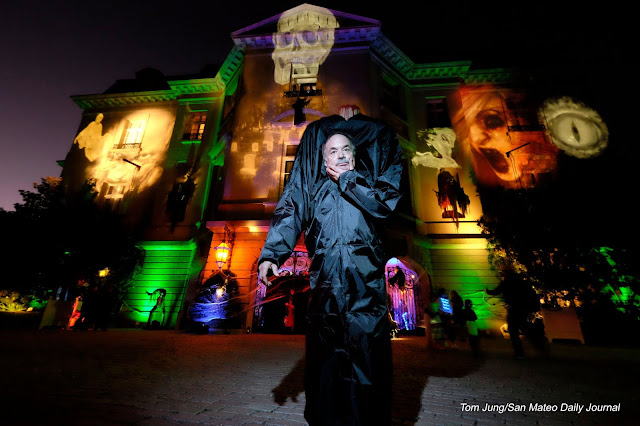 The Shot: After refining my framing of the mansion I called my subject over and verbally directed him to a position near the center of the frame. From this shooting angle, it would have been difficult to include his feet unless he moved farther from the camera, something I wanted to avoid.  A tripod for the camera and a lightstand for the flash would have allowed me to refine the pose still further, but since I had neither, close enough was good enough, and I had my photo in six exposures.

The photo at the top of the post is a variation on the image I actually submitted. I simply burned in the highlight created by the flash to draw the viewer's attention to my subject's face.

Addendum: I found this sample image well after the posting was written, and it adds an additional level of exposure control. 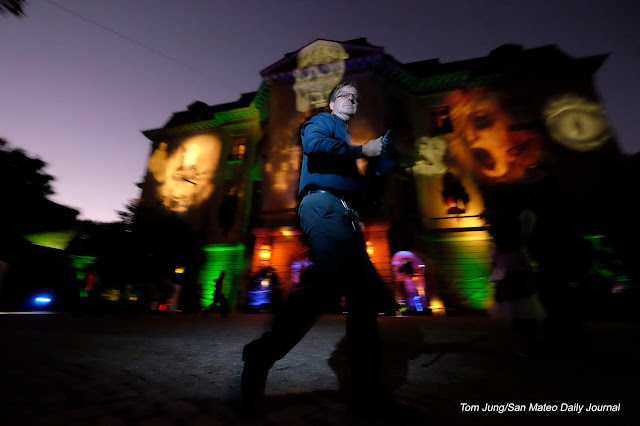 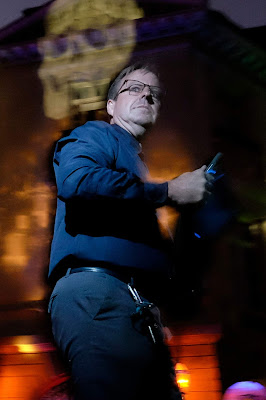 Rear Curtain Flash Synchronization: The technique is called Dragging Shutter, which is when you use longer shutter speeds to properly expose ambient-lit background. It helped to create this image. As one of the lighting staff rushed past me, I made this exposure. The shadow that appears in his wake was created by setting the camera's  flash synchronization to Rear Curtain. When so set, the flash fired just before the shutter closed. This lit my subject at the final moment of his movement across the frame.

When I looked more closely at the image, I liked the way the edge of the light fell off at the lower edge of the frame. It hides the hard shadow at my subject's feet, a sure indicator that I used a near-camera flash to achieve the effect. Had I used a light stand, I could have locked my flash position and had my subject move in and out of the light puddle. But as I said, using a light stand in so crowded an environment is an accident waiting to happen. If a future assignment allows me that luxury, I'll certainly remember that lighting the lower edge of the frame can be easily controlled.
Posted by Tom Jung Photography at 12:10 PM No comments: Links to this post