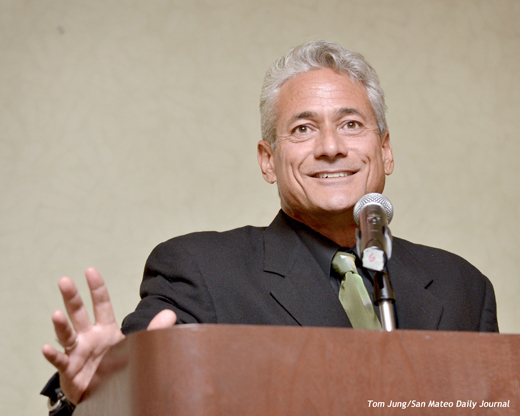 Had an interesting evening photographing Olympic Champion Greg Louganis when he spoke at a fund-raiser in October of 2012. I employed a high ceiling bounce, complete with Black Foamie Thing, to eliminate head-on glare. I know that in these situations I've said that flash should be avoided, but there were two important factors that influenced my decision to use it. First, there was no supplementary lighting on the podium, and more importantly, I wasn't the first one to use flash. The organization's own "hired gun" had a powerful Quantum flash mounted on a light stand strategically positioned in provide lighting for the speakers. Since my light would be bouncing off the ceiling, it would be far less distracting so far as the speakers were concerned. It's not every day you get to be the good cop.

As you might recall from my earlier posts, you need to take a lot of shots to get one that will work. Here, the important things to watch out for are the placement of the hands and the "view-ability" of the face. With the microphone off to the side, we can get a clear view of his face. I might have preferred to have the hand a little closer to his face, but this was the best of the group.

One other important consideration is whether a speaker gestures with his left or right hand. I've found it easier to get an acceptable image if you photograph from the speaker's weak side. This way the arm never crosses in front of the body, making it easier to make a photo that appears to be more open. 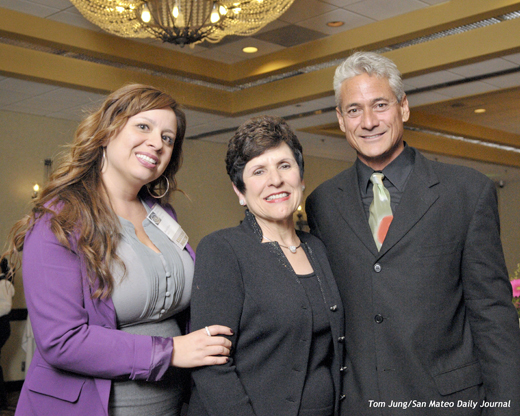 Getting It Together: Setting up this shot did require some prompting on my part. Right after the speech, I immediately went to Mr. Louganis, introduced myself, and spoke of my good fortune in being assigned to hotograph an Olympic Medalist. Then I added, "I'm sure Paula (the event's honoree) would be thrilled to have a photo taken with you. Would you help me with this?". Presented that way, how could he refuse? Excusing myself briefly, I found Paula and told her I had arranged for her to be photographed beside Greg Louganis, which pleased her to no end. As I brought her to where Mr. Louganis was standing, I managed to to convince Michelle, the event coordinator, to join us.

Bouncing From Behind: For this small group shot, I positioned my subjects about ten feet in front of a convenient wall. I did not make a custom white balance for the shot because the beige color would not have a negative impact on the overall coloration of the shot. One nice thing about using the BFT is that it acts like a barn door to force the light to bounce from a relatively high position. This can be helpful when photographing people wearing glasses because it reduces the on-axis bounce-back. While the light is soft, it is directional due to the relatively high position.

Shadow Fill. I noticed that the "chin shadow" for Mr. Louganis is quite dark, while Paula's shadow (center) has some illumination, and Michelle's shadow, looks very well filled. I wondered about this until I realized that the fill light was provided by the clothing and skin of the two ladies, but Mr. Louganis, clothed in black up to his neck, had no fill whatsoever. This is totally beyond my control, but at least I now know why it's happening.

Something To Remember: One final note. While I did submit this shot to the paper, I didn't think to thank, then dismss, Michelle so I could get of shot just of Paula and Greg. Had I thought of this, I would have had a bit more freedom in composing the shot. Fortunately for me, I could produce a suitable 8X10 by simply cropping. 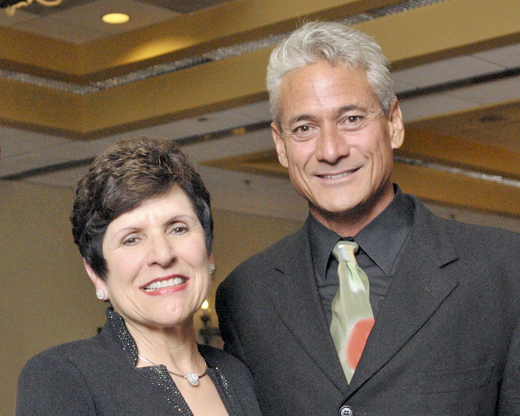 While this is still an acceptable shot, it would have been much better if I could have stepped back a little reduce the "in your face" aspect of this closeup. But this was a lesson learned, and I'll add it to my list of things to remember the next time I'm called upon to make a similar photo. I suspect my pennance will be twenty minutes of age appropriate re-touching, which could have been avoided if I had thought to isolate my two subjects and shoot from a greater distance.
Posted by Tom Jung Photography at 12:10 PM No comments: