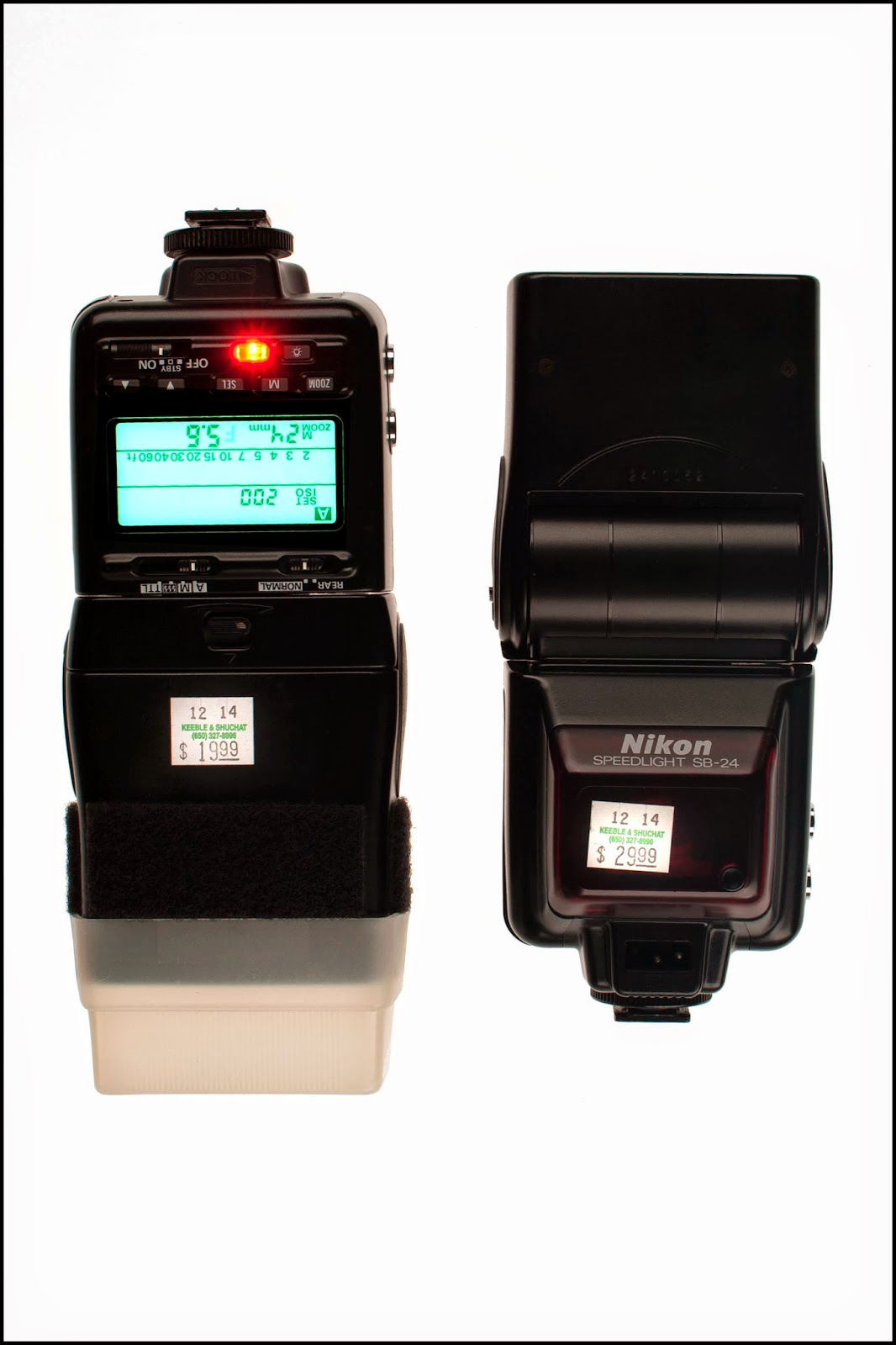 I was photographing some high-speed action with a Nikon D70 and an SB-800 speedlight connected together by a neutered SB-17 flash synchronization cable. I started to miss the convenience of having a "neutered" flash like the Lumopro 160*. Unfortunately, the Lumopro lacks a non-TTL (Through The Lens) exposure option, making it less convenient in a "run and gun" environment.

I got really lucky recently. I was at Keeble and Schuchat in Palo Alto on Saturday and saw a Nikon SB-24 speedlight in used equipment section. I convinced myself that I didn't need a fifth SB-24, although its price ($29.99 with no box or accessories) was very reasonable, considering its superior build quality when compared to a used Vivitar 283. I decided to pass. But by Monday, I decided to buy it, and when I returned to K & S I found that there were now TWO SB-24s, the second being cheaper than the first and sold with a Stofen Omni-Bounce diffuser dome and the requisite black Velcro strips. Rather than debate the issue, I bought them both.

Why the excitement over a flash that was first introduced in 1988? It has both full manual exposure control along with non-TTL exposure control. It had a zoom range of 24mm to 85mm, and no built in slave, minimal by today's standards. But it had build quality that matched its $249.99 price tag when it first appeared. Solid, reliable, and a real bargain today. For a while, they were the hot item, thanks to David Hobby and this post from 2006. Today on EBay they go for $40.00 and up, depending on whether the original box and pouch are included.

OK. Now I had two new speedlights to play with. I decided to try to "neutralize" the TTL function and the Speedlight Present contact so I could use it with my Nikon D70s at shutter speeds higher than the manufacturer's 1/500 synchronization ceiling. I took a deep breath, found my smallest Phillips screwdriver, and went to work.

Warning: If the flash has been used recently, it may still carry a residual electric charge in its capacitors. The high voltage jolt from a fully charged capacitor could give your a painful electric shock, which could be fatal. Obviously, I can't take any responsibility if you attempt this conversion on your own. But if you're going to attempt this modification, play it safe:
Proceed at your own risk.

Update: I strongly suggest that you purchase a good, proper screwdriver before proceeding. The tiny Phillips-head screws require a very small screwdriver, and the self-tapping nature of the screw itself will require a fair amount of force. I purchased  one (a VaCo P12) for $12.00 15 years ago, and it has given me excellent service. Those cheap mini-screwdriver sets? They'll just burr your screw heads and make the screws impossible to loosen or tighten. As somebody once said, "You buy the best only once". Good advice when it comes to tools!


Take a look at the SB-24 hot shoe (Photo #1). We can see the three pins surrounding the Trigger Contact (center): Speedlight Present (upper left), Quench (lower left), and Ready To Fire (lower right). If we disable these three contacts, we cut communication between the flash and the camera which will allow the use of shutter speeds past 1/500 of a second on the Nikon D70. Reminder: This photo shows the front of the base plate facing up.

Start the process by removing the four exterior screws at the bottom of the speedlight (see down arrows). These screws are small and short, so keep an eye on them. Draw the base plate of the speedlight away from the main body.

In Photo #2, you can see the base plate positioned for better viewing. You can see the interface wires, and you should be thankful that you won't have to deal with them. Just be sure that you don't accidentally pull any out of their junctions.

You can see in Photo #3 that there are three screws (white arrows). These screws hold the flash foot to the base plate. Remove these three screws. You'll notice that they are significantly longer than the four holding the base plate. When the screws are removed, draw the foot away from, and off, the base plate. You do not need to remove the green circuit board, and you shouldn't try to!

In Photo #4 you can see the four spring-loaded contacts. Remove the two top pins and the single lower pin as seen in the photo. No need to remove the springs. Reminder: This photo shows the front of the base plate facing down.


In Photo #5, the three outer contact pins have been removed, leaving the centrally located Trigger Contact. Now slide the flash foot back onto the base. Be careful to properly align the springs with their proper holes, and the two side-mounted grounding contacts (seen in green) with their own holes. Replace and tighten the three long screws, and be sure they are tight!. Finally, replace the four short base plate screws. 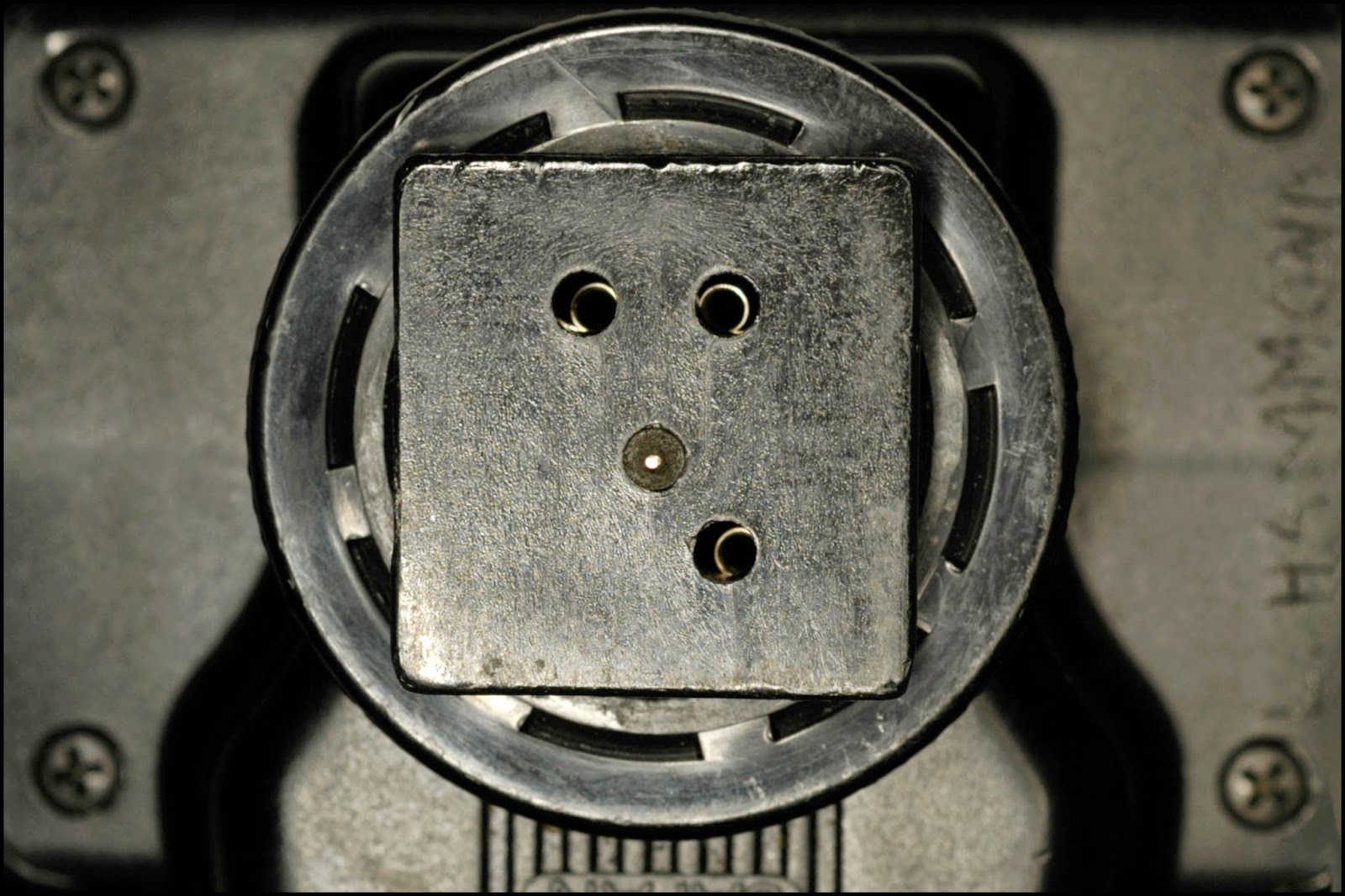 The foot, shown in Photo #6, is fully re-assembled and ready to go. You can still see the springs deep in their recess. You could re-install the contact pins, but why bother? The TTL functions work with film and early issue Nikon DSLRs. However, the non-TTL automation still functions and will give you satisfactory exposures under normal conditions, providing you take a few moments to "tweak" your camera's aperture because non-TTL flash automation sometimes overexposes the image. Stop down your lens aperture 1/3 or 2/3 stops until you get exposure levels that you like.

Some final notes. Before I bought the units, I checked to be sure that they did indeed function, and confirmed that I had return options if the units died on the way home, something EBay vendors almost never do. Also, it you don't have access to a D70, D50, or D40, none of these modifications will do anything to improve your flash sync speeds.

Over the next few weeks, I'll be re-conditioning the capacitors to get them ready for some serious flash work when the weather gets better.

*"Neutered", in this context, means that the "Flash Present" contact has been disabled. If a Nikon D70 doesn't detect a signal for the Flash Present contact, it won't lock out flash synchronization at shutter speeds faster than 1/500th of a second, the manufacture's top speed for full access to iTTL flash metering.
Posted by Tom Jung Photography at 12:10 PM No comments: