The Telephoto Lens In Low Light 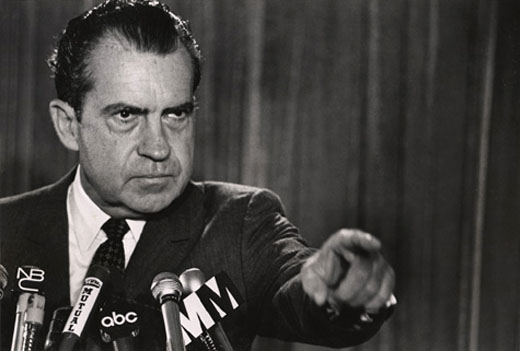 David Douglas Duncan (born January 23, 1916) is another great photographer from the bygone years of black and white film. He was one of the first photojournalists to champion Japanese cameras and lenses right after World War II. In fact, Nikon may well owe its popularity to his early adoption of Nikkor lenses. His photo books include Yankee Nomad, War Without Heroes, and Self Portrait USA, all three of which I own.

The lead photo has a story that illustrates the constant battle between image quality and film speed. When this photo was taken, Kodak's Tri-X, the industry standard for photojournalists, was rated at ASA 400, but photographers using developers such as Acufine were "pushing" to ASA levels to 1200, and beyond. The story goes that Duncan, along with the rest of the press corps, was stationed in the press "pit", trying to photograph under difficult lighting conditions. At the time, fast lenses were not that common, probably because the technology of the time limited the size and types of lenses that could be manufactured. However, Duncan was armed with a 400mm Leitz 5.6 telephoto, which he had mounted it on a tripod. Because he had a tripod, he could use exposure times of 1/30 to 1/60 of a second if he shot the big lens wide open at 5.6, exposures within the range of an un-pushed ASA of 400.

With things pretty much bolted in place, how did he go about making these insightful images? According to Duncan, he waited for his subject paused while thinking about how to answer a questions, or sat intently, listening to the proceedings around him. Bet on it, people sit very still when contemplating what to say, or what to think. By waiting for this critical moment, Duncan captured some of the most revealing images from the Republican Convention.

How Long An Exposure? There is an old rule that the longest shutter speed you can successfully hand hold (without support) is the reciprichol of the focal length of the lens. For example, a 400mm lens should never be hand-held a speeds longer than 1/400th of a second.  This was derived from a film world, but for those using APS sized DSLR cameras, you would do well to up this value by the lens magnification factor of 1.5 which would give you a "hard deck" value of 1/600th of a second, or there abouts. 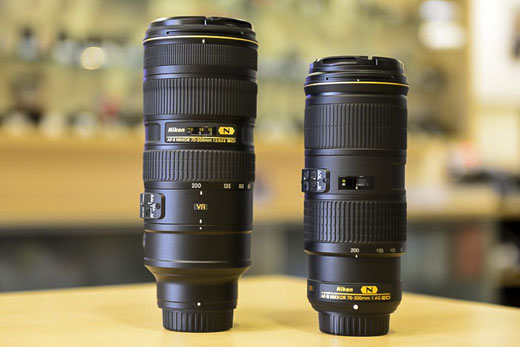 I asked myself this questions some years back. I was getting ready to photograph the indoor graduation ceremonies for the Adult School and was debating what features I should look for in a long lens. I knew that my existing lenses were fast enough to capture the event, but not long enough to produce any interesting close-ups. The choice came down to two different possible solutions: a zoom lens with Vibration Reduction, or a prime lens with a large open aperture. At this point in time, the 70-200 2.8 was completely out of the question.

This close-up of the lens name plate came from Ken Rockwell's excellent evaluation on this lens. Read the article, in its entirety, by clicking here. The specifications read as follows:
At first I thought I could live with a 120 mm 5.6 lens, since I thought the stability provided by the Vibration Reduction would allow me at least 2 stops of additional "speed", meaning that I could effectively shoot 1/30 of a second, based on the aforementioned relationship between focal length and slowest shutter speed. (Calculation check: Maximum useful exposure time for a 120 lens is 1/120 of of a second, so two "stops" of additional exposure would yield the 1/30 value mentioned earlier). One might conclude that VR is like having a built in tripod, making sharp images possible with long lenses and relatively long exposure times.

An important comment on the value of VR comes from David Ziser, the inventor of the Zumbrella and the Mick Jagger of Wedding Photographers. Okay, bad joke. He is an experienced wedding photographer whose working style I admire greatly. His take on VR lenses (He's a Canon guy, and they call it Image Stabilization, or IS) is simple: IS helps you produce acceptably sharp images more often. In essence, VR/IS is not a slam dunk when it comes to creating sharp images.

Check this image, a reject from an earlier assignment. The lens was stabilized, and the image reasonably sharp. But the subject's near hand? Blurred from a simple hand gesture. 1/125 @ F 3.5, ISO 800. Focal length was 110mm, so I'm very close to the longest non-stabilized exposure time. In this case, it was subject movement, not camera shake, that made this image unusable. 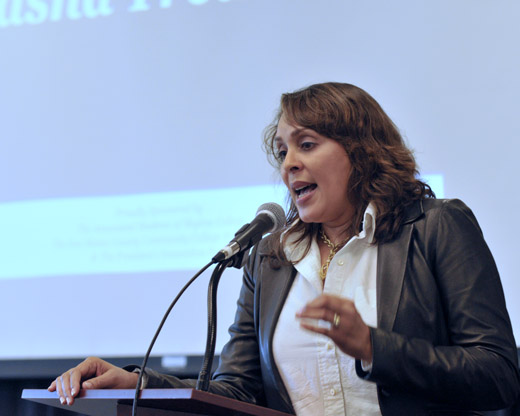 Duncan was wise to wait for his subject to pause before making his photos. Even with all of today's technical advantages, the photographer's timing becomes the critical element, since Vibration Reduction, high native ISO values, and affordable, quality fast lenses make Duncan's use of the tripod less of a mandate for making quality "podium" photos. But after all is said and done, the skill set the photographer brings to the game outweighs any advantages modern equipment might provide.

﻿
Posted by Tom Jung Photography at 12:10 PM No comments: