When we left our intrepid hero, he was struggling to make sense out of a non-automated flash that didn't provide a non-through the lens (TTL) or an  iTTL exposure control option. His mind was reeling with thoughts of diminished light intensity over unknown distances, the Inverse Square Law, ISO sensitivity settings, and the unfathomability of measuring a burst of light that would last less than a 1/1000th of a second.

Guide numbers to the rescue!

The guide number has been relegated to the status of "arcane", but once upon a time, it was the only way photographers could get reasonably close approximations of correct flash exposures. And until somebody got the idea to put an adjustable dial as a reminder, photographers had to tape this valuable information onto the backs of their flashes, or commit the data to memory. In fact, I have it on best authority that press photographers of yesteryear set their Speed Graphic shutters to 1/200 of a second, their apertures to F 16, and their distance scales to 10 feet. So adjusted, the photographer just had to stand about 10 feet from the subject, insert a flashbulb into the flashgun, and make a shot that would be properly exposed and in focus. Any modest variations in distance would be within the lens' depth of field, resulting in a reasonably sharp photo most of the time.

The Guide Number for a given ISO/ASA value brought together the two factors that governed flash power, flash to subject distance, and aperture setting, and combined them into a relatively simple formula:

Establishing Guide Numbers: In come cases, flash and speedlight manufactures will suggest guide numbers for the products, providing one number for each popular ISO/ASA setting. However, most of these numbers assume that you'll be photographing indoors with a 10 foot ceiling and light colored walls. When working outdoors, you'll find that relying on these numbers will result in significant underexposure. This means that you'll need to determine your own guide numbers if you plan to work outside.

For these base-line exposures, I set a Nikon D70 camera in the manual mode to 1/500 of a second, ISO 200, and Flash White Balance. The Nikon SB-800 speedlight was set to 1/4 power with a beam spread of 35 mm. It was mounted on a light stand 10 feet from where I stood. I made these photos outdoors to simulate the how the SB-800 would behave outdoors where there were no walls or ceilings to reflect additional light onto the subject. These "selfies" were made with a Tokina 12-24 F 4.0 held at arm's length. 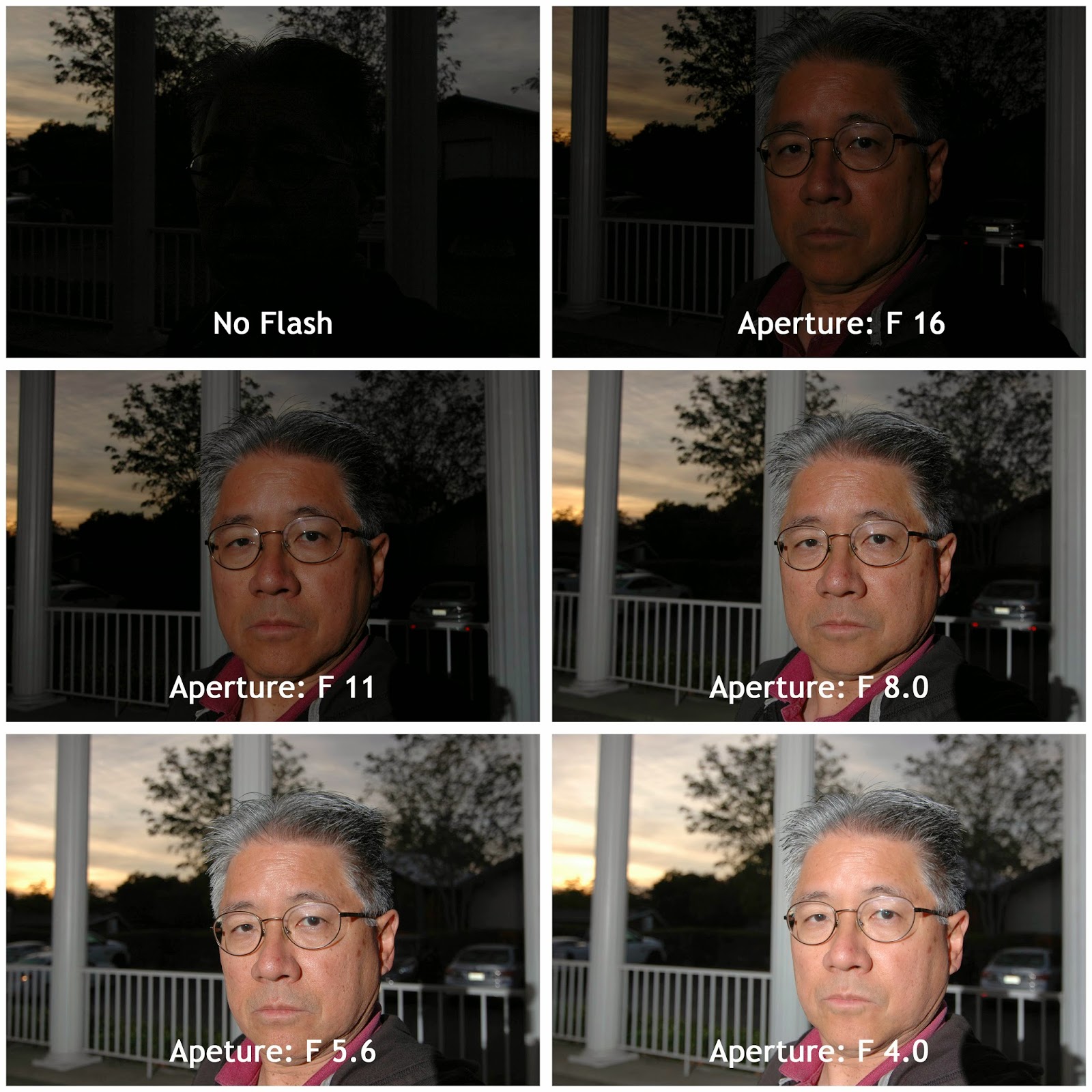 As you can see, this early morning sequence of photos was taken at one-stop increments.  Several things become apparent. First, there is an optimal aperture setting for photos taken with a flash-to-subject distance of 10 feet is probably F 8.0. (I chose this slightly underexposed image to prevent blocking of the highlights). Second, the direct lighting from the speedlight produces some very harsh shadows and lots of specular highlights (glare). Lastly, flash on the main subject (my face) does have an impact on objects in the background, as you can see by the pillars that are behind me. As I opened up my aperture, the sky would brighten accordingly.

Now For The Magic: Through some mathematical quirk*, you can calculate the guide number by multiplying the Distance (10 feet) by the best Aperture Setting (8.0) to get a Guide Number of 80for this specific combination of flash output, beam angle, and camera ISO. In use, you simply divide the guide number by the flash-to-subject distance to determine the proper aperture. For example: For a flash distance of 20 feet:


Ambient Light: The existing, or ambient, light was not a factor in the initial series of photos. In fact, the 1/500 of a second exposure time was chosen to minimize any influence it would have on the foreground exposures. When when you start utilizing the background as part of the overall composition of your image, the background exposure becomes more important. Remember, the aperture controls the flash exposure, and must be set first and left alone. The exposure time controls the ambient light, which in most cases, will be the background. This you'll do with the shutter speed. 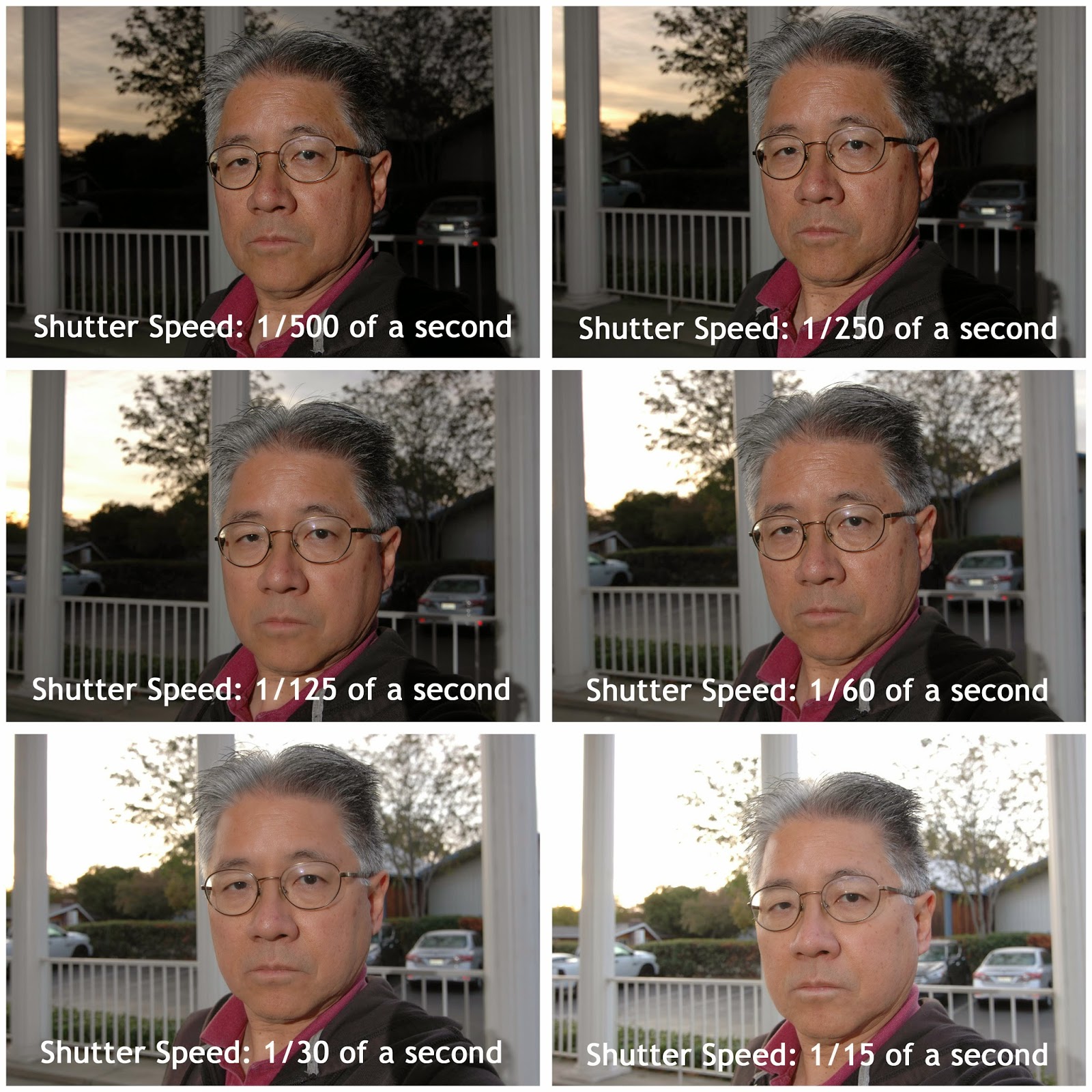 In this second series of photos, I left the aperture set to F 8.0 and lengthened the exposure time in one stop increments. Notice that the background gets lighter as the exposure time gets longer, exactly what you'd expect. However, when the exposure time reaches 1/30 of a second, you'll see that my face is starting to get lighter. At this point, the ambient light is now strong enough to add to the light provided by the flash, giving me a lighter foreground (face). This illustrates some of the problems you'll encounter whenever you try to match ambient with supplemental flash. A simple solution is to minimize the ambient's influence on the foreground in any way you can.


For this last shot, I stood in the alcove of my hotel's entrance, effectively blocking all of the natural ambient lighting. I bounced the flash off of the walls and ceiling and had to both increase my flash output to 100% and narrow the beam angle to 105mm to compensate for the light loss whenever bounce flash is used. I made the shot, called it good, and left for breakfast.

On viewing the image, I was bothered by how artificial it looked. Then it occurred to me: The soft and even bounce flash didn't look right when compared to the relatively contrasty morning light. The prominent background shadows don't match those in the foreground, something I hadn't thought about at the time.

Determining you own custom guide number can be an interesting exercise in understanding how flash works. But in researching this post, I learning something more profound when I examined that last image. Obtaining a properly exposed image is only half the battle. The continuity of lighting, or put another way its believability, is the finishing touch that can make, or break, the photo.

*It has something to do with the square root of two.
Posted by Tom Jung Photography at 12:10 PM No comments: