In my last posting I offered an opinion the there was an affordable  flash that would be an excellent first purchase for the event photographer who wants to up his or her game. It is the Adorama Lithium Zoom TTL R2, aka the Godox V860. I added this powerful flash to my collection because it utilized an 11.1 volt rechargeable lithium-ion battery that provides very fast recycling time. I have one for Nikon and one for Fuji, and the latter has already earned a permanent place in my bag. I suspect the Nikon version will soon replace my speedlight plus SD-8a battery pack for "running and gunning" where the quick recycle time is a welcomed plus.

If you read my previous post, I suggested the AA version of the flash, the Flashpoint Zoom TTL R2, as a starter unit. I actually jumped directly to the Lithium Ion version because I already had six batteries I used with the earlier R1 flashes, so I had no additional expenses beyond the initial purchase. If money is an issue, this less expensive AA version will serve you well in the beginning.

The best thing about this Godox flash is its ability to properly interface with the (optical) Nikon Creative Lighting System (CLS) which gives you control over multiple remote flashes using the commander function available through the pop-up flash on the mid-priced DSLR bodies. If your body doesn't have this feature, you could purchase a Nikon SU-800 to serve as a controller, program a suitable Nikon speedlight, or purchase and configure a less expensive Adorama R2 flash, which is actually the least expensive alternative.

There are limitations to this handy feature: The Nikon CLS system relies on Pulse Modulated Light communication between the on-board commander and the remote speedlight. As such, the user must consider:

So What Can I Do Now? For the moment, let's assume that your camera body has the commander function, and that you purchased either of the two recommended Adorama/Godox flashes. How can flash up your game at no cost, or with a modest investment in equipment? 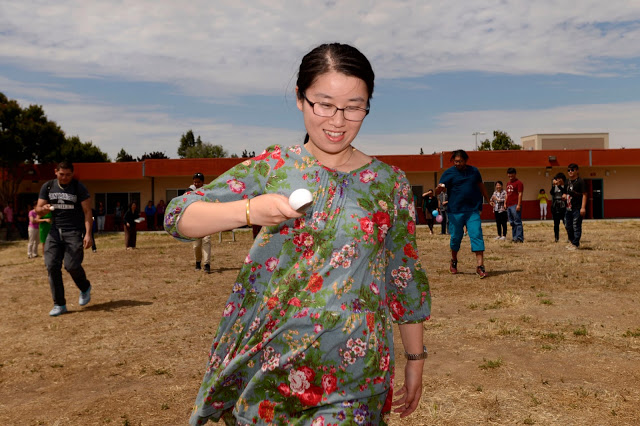 Outdoor Fill Flash: By simply mounting the flash in the hotshoe and aiming it directly at your subject, you can add detail back into the shadows. If you look at the underexposed people in the background, you can see that the exposure was set manually to enhance the sky and clouds.  The flash was set to fully expose the foreground subject, and because she is brighter than the background, the viewer's attention is drawn directly to her. No cost. 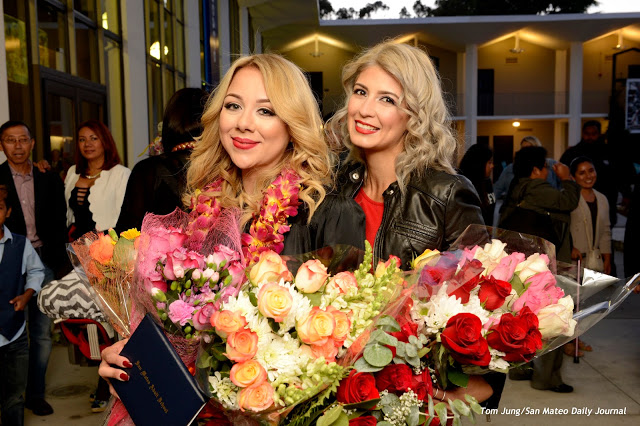 Outdoor Bounced Main Lighting: I am standing with my back to the wall beneath the second floor walkway. The walls are off-white in color, so any color contamination is minimal. The walkway above me helps concentrate the light on my subjects, who are only 6 feet away from me. The flash is still mounted on the camera, but aimed above and behind me. No cost. 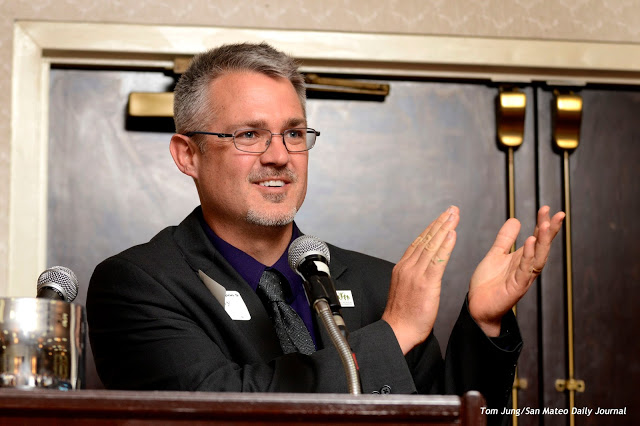 Indoor Backward Ceiling Bounce: With the help of a piece of soft plastic and a rubber band, you can re-direct bounced flash at the ceiling behind you, which gives the light a more pleasing appearance with full illumination in the eyes. Typical ceiling bounce gives "raccoon eye" shadows, but re-directing the light in this manner will eliminate the problem. Check out the Black Foamie Thing. Cost is $3.00 or so. 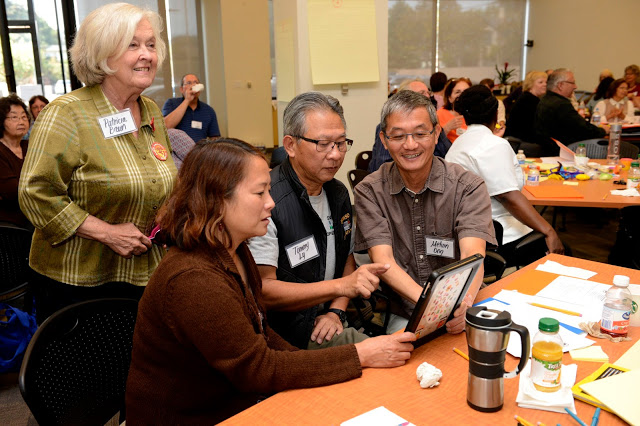 Ceiling Bounce With The Flash's Built In Bounce Card: Nearly every modern accessory flash has a built-in bounce card hiding inside the flash head. If it didn't, you could do what photographers did in the last century: use a rubber band to attach a 3" x 5" index card. Easily withdrawn, the bounce card provides a tiny bit of light to illuminate the raccoon shadows that result from "straight up" ceiling bounce. There is a "Goldilocks Zone" (not to hot, not too cold, but just right) from four to eight feet where the card is most effective. Too close and the results are too "hot", too far and the improvement will be negligible. No cost. 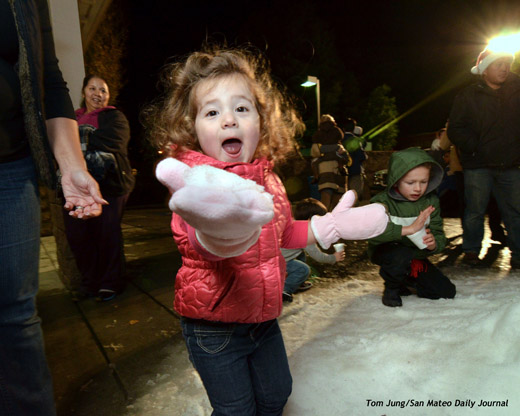 Stofen Type Dome: Whenever a flash or speedlight goes into my bag, it wears a diffusion dome of some sort. I find it much faster to remove the dome for bounce shooting than to fumble about finding and installing it when needed. The dome improves your lighting in two ways. First, by elevating the head to a 45 degree angle, you raise the position of the light and additional 2-3 inches higher, which re-distributes the placement of the highlights on your subject's face. Second, it doubles the size of your light source, which softens the edges of your shadows especially when photographing at relatively short subject-to-camera distances. Cost about  $10.00 to $15.00, depending on the brand. 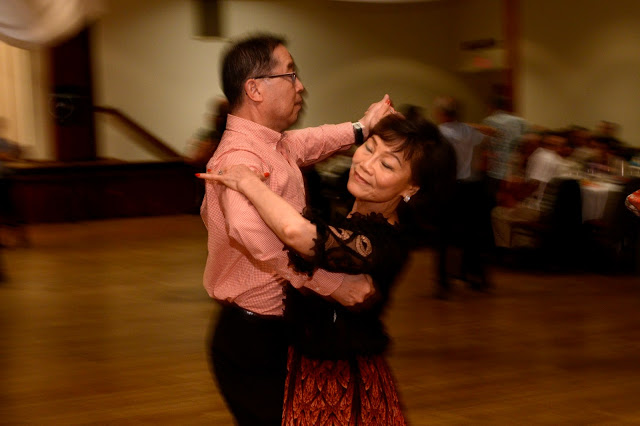 Gary Fong Light Sphere: If I were to choose one light modifier for your on-camera flash, it would be the Gary Fong Light Sphere. I was a relatively early adopter, and own almost every iteration made over the last 10 years. The light is placed well above the lens axis, and the relatively large lighting surface decreases the chances of burned out highlights. It is the absolute go-to modifier when you don't have walls or ceilings to bounce from, as when I found myself in the middle of a dance floor. When you follow the simple exposure guidelines (high ISO setting, underexposed background and slightly under-exposed flash-lit foreground), you really can't go wrong.  The Adorama's flash head is big, and it Light Sphere's current "universal" mounting system will just fit the Adorama's large head.They cost about $50.00.

Off Camera Flash: One of the best known proponents of off camera flash photography is David Hobby, a former Baltimore Sun photographer turned full time blogger. I started reading his blog some time after I began building my CLS collection of commander and remote flashes, but after studying his postings, have come to rely less on TTL flash automation, and more on  his manual approach to flash exposure. If your camera has the flash commander function in the pop-up flash, you can immediately explore the possibilities of creative light positioning and enjoy the resulting uptick in the quality of your photographs.

Pop-Up Commander: To configure the pop-up flash to perform as the controller, click here. It's kinda corny, but it works. You may need to view it a few times before it makes sense. 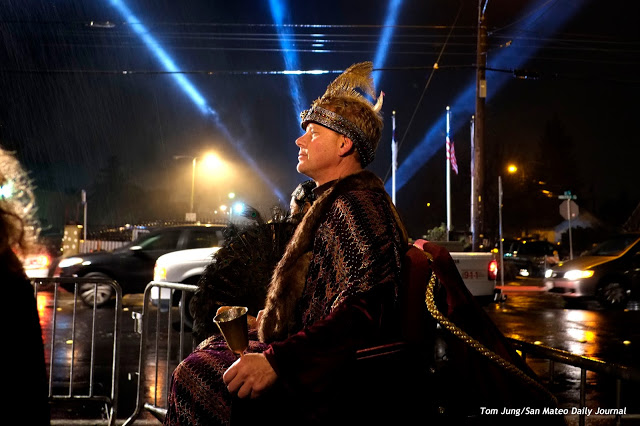 Off Camera Flash With Side Lighting: If you look at the  shadow cast behind my subject's ear, you can tell the the flash was placed to my left. The highlights on his edges of his nose and cheek come from a spot light located just across the street. This photo is not how you expect flash photographs to look. The flash was held aloft about 7 feet from my subject. Cost would be nothing if you have a tall friend with long arms, but  if you need to buy a monopod, you can buy one new for $30.00. (new), or you can look for one at a garage sale or camera store junk bin for much less. Don't try to use a selfie stick because they just aren't strong enough.  Attach a cold shoe on the threaded end (about $10.00) and you have it made. Of course, you could get an old broomstick and attach the flash to one end using duct tape, but you'll earn no style points! 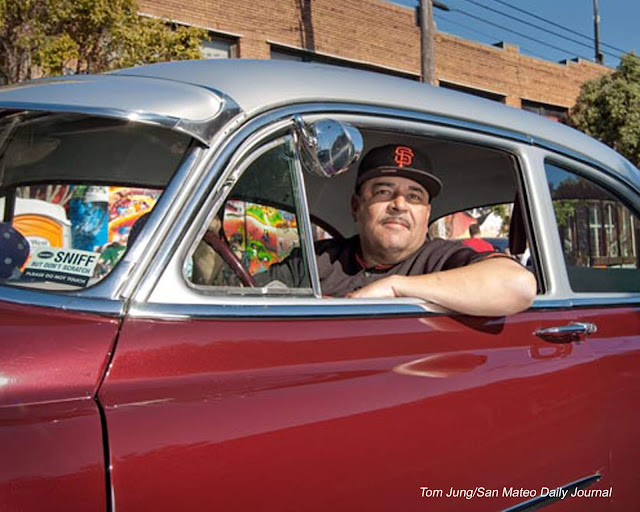 Off Camera Flash With A Shoot Through Umbrella: A shoot-through umbrella was positioned just outside of the field of view at camera right. The "elbow" is underexposed by about a stop, and the flash output decreased by about one-half. It's a trial and error proposition, but with a little practice, you be producing images that are very acceptable on the first shot. It's all in the settings. The cost for all of the necessary bits may be more than you care to invest, but the results will be worth it. Some details on how I carry it can be found here.

The next post will talk about transitioning from Nikon's native optical triggering (CLS) to the Adorama R2 Radio triggering system.
Posted by Tom Jung Photography at 12:10 PM No comments: Links to this post