My Encounter With Mrs. Murphy's Son 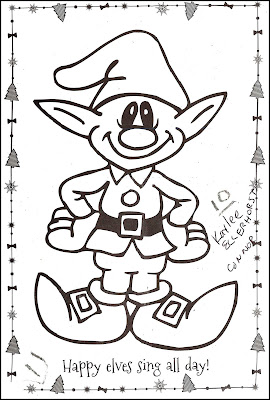 If misfortunes come in fours, I reached my quota on this assignment.

This one was relatively simple, as I've done it several times before. The Golden Gate Harley OwnersGroup (HOG) was making its annual toy run to the San Mateo Medical Center. The toys would be sorted for distribution to hundreds of young patients in San Mateo County. The HOGs were scheduled to arrive at 10:30 am, Harleys a’ roaring, to deliver the toys they collected. They would bring the toys to the hospital's storage area where volunteers would sort them by gender and age appropriateness. Young guests and their parents would be there to sing Christmas carols, eat snacks, and receive a present from Santa himself.

Since my office is on way to the hospital, I left my primary (Fuji) kit, along with my press pass and my list of contacts in my storage closet, assuming there would be enough to time to fetch them on the way to the hospital. Come Saturday morning, I allowed myself an hour to drive from the city, get my equipment, and arrive at the hospital with plenty of time to get a decent shot. As an afterthought, I packed my Fuji X100S with my wide angle and telephoto adapters, plus a singe Metz flash, just in case I wanted to go "minimalist". I chose the Metz because I thought I might need the TTL option.

Bazinga! On the way down, traffic started to slow due to a traffic accident that had just been pulled to the shoulder. This unexpected delay caused me to re-think stopping for my main kit, since I was already carrying a camera and flash. So I decided to go straight to the hospital, leaving my press pass, primary cameras, and assignment correspondence safely locked away. After all, I'd been to hospital many times, and could probably drive there in my sleep.

Not So Fast, Wise Guy! I approached the intersection where I thought the hospital should be, and of course, it wasn't there. I circled the block a few times, to no avail. Was it 37th Avenue, or 39th? Just then, I saw a mail carrier, and asked, "Is there a hospital around here?" Luckily for me she knew where it was, and pointed me in the right direction. I was parked two minutes later.


And You Are...: Walking towards the front entrance, I looked around for somebody who could help me. I specifically looked for somebody who had any of the following: a Name Badge, a Walkie Talkie, or a Santa Hat. I found a person who had all three, and now he and I are walking into the Hospital reception area to meet the event coordinator. Luckily for me, I am presented to Glynis, the Mistress of Ceremonies, who immediately recognized me. This was a relief. Now that I was now "official", I started to get my equipment in order.

Got A Pen? Now I discovered that my minimalist kit was missing a pen and a pad of paper to record names and vital statistics. Instead of running back to my car, I went inside and borrowed a crayon and a page from a coloring book on which to write. You can see that I actually used it. Look closely and you'll see the names of my two photo subjects, written with a pen loaned to me by a better prepared adult. 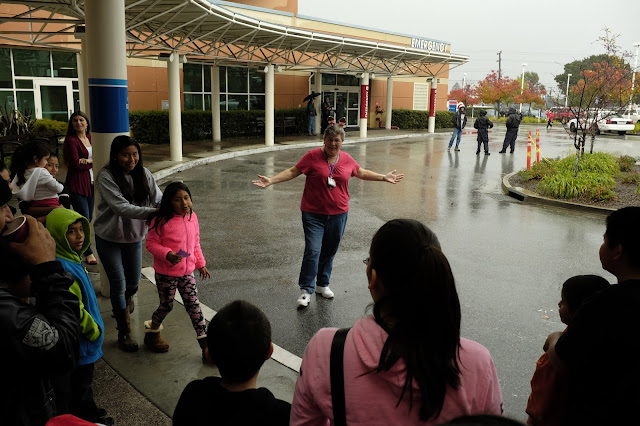 It was still drizzling, so we all took cover under the awning that covered the entrance. We were now in shadow, as you can see in this test shot. Flash was the only way to make a decent exposure. I decided to bounce the flash from the underside of the awning which was, thankfully, white in color. I tilted the head straight up, boosted the power to Full (manual), and made a shot.The exposure mode was set to Aperture Priority.

I was surprised by the results. You can see from this shot that the flash had just enough power to properly illuminate the foreground at F 5.6. Notice how even the bounced lighting is.

Glynis did a great job of keeping the kids entertained while waiting for the HOGs to arrive. Off the curb, she and her friends are at the very edge of the bounced light. The light is still quite even, although Glynis' daughter, at the far right, is overexposed a bit. Had I submitted this image, I'd have burned her in a bit, since she tends to draw the viewer's attention because she's noticeably brighter than the others.

Santa finally arrived, and I was able to get this shot as he stood just below the edge of the awning. The flash illuminated his face, while the relatively brief exposure time helped me keep the exposure of the sky under control. It did prove that this bounced flash approach might actually work in daylight if I had could increase my light output using multiple flashes. I had Santa direct his gaze at some imaginary children standing behind me, but after that motorcycle ride in the rain, Santa wasn't at the top of his Ho Ho Ho game! More motorcycles would have helped the background, but only six bikers braved the weather. The rest arrived in trucks and SUVs.


Santa was hugged by Kaylee and Connor, the grandchildren of one of the doctors at the hospital. This would be Kaylee's tenth Christmas hug, and with that little backstory, I thought I had the shot. I managed to get a hint of a smile from Santa, which helped the photo along. I thought I had the shot, so I started to think about getting some breakfast. Thankfully, I followed Santa inside, hoping for a better photo.


Since I already had permission to photograph Kaylee and Connor, I had them sit with Santa for a quick last shot. I had no time to work the shot, The bounce card provided enough additional light to brighten up the eyes, but not enough to completely over-power the incandescent top lighting.

Back in my office, I realized how much better the last photo was. I was so fixated on the success of the outdoor bounced flash that I didn't notice how little context my first choice had. In fact, that photo was downright bleak. In this last shot, the Christmas Tree and the hint of presents in the background add to the holiday spirit, and was one I ultimately submitted.