Wheeling and Dealing: I was in Las Vegas for a sporting goods trade show, one where vendors and dealers get together to promote new items and place orders. The sporting goods industry is big in the United States, and the conventions are equally so. Product promotions, lectures, demonstrations, and marketing workshops are all available to stocking dealers, while common enthusiasts like myself who manage to obtain the coveted tickets must be content to just to gawk at the latest and greatest. I was motivated not so much by the show itself but with a prospect of spending some quality time with some old and dear friends. 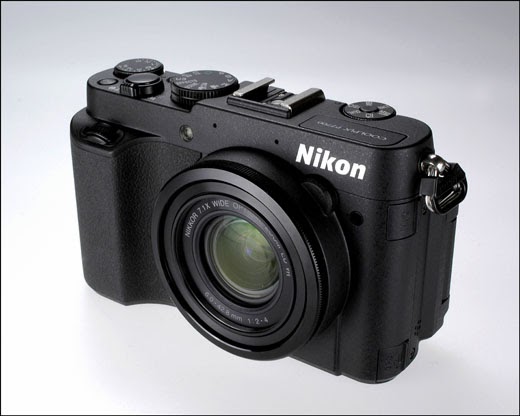 As you can see, this isn't a small time event. The enormous computer generated banners made it easy to find the big budget manufacturers. It's pretty obvious that Perazzi is not a Mom and Pop operation. For this show I was traveling light, carrying only my Nikon P7700, putting forth my best efforts to make some reasonable photos. These two available light photos are not remarkable, but they served as small challenges to be met by applying some new or well established technique whenever possible. In Photo #1, I used a sturdy display fixture as  a rest for my camera. In Photo #2, I used the reticulated LCD panel to facilitate a low shooting angle to compress the distance between the ceiling banners and the people on the floor.

More Selfies: I wanted to experiment with some outdoor flash techniques from the Neil van Niekerk playbook. For this experiment, I set my camera to 1/30, F 3.2, ISO 200. As it turned out, I probably could have used a higher shutter speed. Photo #3 was made without the benefit of a speedlight. For the next shot, the flash was on and functioning in the TTL mode (Photo #4). The light was bounced off of a nearby granite building at a range of about 3 feet. The light is coming from camera left, providing some fall-off on the side of my face. Notice that there is a highlight coming from "New York New York" reflected on the paddle (side arm) of my glasses, a nice effect.

Of course, if I had been Joe McNally, I'd have added a gelled speedlight positioned to provide a "neon" highlight on the back of my head. Easy to do with a truck load of equipment and a handful of eager assistants, but difficult when it's just you and an idea.

Convenient surface can usually be found if you use your imagination. Obviously, these two selfies weren't made from the exact same position.

The Nikon P7700, as I mentioned in earlier posts, has the ability of synchronize flash at very high speeds. In this shot, the shutter was set to 1/2000 of a second, the aperture set to F 2.0, and the ISO set to 100. The flash output was set to 1/4 power in the manual mode to prevent "clipping" of the flash pulse. In this shot (Photo #5), the bounced speedlight was able to equalize the power of the sun. I was standing in the shadow of a nearby building so the sun was not contributing to the light hitting my face. The flash was mounted on-camera, and the head turned 180 degrees relative to the lens axis and tilted upward. Granted, the quality of this bounced light was very different from the harsh sunlight hitting the building down the street, but it proved that if bounced from a short distance, one could achieve a pleasing exposure balance between the foreground (me) and the background.

Hey! Over Here! If you're wondering why I never seem to be looking directly into the camera, the reason is simple: When the reticulated LCD panel of the P7700 is rotated to face forward, it is a few inches to the right of the lens axis. When adjusting the composition, I am actually looking to the left of the lens, resulting in my off-center gaze.

Party Time: These same techniques can applied to groups, but there are some hazards. The more people in the shot, the greater the distance between the flash and the subjects. This is easily understood with direct on-camera flash, but the distance increases when the light is bounced, and diminished by the absorption of light by the bounce surface. For this shot, the ISO was raised to 800, the shutter 1/125, the aperture F 4.5. Here's where the smaller-than-APS sized sensor becomes a disadvantage in dealing with noise. I am sure that had I used my D7000 the results would have been better, but that's a lot of metal and glass to carry compared to the relatively tiny P7700.

For this shot (Photo #6) I chose to use the "behind you" bounce. While I was forced to sacrifice a great deal of light output, this technique allowed me to light my subjects from a much higher vantage point . The flash was about 6' off the ground (I'm 5' 6" tall) and angled upward, putting it well above my head. I would have needed an 8' tall light stand to duplicate the apparent height of my bounced light source, something I obviously didn't have with me. On camera direct flash would have been out of the question.

Incidentally, if you look carefully at the restaurant door, you can see a huge white glare spot. This is the reflection of the light bouncing off the building behind me.
This last photo (Photo #7) was a quick group shot made with the light bouncing off a wall just outside of the frame. Because of the relatively long distance the light travels when bounced, the light is very even from left to right, and provides good modeling and detail in the faces. The shot was made at ISO 3200, a definite "Hail Mary" move, but I got the shot.

It's becoming apparent that the P7700 is not the camera one uses to "push the envelope" under low light conditions. As I had said before, I use it to deal with the contrast extremes that often come with working outdoors in indirect sunlight. Unfortunately, this exercise may have pushed me a little closer to purchasing a camera like the Nikon Coolpix A or the Fuji X100s, cameras wtih APS-sized sensors.

One final note: The selfies I post are seldom much more than lighting sketches. When I'm actually shooting to get a specific look, I'll use the techniques I refined during these exercises as the foundations for a better, more memorable image. I only reasons I shoot myself so frequently are my availability and my willingness to be part of a spontaneous lighting experiment.
Posted by Tom Jung Photography at 12:00 PM No comments: