The Black Foamie Thing is not really a light modifier because the quality of light is totally dependent on the presence of a suitable surface to bounce the light from your flash. The BFT does help to direct light away from areas you don't want lit. Also, it acts as a blinder to minimize light spill onto unsuspecting bystanders when shooting from crowded locations.

For this shot (Photo #1), I simply aimed the speedlight at the ceiling behind me. The light must now travel twice as far as it would if the speedlight was pointing directly at my subjects. This brings the relative distances between my subjects and the background spectators closer to each other, lessening the effects of light falloff. Trust me.


Low Angles: When trying to get "the" photo of an animated subject, I'll often go to a longer lens used at a greater distance. Here, I upped the ISO by a stop to improve the exposure. You can see from the shadows on my subject's arms that the light is coming from camera left, from high above (Photo #2). This long distance bounce flash gives the shooter an opportunity to create a soft but directional light for the photo, as it did here. The speedlight's head was rotated 135 degrees to the left.


For this shot (Photo #3), I rotated the head 135 degrees to camera right. The image follows the "light follows the nose" rule. I believe the bright highlight on my subject's forehead came for an overhead accent light. For shots like this I prefer to use an SB-900 because I have a full 180 degree sweep to both the left and the right.

If memory serves, my back was near a wall which provided some extra light to help the shadow detail (Photo #4).  It's best to have a wall behind you when using this backward bounce technique so you can make use of all the light from your flash.

Hail Mary! Shooting blindly over one's head has been called the "Hail Mary" shot, since photographers resort to this technique only only in times of desperation (sidebar photo). Accompanied by a continuous burst from a motor driven camera, it was the last ditch "spray and pray" attempt to get at least one usable image. It's not a pretty picture.

However, with the advent of Live View, one could actually get a pretty good idea of what was being included (or excluded) from the image frame when doing the HM. If your camera's LCD panel can tilt downward, there would be no reason why your composition couldn't be as tight and level as you would normally achieve from eye level. Very little cropping was required for this shot (Photo #5).

Hail Mary has some advantages. It forces your subject/s to pay attention to what's going on, since the camera is in an unexpected place. The upward tilt of the head lessens any extra chins hanging about. 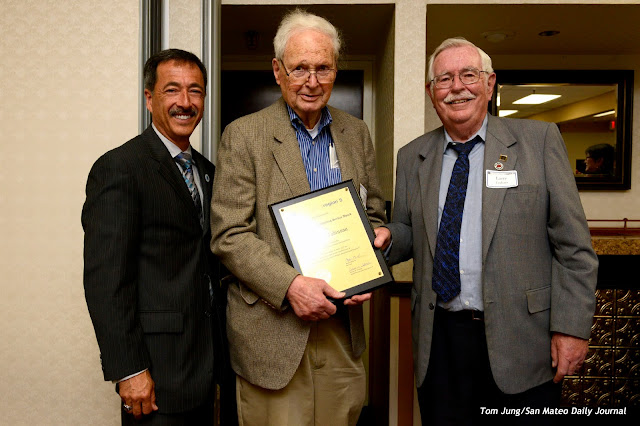 Working Too Close To Your Subject: Occasionally there will be a problem with ceiling bounce. Here, the flash head was too perpendicular, resulting in a sort of light one might find from a skylight. Notice how my left subject's head is fairly level, the middle subject tilted downward, and the right hand subject tilt up. There wasn't quite enough light to properly light the middle subject, but I think the shot is somewhat saved by his almost impish grin.

The Take Away:
If for no other reason, you should keep on in your bag for when a long ceiling bounce is needed.

Normally events like this are centered around the podium. When it does, it gives the photographer a chance to "settle in", adjust exposures, and get the lighting just right. Unfortunately for me, this event featured a roving Master of Ceremonies who would go to the honorees rather than have them come to the podium. I know one of the honorees was having back problems, and by bringing the show directly to her table, it saved at least one person from having to struggle through the crowded banquet hall. It made for a true "run and gun" situation, resulting in some grabbed shots and some exposures that weren't perfectly dialed in.
Posted by Tom Jung Photography at 12:10 PM No comments: Links to this post