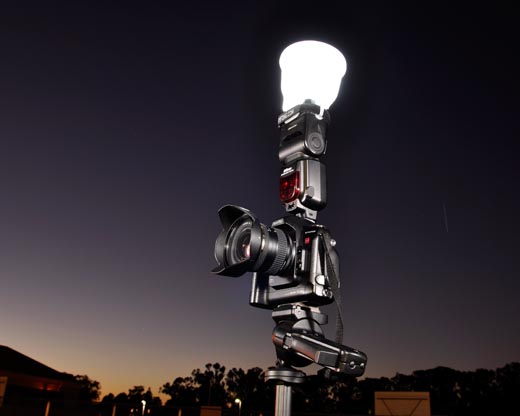 In an earlier posting, I mentioned that I had used an on-camera flash to supplement some weak existing light. In these cases, the on-camera flash served as the main, or key light, meaning it was responsible for creating the shadows on the subject. I must emphasize that on-camera flash is usually not the best way to light a photo. But for those instances where it is the ONLY way to supplement the existing light sources, you should be aware of the shortcomings of mounting a flash so close to the lens axis. Certain light modifiers can help minimize these shortcomings.

Gary Fong’s Lightspheres, often referred to as “tupperware”, are the first add-on modifiers that comes to mind. It was my first on-camera light modifier, and I do not hesitate to recommend it. They are as close to fool-proof as can get. I must admit that Mr. Fong is a great salesman, and the large number of photographers using the Domes is testament to their popularity. In use, the flash head is rotated to the vertical position, raising the mounted dome as high above the lens axis as is possible without a flash bracket. This additional height all but eliminates red eye at most shooting distances. And because the Lightsphere sits high atop the flash body, it won't interfere with the lightsensor should you use the flash in the non-TTL automatic mode.

Now the bad news. The dome scatters the flash output a full 360 degrees on the horizontal, which wastes a lot of light unless you’re in a small room with light colored walls that will bounce the light  back onto the subject. (I know of one photograher who lined the backside of his lightsphere with duct tape in an attempt to redirect the rearward bound light). You’ll need to shoot with relatively high ISOs, which won't degrade your images as much as it once did. The decreased light output makes moderate wide angle lenses with relative open apertures the platform of choice. 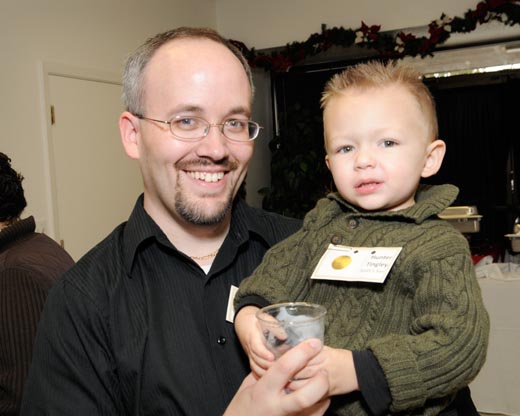 This photo of papa Scott and young Hunter Tingley was done at ISO 400, 1/80 of a second, F 5.6, using a Lightsphere. The lens was set to 24mm, which gave me enough distance to get some great catch lights. Notice that the shadows are softened somewhat by the large relative size of the Lightsphere. Easy peasy. Just point, compose, and shoot. If I had to make the shot again, I'd have upped the ISO to 800 and shot at 1/160 of a second, since there is the tiniest bit of blur.

Considering the aforementioned shortcomings, why not just mount your speedlight on a flash bracket which would raise the flash well above the lens axis? For one thing, the apparent size of the Lightsphere. When viewed from the subject's perspective, the Lightsphere has an effective area of more than three times that of the unadorned flash tube. This distributes the light over a much larger area resulting in highlights that are not so "hot" and smoother midtones. The catchlights are bigger, and the glare from shiny surfaces are not so specular.The saturation of colors is decreased somewhat, but the result is often more pleasing to the eye. Lastly, brackets add one more step to the set-up and take-down process.

Which Lightsphere should you select? There are currently two models, and in my opinion they are both are superior to the original versions which were fitted to specific flash head sizes. The Lightsphere Universal can be attached to almost any flash head up to the Nikon SB-900, which must have the largest head of any current production speedlight. It uses a Velcro cinch strap and a rubber “traction band” to hold it securely in place. The Lightsphere Collapsible  cannot be attached to a head as large as the SB-900 but attaches easily to just about everything else. It is held in place by a series of flanges that hold the flash head securely in place. Think Chinese finger trap. Incidentally, a filter set can be purchased that fits inside of the Collapsible version, but the colors don't seem to match any of the camera's built in white balance presets. If you use the filters, be prepared to take the time to make a custom white balance setting.

June 19, 2015 Update: Gary Fong has introduced a new collapsible Lightsphere top melded to a Lightsphere Universal bottom half. This allows compact storage and the ability to mount on the larger head of the SB-900/SB910. This is the way to go!

If you want to see Gary Fong in action, the following link will bring up a number of his You Tube instructional videos. Certainly, this man is not camera shy! Click here.
In short, the Gary Fong Lightspheres are a good place to start if you plan on photographing indoor events. It is foolproof to install and easy to use, but the light it produces, while not particularly creative, is consistent and reliable. For best results, you should set your camera at a high ISO with a shutter/aperture combination that will yield a one-stop underexposure of the ambient light. I prefer to set the shutter and aperture manually and allow the camera's TTL speedlight metering to take care of the rest. For the record, I usually program the flash to over-expose by 2/3 of a stop. Watch out for off-color ambient light sources. You may wish to filter your flash for a better match.

Yes Virginia, that is a genuine Fuji S2 with a Nikon SB-900 Speedlight sporting a Gary Fong Lightsphere Universal,  1/2 cloud opacity. The photo was made with a Nikon D90, 13 seconds, F8, at an ISO equivalent of 100. The SB-900 on the camera was set to SU-4 mode to act as a simple slave and set to 1/128 power. Some additional facial tissue was stuffed inside the Lightsphere to cut the output even further. A second SB-900 with a  Lumiquest LTP mini-softbox was fired,hand held, 5 times during the extended exposure (twice on the left and right edges, and once along the lens axis). It was quite a hustle using the open flash button while repositioning the hand-held flash for each burst of light.

Posted by Tom Jung Photography at 12:10 AM No comments: