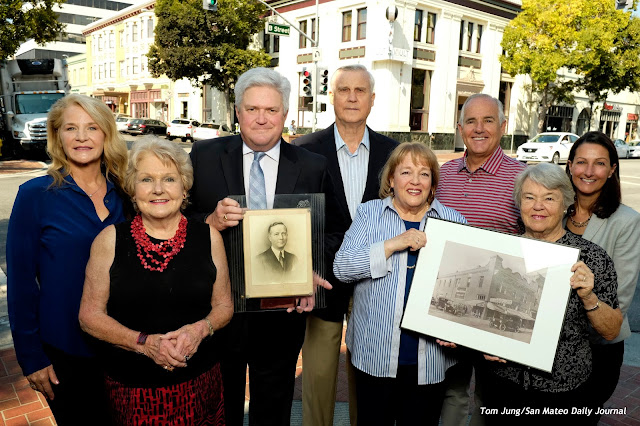 There is one thing that the Fuji X100 series do extremely well - They give the photographer a fighting chance when forced to photograph in broad daylight. Its leaf shutter allows flash synchronization speeds limited only by the physical limitations of the flash. I won't go into the ugly details, but David Hobby gives a great explanation in this earlier post. The Reader's Digest Version? Leaf shutter exposure times may be briefer than the discharge curve of your flash, resulting in clipping, or a reduction of light output at the back end of the pop. Additionally, using a radio flash trigger introduces an additional delay, which may be actually cause the flash to fire just as the shutter blades are closing, reducing the effective output of the flash, or in extreme cases, initiating the light pulse after the blades are nearly closed.

The Particulars: Knowing that I'd be dealing with direct sunlight somewhere in the photo, I brought my Fuji X-100S with my WCL-X100 Wide Angle Conversion Lens already bolted in place. I had my full Nikon kit ready - all 26 pounds of it. For lighting, I used a Lastolite Ezybox and and Adorama Zoom Li-on flash with its dedicated radio trigger. While researching for this post, I discovered that Adorama has apparently updated the Li-On flashes to enable TTL control, and seem to have abandoned the manual adjustable radio remote. I'm not surprised by this sudden change, but it leaves me to conclude that everything is disposable whenever a newer technology can be infused with little or no cost. Granted, TTL control is being adopted to more and bigger flashes, so these manually controlled units will be considered "quaint" in a few more years. But I digress.

Overall, I'm very happy with the results. But well past the point of a re-shoot, I discovered three errors I would have caught if I had used my Hoodman Loupe, as I've recommended for so many years. Before you continue, can you spot them? If not, let us proceed. 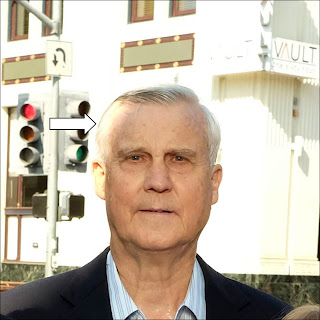 Boo-Boo #1: Subject In Direct Sunlight. During the initial posing, I made sure that everybody was standing completely in the shadow of the building behind me. In this case, my tallest subject wandered back slightly, and as a result, got a blast of direct sunlight on the side of his head.

As I mentioned, quickly "chimping" with the Hoodman Loupe would have revealed this hotspot, which I could have eliminated by having my subject step, or lean, forward. Neither Cissie nor I noticed it, admittedly because we were both so pleased with how well the shoot was going.

Now by all accounts, the 24" x 24" Ezy Box is a little small for the application. There's an old rule of thumb that suggest the ideal light-to-subject distance is equal to the diagonal length of the softbox, which in this case is about 34", or about 3'. My actual sight-to-subject was considerably longer (closer to 7'), giving me a slightly harder shadow than I would have liked. Still, there are nice big catchlights, and the skin around the eyes is well-rendered. 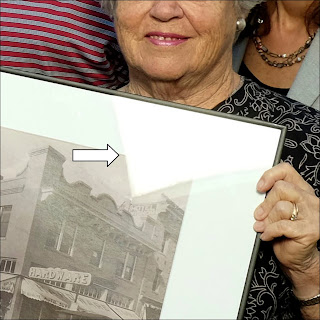 The fix is simple, but obviously forgotten in the moment. By tipping the top edge of the photograph forward, the reflect is re-directed down, in front of the subject, making it invisible to the camera.

Boo-Boo #3: What's With The ISO? Upon returning from a shoot, digital photographers should "zero out" their cameras, which for me means:
Perhaps I was fiddling with the camera between assignments, and forgot to perform this Ritual of the Returning Photographer. On the other hand the shutter/aperture/ISO combination may have been inevitable. Follow me as I reverse engineer the image. If I reduced the ISO to 400;
So far as I can see, the only possible solution would have been some additional flash power. Unfortunately, I know of no easily carried softbox that can handle two speedlights, although there may well be one out there. I wouldn't consider the Westcott Apollo softbox easy to transport, due to it size, but I've used it with two speedlights. However, if I could have reduced the number of subjects and move the light closer, I could have better balanced the flash-lit foreground and the sun-lit background. I could have easily used two speedlights with my DIY dual flash mount and a shoot-through Zumbrella, but I have no idea what my output gain might be. Oh well, it's the subject for another experiment.

To The Good: Finally, something unequivocally positive about the photo. In order to get a better view of the building in the background, I held the camera a foot above eye level, relying on the LCD panel for framing. It was little dark, but the technique gave me the final image at the top of the page. In fact, the top of the camera was actually touching the lower edge of the softbox. This gave a soft, front-on lighting and a flattering, raised chin pose for all of my subjects. Definitely, something to remember when working with mirrorless cameras, or even with Live Preview in my Nikon bodies.

*This switch-up is particularly important for Fuji users, since their batteries are notoriously short-lived. DSLRs give considerably more shots per battery.
Posted by Tom Jung Photography at 12:12 PM No comments: Links to this post