History Lesson: The Norman 200B Flash. This was, and for some still is, the real deal. The unit consisted of a head that features a user replaceable flash tube and a variety of different reflector configurations cabled to a  6-pound pack containing the electronics and the battery. This was definitely not a disposable flash, but one that could be repaired and re-built when the unit goes south. Original versions used NiCad batteries, but today many photographers now use a safer, more reliable sealed-lead acid battery instead. I've used them for photographing large groups of people, or when I need to use a large softbox or umbrella in the field. Its 200 watt-second output coupled with a portable DC power pack allowed photographers to bring studio-quality lighting almost anywhere. Norman is still selling these units, and the last iteration, the 200C, can be seen here.

I must state here and now that these units are durable and reliable. In my opinion, the greatest single drawback is the weight of the batery pack. The weight of thepack can be used in place of a sandbag when mounted with a Norman quick-detachable bracket at the base of the stand. A typical assignment, described here,  was one where I used a 200B in a medium sized softbox held aloft with a paint pole.

A Viable Replacement? As a simple Joe Consumer type, I get my information about new products only when they become available to the general public, and often only when a dealer decides to put the item on sale, as was the case here.

In 2017, a new flash hit the market, the Godox AD200, which is known as the eVolv 200 when purchased under the  house brand Flashpoint from Adorama. I decided I needed to have one, not just for its output, but because it was capable of TTL exposure control over a variety of platforms by simply purchasing a dedicated camera controller. Since I straddle both the Nikon and Fuji works, this adaptability makes a lot of sense, although any unit that sold for as low a price point as this one may prove to be an expense, rather than an investment. The price was moderate, so I took the plunge.

Lightweight Wonder: Did I forget to mention that the complete head, body, and single battery weigh on two pounds?

Twin Heads: Another feature that attracted me was the interchangeable head feature. On the one hand, there was a standard, non-zooming speedlight head capable of a light spread suitable for a 35mm lens. On the other hand, it would accept a bare bulb, just like the Norman and my Amatar converted Vivitar flashes. When used inside a softbox, the bare bulb is a better solution than the narrow beam of a speedlight head, since bare-bulb light goes in every direction and without a pronounced hot spot.

After charging the battery, I decided to play with the bare bulb head, just to see if it would indeed recycle as quickly as advertised. Sure enough, it took less than 2 seconds to go from discharged state to fully charged, and without thinking, proceeded to fire a dozen or so shots in rapid succession. Pleased with the performance, I proceeded to disassemble the unit and return the pieces to the fitted case. 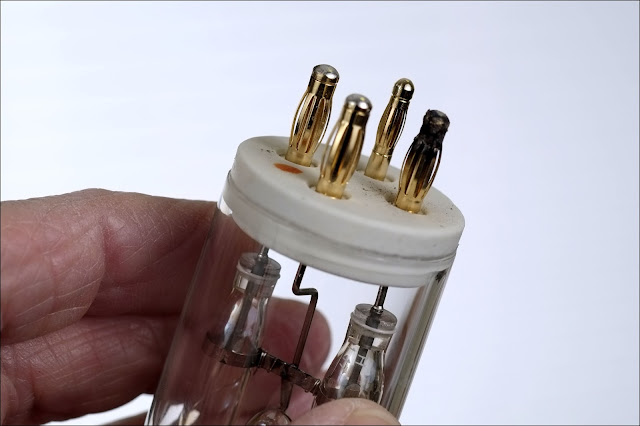 When I removed the flash tube, I noticed a roughness I hadn't experienced when assembling the unit. Closer examination showed that one of the contacts was seriously burned. Now flash overheating is a well-know fact of life, but in a world of speedlights powered by AA batteries, seldom encountered for the simple reason the the little AA batteries usually don't provide enough current to recharge a shoe-mounted flash to full power fast enough cause any damage to the flash itself. Here we had a flash and battery combination that could apparently reach peak output faster than the contacts could properly cool off.

Okay, I learned a serious lesson, and gave some additional thought to how I'll use this flash in the future. Before anything else, I'm going to attach a label on the dedicated flash controller that simply says "Slow Down",  a reminder that the unit needs to have time to cool off between shots. I'm sure this flash will become a suitable backup for one of the two Norman 200B units I routinely use for photographing the Adult School's Graduation Photo I do every year in June. I'll breathe a little easier knowing I have a backup should one of the Norman units get cranky on me.

I know that the catalog photo doesn't give you any idea of how large, or small, the unit is. I'll include some image of the flash "in action" when I have a chance to use it.
Posted by Tom Jung Photography at 12:10 PM No comments: Links to this post