Science of Mixology at the Exploritorium

After 44 years inside the Palace of Fine Arts in San Francisco's Marina district, the Exploratorium moved to Pier 15 on the Embarcadero in San Francisco in April of 2013. I was an occasional visitor to the old location, and never had cause to visit its new digs. Times change, as do the requirement of transit and parking.
I contacted the Media Coordinator, and explained that I had been assigned to make a photograph. I included this line: “Since we are a local newspaper on the San Francisco peninsula, we are looking for (subjects) who live in our service area.” The event was offered to me as a “plum”, as I would be getting two VIP passes and all the delicious goodies that go with it. But I saw it as a chance to take a visit to the new facility off my “long” bucket list.

I spent a lot of time worrying about how I would make a photograph in so large a venue. With the Exploratorium’s architecture inspired by a minimalist “warehouse” school of design, I was faced with a huge open structure with no walls and a high, dark ceiling. Preliminary attempts to bounce flash proved futile, so I ran some test shots first using straight available light (Photo #2) and then with palm-bounced fill (Photo #3, below). While some images were produced, light still failed to reach the distance background, and my subjects simply melted into the darkness. I brought some extra speedlights for possible use as “highlights”, but without an assistant or two, there would be no way to effectively deploy them.


I finally found a large exhibit that was one of the Exploritorium’s permanent displays. I tried to imagine a photo that included the display and the exhibitors in front of it, but the juxtaposition of camera, foreground subjects and the background made impossible to light them all evenly (Photo #4). Again stumped, I abandoned the idea of direct flash. But I noticed I was standing in front of another permanent exhibit that did have a suitable bounce surface. If I were to move my subjects closer to me, my on-camera bounce flash could properly illuminate them. With my foreground lighting now established, I could now deal with the background.


The bounced flash would light my foreground subjects with soft, even lighting, but little light reached the background. To compensate, I increased my exposure time until there was just enough detail to reveal guests milling about in the background (Photo #5). I noticed that there was a ceiling mounted spotlight that could provide enough light to separate my subjects from the background if they were properly positioned in its beam. And if I could include that spotlight in the photo, the dark ceiling would be revealed for what it was, rather than just an underexposed dark region. To my surprise, the solution to the background problem emerged, and I was glad of it. Just then, these two young women walked by. Seeing I had a camera in hand, they automatically assumed I could use their cell phone to make a photo, and so asked. I countered by saying that if they would pose for me, I would instead send them a photo taken with my camera. They agreed, and the resulting test shot showed that my lighting solution would work (Photo #6).

While this was going on, the Media Coordinator and I kept in touch via cell phone. She had her people try to locate any Board members who might show, but none but the Board President himself was in attendance. By 10:00 PM, three hours after I had arrived, I called and told her that it was now or never, and asked that the she bring the Board President to where I wanted to make the photo. It was agreed that I would include her in the shot, since she was the only other Exploritorium staff member at hand. 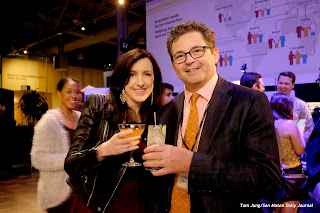 When they arrived, I noticed that neither one had brought a prop I could use to help carry the shot. I asked them to wait while I tried to find the hors d'oeuvre hostess I saw a few minutes before, which of course I couldn’t. Returning, I asked if either of my subjects would object to holding a drink. When neither one minded, I quickly walked up to a small group of guests, introduced myself as a photographer, and begged them to loan me two drinks to use as props for my photo. In exchange, I’d take a group photo and send it to any member who would e-mail me. They agreed, and I now had two yummy looking drinks for my subjects to hold (Photo #1). In two minutes, I had seven variations on the shot. This done, my newfound friends retrieved their drinks and the group photo was made (Photo #7).

I immediately packed up my gear, completely satisfied with the final product. If you look closely at the image I submitted, you can make out the smiling face of my new best friend, the young lady I photographed earlier that evening (Photo #8).
As I left the venue, I recall thinking about the expression on the Media Coordinator’s face, who looked at me as if to say, “I can’t believe you DID that!”.
Come to think of it, neither can I.