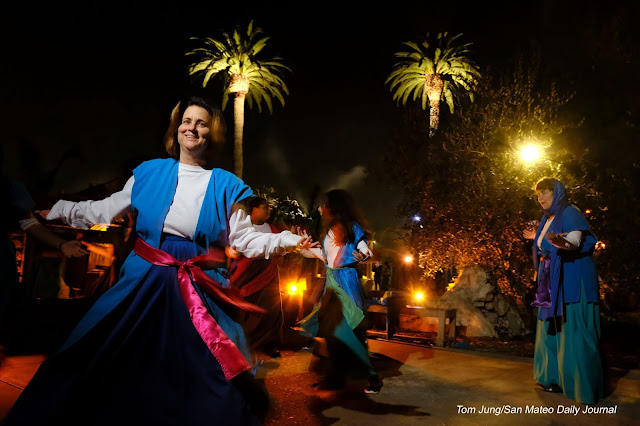 Bethlehem A.D. I've photographed this event since 2013. Since then, I've used the event to experiment with a variety of different lighting techniques. I arranged to make my photos during the dress rehearsal, one day before the actual performance. This allowed me to use flashes mounted on lightstands, something I couldn't do if dozens of visitors were milling around the many attractions. Remote triggering with the R2 series of Adorama flashes helps out too. 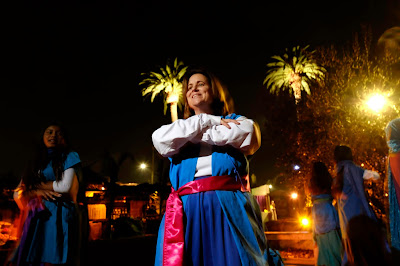 The traditional dance group performed a series of dances typical to the period, and unfortunately for me, they tend to dance in circles while facing inward. I have a great collection of my subject's backs, so I tried to catch the "face out" photos whenever I could get them. For lighting, I used a Godox AD200 with a round head with two grid filters attached. I wanted to keep most of the light in the upper two-thirds of the frame to minimize overexposing the lower half of my subjects. When shooting at the short working distances needed to minimize background clutter, overexposure can be a problem. In this photo, my subject was in perfect alignment with the narrow flash beam, drawing the viewer directly to my subject's face. 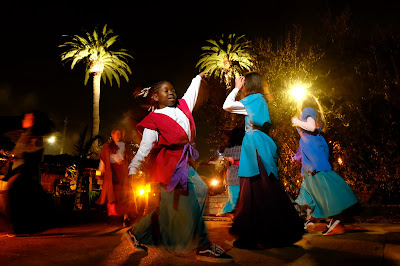 I noticed that whenever I changed my shooting position, the location of my "spot of light" also shifted slightly. In this shot, the zone of illumination was well centered on my foreground dancers. As long as I tried to keep my subject between the two spot-lit palm trees in the background, the lighting and the composition would all fall together. The trick was waiting for the subjects to face the camera (sort of), and because I was dragging shutter (longer than normal exposure times), I hoped that my subjects wouldn't be too blurred. Rear curtain synchronization helped in this regard. But it's tricky trying to anticipate what your subjects will be doing 1/15th of a second after the exposure starts. 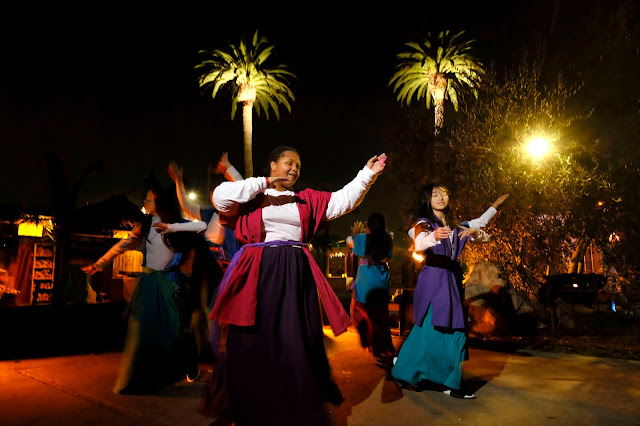 Suggesting Available Light Sources: One trick I learned from Joe McNally: Include the suggestion of a light source in the photo. In this case, the multiple lights in the background suggest that there will be multiple shadows, leading the viewer to conclude that only available light was used. It is presumed that if natural (sunlight) is used, there would be only one shadow, unless your life's orbit centers in Tatooine. Based on both the shadows and the warm background lighting, it's pretty clear that all of the light is artificial, and the multiple shadows expected. 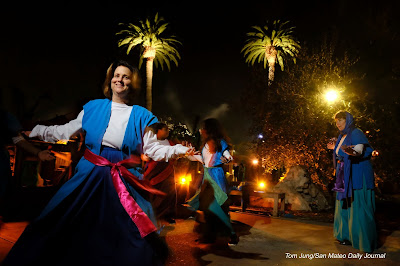 And The Winner Was...: I chose this shot in spite of the empty space between the left and right subjects. The shawl on the right side dancer added something to the historical context I wanted for the photo.

Shooting during the rehearsal gave me a lot of flexibility in lighting and shooting, something I would never have had if I photographed during the actual event. With the dozens of flash exposures I took just to capture this image, I'm glad that if I had to annoy anybody, it would be the performers who had been warned that I was coming. 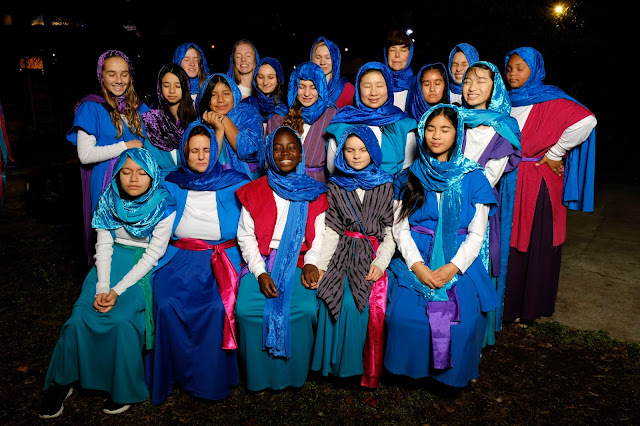 Who Blinked? When the Dance Coordinator asked if I would make a group photo, I was happy to do so, but asked for five minutes to get set up. Since I could more easily control a static subject, I took a little more time refining the lighting. I had a shoot-through umbrella rolled up in my camera bag, so I decided to use it to soften the lighting a bit. And since I was using flash at night, I told them to close their eyes while I made my exposure adjustments. It looks like almost everybody got the message. 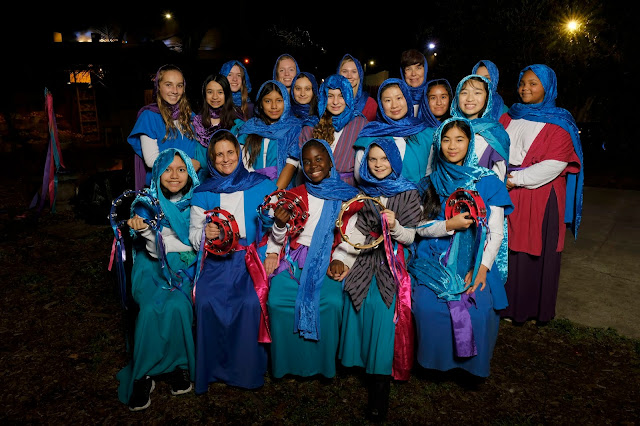 Once the exposure was dialed in, I had the dancers in the front row grab a tambourine so they would have something to do with their hands. It's funny that the shot with the closed eyes is slightly better composed than my final effort.

As the year comes to a close, I offer a season wish for happiness and good fortune for the coming year. As Kinky Friedman said, "May you be blessed by the God of your choice!"
Posted by Tom Jung Photography at 12:10 PM No comments: Links to this post