Get Well Soon! The entire student body of the San Mateo Adult School got together for a "Get Well" photo for the school's Director (Photo #1). Despite the difficulty of directing nearly 300 students, the shot was made with twenty minutes of preparation and about five minutes of actual photography. The difficulty of a group shot of this size increases logarithmically with the number of subjects, and is further complicated by the fact that nearly all were non-native speakers of English. In spite of my best efforts, some people flowed past the edges of the frame, which goes unnoticed, for the part.


Yikes! When I viewed the image (Photo #2), my heart sank. You can see that the flash had fallen in intensity, leaving the more distance subjects in the dark. I had just exceeded the limits of my flash, and now I was stuck.

How could this be? I was using a Norman 800D powerpack with a single flash head had plenty of power, but apparently not enough to reach back to the last rows of well-wishers. Put simply, I was caught by a simple maxim: The greater the distance from the light source to the subject, the less intense the illumination.


Layers To The Rescue: In an effort to brighten up my most distant subjects, I used the Layers command to create two duplicates of my original image. When the layers are created, they will be perfectly aligned, one on top of the other. Each layer can be manipulated individually.On the topmost duplicate, I did the following:

Erasures: One thing to remember: When you erase a portion of a layer, you are not "painting" it. While the region appears white, it is actually transparent which allows the layer image beneath it to show through.

In this composite, you can see that the top layer (most distant subjects) was rendered in color, while the middle and foreground layers had been rendered in black and white.

I follow the same procedure with the middle layer (Photo #4), adjusting the exposure the the next closest line of students. When the top layer is placed above the middle layer, the net effect will be a brightening only in the back rows, while the middle rows show through the erased areas on Photo #3.


Here you can see a simulated layer sequence for the three exposure-adjusted images (Photo #5). Notice that the background layer is above the middle layer, and the two sit atop the base image. Since they are all duplicates from the same image, registration should be perfect. You can see that a "trace" outline is visible on the background and middle ground layers.

Close Enough For Jazz: Careful examination of the background subjects shows a lack of contrast between the highlight and shadow areas. I believe the explanation lies in the relative weakness of the flash illumination when it travels to those faces in the back. In reality, the light hitting the farthest faces isn't that much brighter than the ambient light, so there is less shadow-to-highlight contrast. Boosting the brightness brings the tonal levels closer, but the "snap" seen in the front row is lost. I suspect that all such exposure manipulations will display this tell-tale lack of contrast, but under the circumstances, the overall quality of the final image was much more than I had a right to expect.
Posted by Tom Jung Photography at 12:12 PM

Our Day Of Infamy: A commentator said that except for December 7, 1941, there is no other date that is so deeply burned into the collective American psyche than September 11, 2001. And while we mourn the loss of the thousands who died in the three-pronged attack, it is only right that we also acknowledge the courage of those men and women in uniform who sacrificed their lives, often in vain, in their efforts to bring others to safety.

It should be every photographer's goal to produce an image that does more than acknowledge the visual world. Rather, its goal is to evoke something of the human experience. It should reflect some aspect of our humanity on an intellectual level at the surface, while stimulating an emotional response, and making the subject's feelings our own.

In Photo #1, I felt the NYPD and the FDNY ribbons on the wreath, along with the Honor Guard member in the background would carry a complete message about the event.
Bagpipes and their mournful drone add a solemnity to any memorial event (Photo #2). I felt the shot brought together two visual elements to have some legs: the bunting-theme banner on the drone pipes and the officer saluting in the background.


While speaking with fellow SMDJ photographer Nick Rose, a child in with a red fireman's hat caught my eye. I literally ran over to find him being photographed by his mother with a San Mateo EMT member. He had just presented him with a home-made thank you card (Photo #3), and was rewarded with a chance to sit in  the driver's seat of a fire engine (Photo #4).
Flash To The Rescue: Let me backtrack a bit. As soon as I saw there was a photo to be made, I slipped on one of the three Nikon SB-800s I normally carry in the field. Since I was in the Aperture Priority and Auto FP High-Speed Sync modes, I knew that I would get a  reasonable flash exposure. All of these shots were made quickly and without any additional adjustments. Even though there were no real shadows to fill, the catchlights in the subject's eyes add a little something to the photo (Photo #4). Notice the shadows under my young subjects shoes.

For The Loss: Even though this might have made a passable photo, it is seriously out of focus. The "Hail Mary" hands-over-head approach to photography doesn't always work. For some reason my camera's auto-focus locked onto something in the cab that I can't locate. Maybe I need to remember to check my shooting aperture to insure a greater depth of field, or maybe check my first shot before proceeding to shots two and three.

What I should have done was establish proper focus from where I stood, then lock the distance by holding the AE-L AF-L button down while shooting. This button can be programmed to only lock autofocus, which is the default setting on all my DSLR bodies. I also have the Live Preview opion, if I only remembered to use it. Next time... 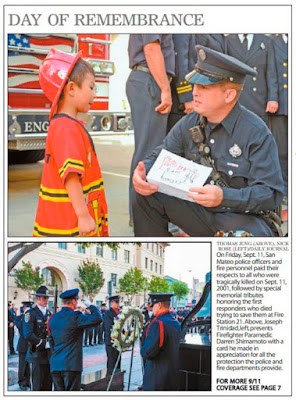 The final layout from Page 1 of the September 12, 2015 edition is shown here. This wasn't an official assignment, just one that I wanted to shoot. I had already submitted several photos from past memorials, and I thought it a challenge to present something new.

I remember a quote attributed to either Alexi Brodovitch, the art director for fashion magazine Harper's Bazaar from 1934 through 1958, or to photographer  Richard Avedon, one of his photographic disciples. To paraphrase the quote, "If you look in your viewfinder and see a photograph you've (taken) before, stop." If I can remember to keep this as my mantra, I'll (hopefully) keep moving forward.

The paper's Editor in Chief diplomatically printed an image from each of our submissions, and it resulted in combining the solemn aspects of the moment with the human interest aspect of a little boy having a chance to talk to a real life hero.

Anything You Say, Chief. Members of the San Mateo Police and Fire Departments, along with their respective Honor Guards, posed in front of a memorial to the city's fallen officers. As some of the other photographers seized the chance at a ready-made photo op, I slipped in to make a shot, just because it was there. I had no intention of submitting it, since I felt I had my shot, and that it would be impractical to get the names of every person in the shot, something that wouldn't be required anyway. Ever the wise guy, I called out, "I'm Tom Jung from the San Mateo Daily Journal, and I'm a personal friend of the Chief". That got their attention, so I made the shot (Photo #5).

As I described in my last post, I once again goofed by mounting a small-sensor (APS format) lens onto a full frame body. If you were to examine the cropped version (Photo #5), you'd seen an image comparable to one made with a 12 megapixel camera, exactly what you would expect when only half the pixels were used in a full-framed, 24 megapixel D600. Once again, I was saved from disaster by a high-resolution body and a dollop of good luck (Photo #6).

Just as I was packing up my gear, the Chief (standing, fifth from the left) came over to shake my hand and thank me for attending the memorial. She also asked if she could get a copy for the department's use, and I was glad to oblige. And for now, I've substituted my 11-16mm APS Tokina with a 15-30 full-framed Sigma.