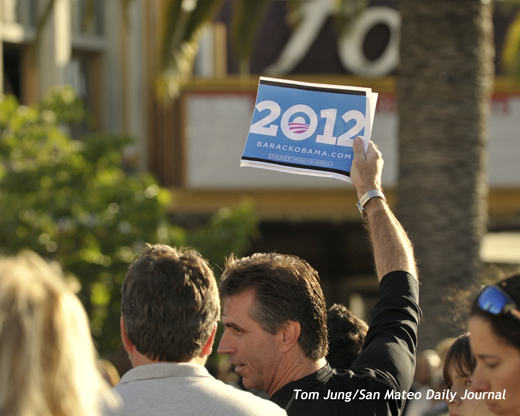 President Obama's Fundraiser in Redwood City showed how things quickly change in politics. My first Presidential assignment at Facebook was in 2011, so overt fundraising would have been gauche at the time. However, now that the race for the presidency is starting to heat up, people are not hesitating to show their dissatisfaction with the administration's efforts to reinforce a social infrastructure that definitely needs our help. There are going to be differences of opinion on how to achieve this, so it came as no surprise that protesters were there with a variety of grievances and agendas.

The initial press release stated that we'd be working  from a riser. This is pretty much standard procedure, and like gravity, you can't fight it. So the distance, combined with low light, would mean high ISO settings and long lenses. And since it was in a theater, it was probably going to be dark. So to be safe, I brought along a 300mm F 4.0 lens, since I didn't know how far we would be placed from the stage. This was in addition to my normal compliment of lenses: a long 70-200 2.8, a mid-range 24-70 2.8 , and a wide lens, this time my older 12-24 F 4.0 Tokina. With these four lenses, I pretty much had it covered. In my bag were 3 SB-800's and a Giotto Monopod in a baton ring on my belt. I decided that if I needed off camera flash, I would thread the base of a Nikon SC-28 flash cable onto the monopod itself. It would be an easy to unscrew the cable and attach the monopod to the base of the 300 lens when the time came. 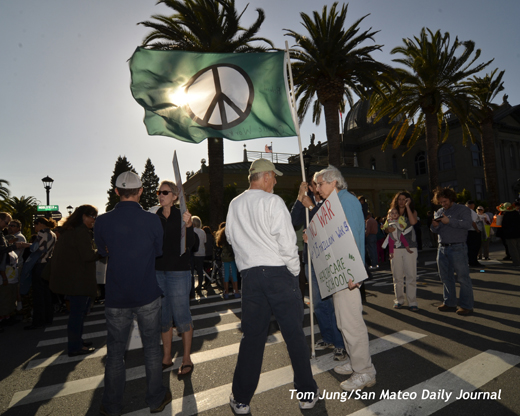 This shot was made at 1/250, F 16, ISO 200, off-camera flash at -2.0 exposure compensation. The flash was held over head on the monopod. This keeps the subject's legs from getting too bright and distracting the viewer's attention away from their faces. This is particularly important when shooting from a low angle, as I did here. I made sure that I aimed the flash directly at the faces so the intensity would be decreased on body and legs. A general rule of thumb: The closer you are and the lower your camera position, the higher your flash needs to be. 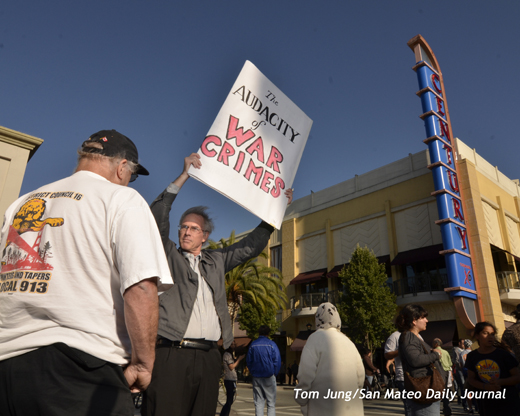 This shot was made with the same settings, but without the flash. Since the sign was held high it did not obstruct place the subject's eyes in the shadow. It's interesting how our attitudes can be shaped by our perceptions. The two gentlemen on the left appear to be confrontational, but actually spoke cordially at great length. I like the image for the inference of dissent, and for having the Century sign in the background. Context, context, context.

I happened to be with two other seasoned Journal photographers, Kore Chan and Bill Silverfarb. Our press releases said to be ready to check in at 7:00 pm, and having learned from my last Obama assignment, I was in line at 6:45. At 7:00 we were taken from station to station, first to get our identification verified, then to the wanding station, and finally to the equipment check. Then were were transferred to a waiting room where we were "locked up" until all of the members of the press had arrived.

At 8:00 pm, we were told that the President had been delayed at his last stop, and that we would move into position at 8:40. We were brought bottled water, a welcomed act of kindness. I will say that the members of the Secret Service, working with local police, were extremely helpful and did their very best to see that we were comfortable and secure. In retrospect, I can see that a certain type of person might consider our treatment overly restrictive, but in the greater scheme of  things, even the slightest breach of security was not an option. But our handlers were very aware of why we were there, and what we had to accomplish. They were also mindful that collectively, we had a "gazillion dollars worth of cameras", and knew that they were, in part, also responsible for the safety of our equipment.

Finally, at about 9:00, we were told to gather up our gear and enter the theater. We were ushered through a series of back rooms into the lobby of the theater, and herded, literally, towards the makeshift riser where we would be standing. Imagine entering a movie theater while the film was still running, stumbling in dark, and having to get your equipment ready to go. Smarter photographers hit the ground running, but I wasn't one of them. After testing both the 300mm and the 70-200mm zoom, I decided to stay with the longer lens, since the background wasn't really worth including in the photo. I mounted the camera on the monopod, made some test shots, and I was ready.

Since I knew I'd need some crowd shots, I decided to set my second camera up with a wide angle lens. I first thought that an available light shot would be possible, but after seeing my initial tests, decided to bounce a flash off the low ceiling (we were positioned just below the balcony). I fashioned a makeshift flag from a piece of cardboard (where was my Black Foamie Thing?) for the flash, mounted it on the camera and set the system aside. I would wait until the next standing ovation, then turn and shoot.

The President entered the room at about 9:45, and the crowd erupted in a standing ovation. My first shots weren't making it. But for that critical moment my attention was on the audience, not the President, and I missed a most wonderful smile when he first stepped to me microphone. However, a photograph from Reuters caught it. Oh well, lesson learned. I turned back to the President. My first shot went downrange at 9:51 pm. 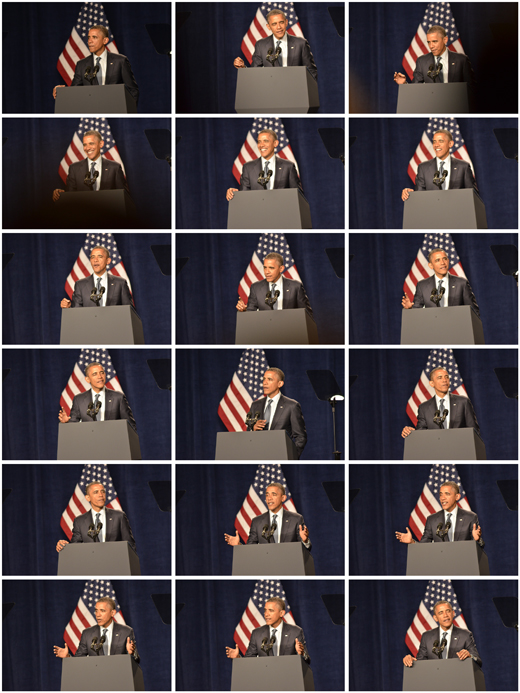 Here are the first 18 photos, taken in a time span of about two minutes. I used to think that I overshot my subjects. But catching the nuanced photo that combines a gesture, an expression, and a context is difficult. When I started this series, I had only one of these three elements: context. Because of my position on the floor beside the riser, I was in perfect position to get the flag behind the President, a shot that could not have been made anywhere else.  This fact did not escape several other photographers, as the fourth frame shows the blurred backs of heads as they rocked back and forth, looking for their perfect shot.

I noticed that the President started to use his right hand to gesture to the side, especially when he was emphasizing a point. I changed my composition slightly to allow for more space on camera left, and waited. This is the image I submitted to the paper. 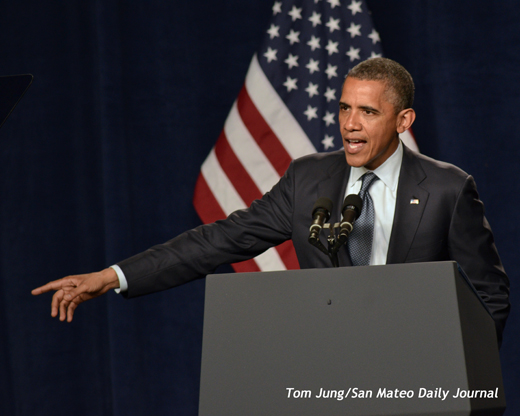 You can see from the composite that this image was not made during the first series of 18 images. In fact, it was the 100th image of a total of 130 made from this location. I would shoot 27 more frames before he made a similar gesture.

When the speech came to an applause point, I turned my second camera towards the audience, hoping for a magic "Obama Moment". What I found was the the 12-24 was having difficulty acquiring focus because of the slower, F 4.0 maximum aperture. I finally resorted to locking focus as best I could, raising the camera above my head, and while pointing and praying, took a shot. I could have used live preview, but under the circumstances, thought it faster to just point and shot. All of the subsequent images would require cropping, and this was the best of the lot. 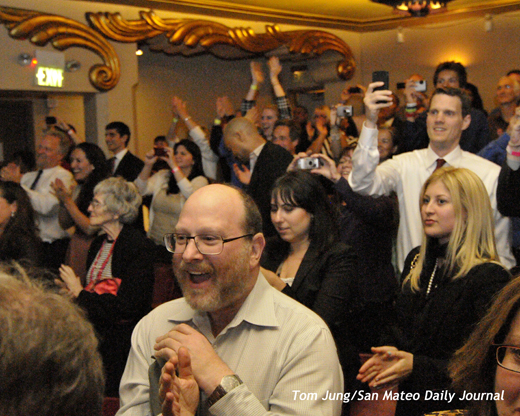 This last shot was taken at ISO 6400 (effective), 12-24 Tokina at F 4.0, daylight balance. I didn't go to the incandescent white balance pre-set because I couldn't get a Full CTO gel on my speedlight while fumbling in the dark. I decided to let the foreground render "properly", and let the background go incandescent "warm". You can see the near subjects appear to be lit from high above, while those further back  have more even lighting on their faces. I made sure to photograph only during the standing ovations, both to capture more spontaneous expressions but also to allow them to listen to the speech without fear of being blasted. I am sure they would have preferred that I just go away, but a shot is a shot, and my editor needed this one. In order to make my deadline, I left when I felt the shot was "in the can". And since Kore and Bill were there, the paper still had coverage. Leaving early was the smartest thing I did. Getting to my car and back to office was a fast and easy.

The images were trasmitted by my 11:00 pm deadline, and would run the following day in the Journal. When I finally got in bed at 2:00 am, I was still excited, and would be for a long time to come. 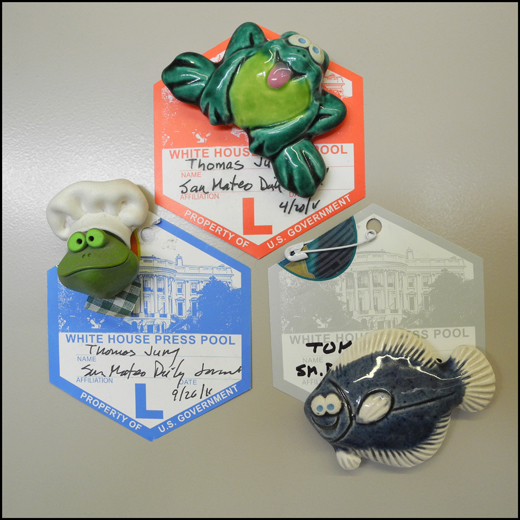 Scratch 3 on my collection of White House Press Passes.