Photo #1 is Dr. Richard Hutchinson, the first African American doctor to practice in the city of San Mateo. At 92, he still maintains office hours, seeing to the needs of the community that he supported for many years. I photographed him at a luncheon where he was the Guest of Honor, and it was wonderful to see how many of his friends and former patients came to pay their respects. He is a gentleman of the first order.

Every now and then I concentrate too much on technique and subsequently lose focus on what the assignment is all about. After giving it some thought, I believe that suitable images should incorporate all of what I will call the 4 C's:
Falling In Love With Technique: I was again using my Fuji cameras and lenses. My new X-T1 was my lead body, and definitely a hot-rod when compared with the X-E1 that accompanied it. Only two lenses were in play today: The 18mm F 2.0 and the 35mm F 1.4. I was carrying a new (manual only)  Flash Point Zoom Li-on flash, intending to "dial in" the proper amount of fill on a "best guess" basis. I was happy that I didn't have to carry an auxiliary battery pack to insure fast recycle times in this high-output flash fill environment, as outdoor shooting under sunny conditions tends to be.


Photo #2: Dorothy Boyajian Teacher Award winner Ashley Gray of the Sequoia Union High School District receives congratulations from Honorary Chairperson Dr. James Hutchinson at the 17th annual celebration of Dr. Martin Luther King, Jr. on Monday, January 18 at the San Mateo Train Station. The award is given to teachers who Inspires their students in the areas of justice, understanding, civic engagement and diversity awareness. The presentation was followed by a ride on the new Celebration Train to activities at the Yerba Buena Center For the Arts and Yerba Buena Gardens in San Francisco.

Simple on-camera flash fill was used for this shot. The highlights are a tad hot, but processed the image straight from the JPG instead of making some exposure adjustments with the RAW file.
Photo #3: Brisbane Mayor Cliff Lentz was among the attendees at the 17th annual celebration of Dr. Martin Luther King, Jr. on Monday, January 18 at the San Mateo Train Station. The event concluded with a ride on the new Celebration Train to activities at the Yerba Buena Center For the Arts and Yerba Buena Gardens in San Francisco.

This shot was done with the flash connected to the camera with a neutered SC-17 cable. Again, some manipulation with the power output of the speedlight to minimized overexposure. The flash itself was mounted on a Canon Chest Pod so I could get my light slightly above my subject's face from my low shooting position. Incidentally, I made more than 20 images, and was sure to thank the Mayor for his cooperation. I should have showed him my press pass before I started shooting. Oh well.


Photo #4: The Pledge of Allegiance was led  by Cub Scouts from Den 12 and Wolf Pack 22  at the 17th annual celebration of Dr. Martin Luther King, Jr. on Monday, January 18 at the San Mateo Train Station. Attendees would later ride the new Celebration Train to activities at the Yerba Buena Center For the Arts and Yerba Buena Gardens in San Francisco.

This was an on-camera fill flash shot made at an extremely low angle. The LCD on the back of the Fuji made it fairly easy to get this ground-level shot.The flash head was angled up slightly to prevent overexposure to the lower half of the frame.

Time To Panic: As soon as the first three images were sent, I got a call from the Editor: "Do you have a shot that shows more of the crowd? We need a lead photo."  Actually, my Spider Sense kicked in, and what I heard was, "These shots suck. Do you have anything, I mean ANYTHING that might show more of the crowd?" 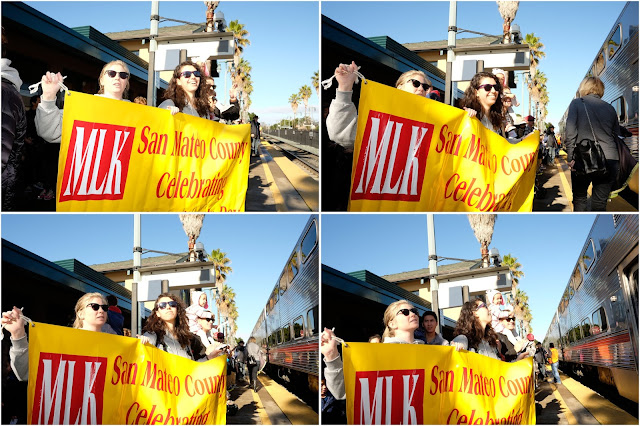 I remembered I made five shots of the bright yellow banner held up by some event volunteers. I initially rejected them because I wasn't pleased with the Calibration (shadows, improperly filled), and the Composition. There was some Content (The big MLK on the banner) and some Context (the train in the background). I looked them over, and chose this last shot (Photo #5) as the best compromise. I held my breath, and sent it.

I didn't hear back from the Editor, so I assumed that it was suitable. 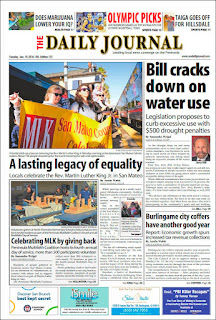 It ran the next day, above the crease, and a full three columns wide. It anchored the accompanying article well, and in retrospect, spoke to the event far better than the earlier three, in spite of my initial reservations about this image.

My singular mistake was forgetting that it is acceptable to use each assignment as a chance to experiment with equipment or techniques under field conditions, as long as I ultimately submit a photograph that meets the important requirements of context, content, composition, and calibration, something I obviously forgot in my excitement. The first three photos met three of the requirements (content, composition, and calibration), but most important for the purpose, context, was completely missed.
Posted by Tom Jung Photography at 12:10 PM No comments: Links to this post 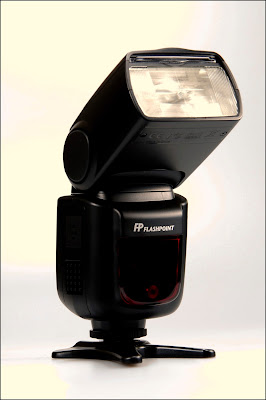 As I mentioned, I purchased two of the new Adorama Li-On speedlights: One fully manual and one Nikon iTTL compatible. The reasons were simple: My dedicated Fuji flash is so slow to recycle that one might as well shoot in the manual mode, and I was curious about the benefits of a rechargeable Lithium Ion battery technology. For whatever reason, Adorama was discounting the units, so I purchased the pair for less than $300.00. One additional incentive was a free controller kit with the supposed ability to control the manual unit from a distance of 150 feet, with full manual output control from the camera. Wow.

When they arrived, I found out that the radio controller kit (transmitter and receiver) was back ordered, so my comments will be confined to the Li-on battery’s practicality and observations on the flashes when used in the manual mode.

The Battery: When the two flashes arrived, I immediately charged their two batteries. The battery chargers featured an LCD gauge so that one could monitor the charging progress. Once charged, I loaded the iTTL version and installed it on a Nikon P7000, a point-and-shoot camera with a hot shoe and a built-in intervalometer. I set the camera to make an exposure every 30 seconds, started it, and left for lunch. When I finally got around to checking it, the camera and flash had been snapping away for nearly three hours and produced more than 340 uniformly exposed images. The recycle time was still under 2 seconds, right about where it was when I started.

The Case: The nylon case, while outwardly well made, lacks a belt loop. Also, when the provided flash stand is stored in its inside pocket, it’s a tight squeeze getting the flash back inside.

Head Rotation: The flash head can rotate 180 degrees to both the left and the right, a welcomed feature for a shoe-mounted flash used in the bounce mode. But unlike the Nikons which use a push-button lock to prevent accidental head rotation and elevation, the Adorama units eschew the locks and relies instead on some very stiff detents.

Synchronization Port: Secondary synchronization is provided by a port that accepts a 2.5mm microphone jack. This is fine, but my Midwest Photo Universal Hot Shoe Translators use a 3.5 mm cable. Again, an odd miscalculation by some engineers who hadn’t considered that Midwest Photo, one of the first (perhaps THE first) to utilize the microphone jack interface in an off-the-shelf speedlight, had already adopted the larger diameter as their standard.

Power Saving Options: The flash has a power cut-off that could help to prevent draining the battery when the flash is on and not in use. This could be useful, considering the relative difficulty of finding a fully-charged spare battery if you should run dry while on assignment and didn't have a spare. However, when you wait around as long I do, waiting for something picturesque to occur, you could be unpleasantly surprised when the flash fails to “wake up” at a critical moment.

Focus Assist: The Adorama unit can throw a red laser criss-cross pattern to help the camera’s auto focus sensors find something to lock on.

Flash Foot: The unit uses a simple rotating thumb wheel accompanied by a retracting retaining pin.
The Price Point: Let's compare performance to price. At the left, my Youngnao 560 and a battery pack, which would be necessary to bring this combination closer in performance to the Adorama. Based on random Amazon.com prices:


Now if we compare the sale and "suggested retail price of the Adorama manual unit, we get:

My Final Thoughts: I am fully behind the new battery technology. It gives me incredibly fast recycle times and easy output adjustment. I can see myself using the Adorama unit on indoor assignments where bounce flash is the preferred lighting solution, and especially when flash automation isn't that much of an advantage.

Remote Mode:  Like all flashes that rely on photo-optical remote triggering, you open yourself up to interference by other photographers using some sort of flash on their real cameras. You flash will switch allegiance, and become their slave, not yours.

*I am also aware that my price point discussion did NOT include the cost of the 12 AA batteries it would take to charge up the Youngnao combo package as described. Even with cheap generic batteries, you're looking at an additional expense of $3.00 each time you exhaust a full set. Not a deal breaker.
Posted by Tom Jung Photography at 12:10 PM No comments: Links to this post