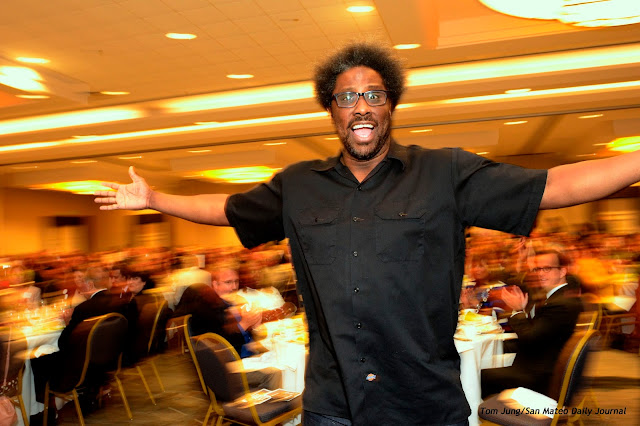 Pay Attention! Sometimes, no matter how hard one tries, the Stars In Their Courses will work against you. This shot, had it been properly framed, would have been a worthy effort.

W.Kamau Bell, a local author and stand-up comic, was the guest speaker at a fund raising event. In the past, I arranged to attend the pre-event book-signing party so I could have a few minutes to introduce myself to the subject, and suggest some possible approaches to the photo. I told him that after I made the expected "picket fence" photo with the event sponsors, I want to make a shot of him, coming towards the stage, with the audience applauding in the background. Surely, my 17-35mm Nikkor at its widest setting would give me enough coverage, and I had a convenient grey wall behind me to bounce my shoe-mounted speedlight. By adjusting the camera to a moderately small aperture and a moderately long exposure, I hoped I could get a frenetic, blurred audience and a sharply rendered comedian getting ready to take the stage.

When the moment came, Mr. Bell stood up and literally leaped towards me and the stage. When I brought the camera to my eye, it was apparent that his left hand was not in the frame. Without enough coverage, the concept of the shot was lost, so I grabbed this shot, just to have a record of my newest misstep.

Crop Factor: Here's the problem - a 17mm lens would have be fine on a full framed body. But mounted on a body with an APS sensor, I get an angle of acceptance equivalent to a lens with a focal length of about 25mm, which was obviously not enough to get the job done. That's exactly what happened, and I have nobody to blame but myself. 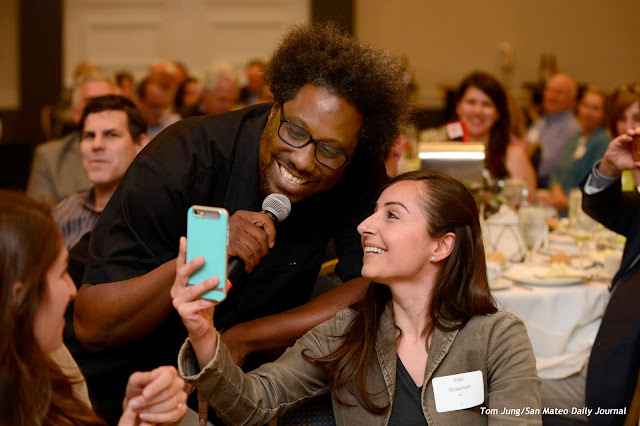 Another Opportunity: As it turned out, Mr. Bell took a few minutes to work the crowd, so I changed lenses and gave chase. After adjusting the speedlight for more effective ceiling bouncing, I made several shots of this young woman showing off her new selfie. This was a nice enough shot, but considering the "one that got away", not something I could brag about. 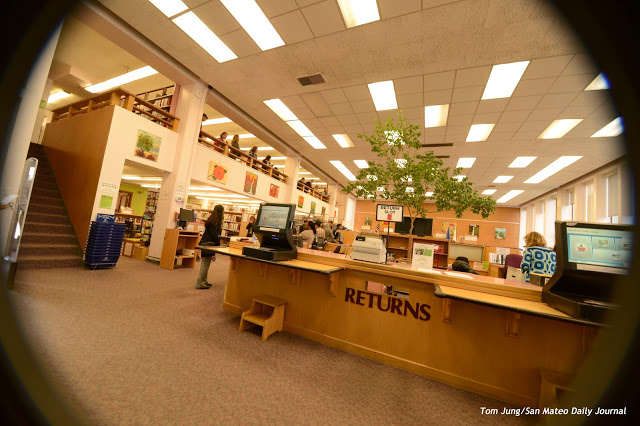 Corollary Misstep: A while back, I did the exact opposite: I mounted an APS formatted wide angle lens on a full-framed body. The result was this pseudo fisheye shot that isn't distorted at all, just round. Right after I made this shot, the problem was obvious, a matching the lenses to their appropriate bodies fixed everything. Again, APS lens on full frame body. The problem is obvious. However, the photo would still be usable, once the curved areas in the corners were cropped out, and you have enough pixels to render a good image.
Posted by Tom Jung Photography at 12:10 PM No comments: Links to this post

My "Justin Case" - Just In Case 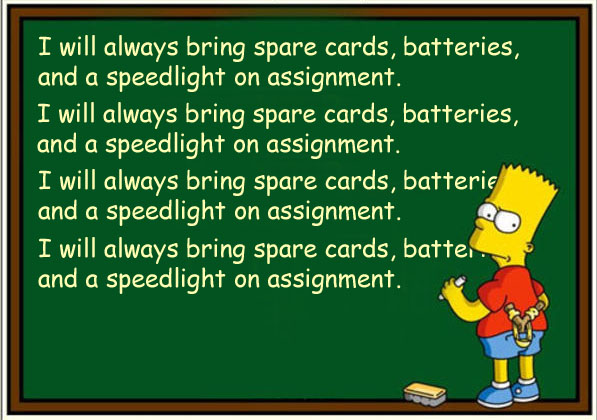 The first two weeks in June presented me with a major revelation: I carry too much equipment in my main bag, and not enough on my person. I am a strong subscriber to the adage "It's better to have it and not need it, than need it and not have it". Sure, I usually have three speedlights at the ready, but they are useless to me if they are in my camera bag beside my assistant on the other side of the venue. And it isn't just speedlights. I actually started photographing with an empty (no SD card inside) camera, not realizing my mistake until I started to review my morning's take. Luckily, I was able to duplicate most of the shots I lost, but some priceless expressions, along with a potential Pulitzer Prize Winner, were lost forever. Just kidding about the Pulitzer. And since I started using Fuji mirrorless cameras on assignment, I've been caught with dead or dying batteries on several occasions.

The Mission: My mission was to see how many essentials I could cram into a Think Tank Speed Changer 200 pack. After some thought, my list of must carries grew longer and longer, but so far, I've included the following: 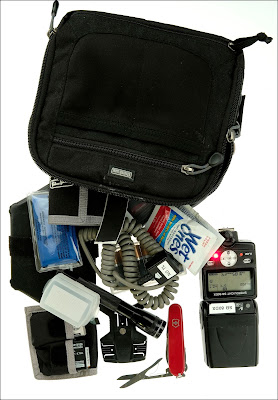 In the outer compartment, you'll find:
Among the various and sundry items you'll find:
Irving Penn: The photo "Theatre Accident" has always been one of my favorite still life photos. It incorporates a feeling of how a handbag's contents might spill at the feet of an opera (or ballet) patron's feet. My photo is a humble homage to the photo. All that's missing is the patent leather pump.

Fully packed, this bag weighs about thee pounds and is difficult to attach to a dress belt. My next problem is how to simplify attaching the bundle without the appearance of a struggle. I may wind up attaching the bag to a wide, load bearing web belt, thus converting my original concept of a quick backup bag into a superhero's utility belt. In time, I may trim back on the bag's contents, but in the mean time, I'll have more than enough great stuff securely attached to my waist.