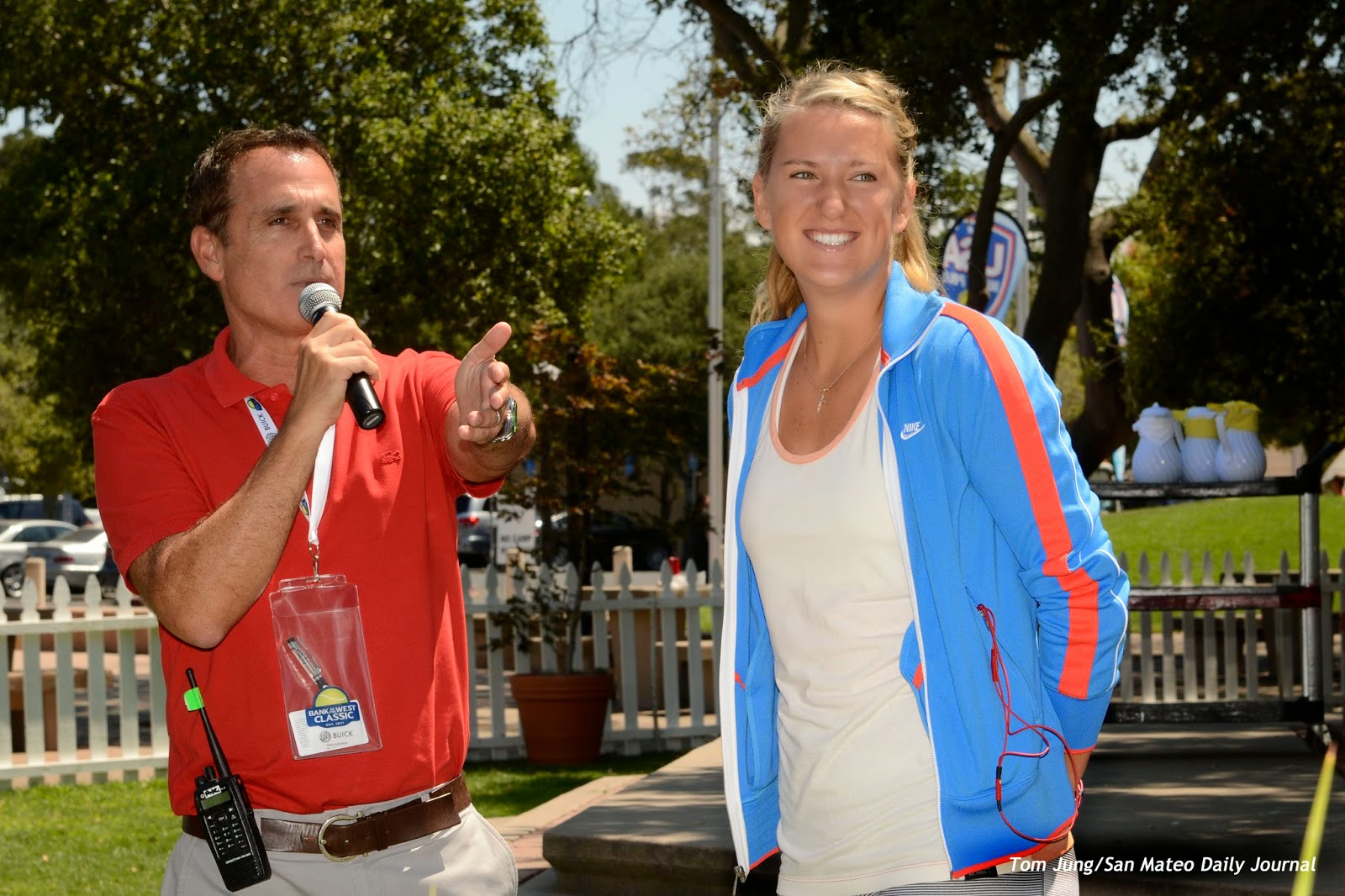 Be Wary Of Greeks Bearing Gifts. The press release read, "12:30 pm: Photo Op". Well, isn't that special? Some quality time with my subject, and opportunity of create this year's submission for the Pulitzer prize. Just kidding. The notation was a little misleading, but I created this post for two reasons: First, if you ever have an opportunity to shoot an event's "Photo Op", be wary. Second, sometimes you may be ready to make the beautifully lit photography, but fate just snatches away the opportunity, and laughs.

The event was a major, women's tennis tournament, the first in a series of must-attend matches that culminates in the U.S. Open. Had I checked the web page in advance, I would have realized that this event would feature some of the heavy hitters in women's tennis, and former winners of the event read like a who's who of the women's tennis.

I normally don't name drop on my postings, but the gentleman on the left is media personality and Tennis Channel host Andrew Krasny, shown here introducing 2012 World Tennis Champion Victoria Azarenka. I had arrived a bit later than I had planned (It's easy to get lost at Stanford), only 15 minutes before the Photo Op was scheduled. I took this sketch shot from the side, partly because there wasn't a better background, and also because I'd be blocking somebody's view if I moved to the other side. It's probably a good thing that I stayed put and out of everyone's way. Also, I prefer to work from the subject's left side since it decreases the possibility of the right arm crossing over the face, assuming your subject is right handed. It didn't work here, because Mr. Krasny chose to hold the microphone with his right, while gesturing with his free left arm. But lighting was the real issue, and as you can see (Photo #1) shot, there would be be no detail in the shadows if I selected an exposure that won't blow out the highlights. Obviously, I need some help in the lighting department.

Because the quarters were so tight I left my monopod on the sidelines, figuring that I would just use the speedlight as a convenient fill light. I quickly mounted a Nikon SB-800 speedlight in my camera's hot shoe, and you can see the immediate up-tick it made in shadow detail. Besides, waving it around would just call attention to myself, a potential distraction with both real and imagined consequences. Anyway, the photo would reproduce quite well, as the colors were vibrant and true. Definitely not a shot one should be particularly proud of, but I now had a shot "in the can", and while it was technically satisfactory, it was a little weak in context. Besides, the "Photo Op" was schedule to occur in just a few minutes, so all I had to do was wait.

Then the announcer started to get the audience ready for their "photo op". One full table would come up and be photographed with Ms. Azarenka as a group. Then the image would be posted to the event's website and made available for downloading by any of the guests. In a strange way, it made perfect sense, as dozens of fans could be processed in a very short period of time (Photo #3). But from my point of view, it was a photographic disaster, as eager fans, like flotsam, seemed to wash over Ms. Azarenka, hold their positions for just a moment, and like a receding tide, drift off the stage. Two technical notes on the photo: First, for some reason the camera went to Aperture Priority, resulting in my subject's being a bit over-exposed. Why this happened, I don't know. Certainly I don't remember changing the settings. Second, the image wasn't going to be submitted, since I wasn't going to chase after 11 die-hard tennis fans and get everyone's name. I just pointed the camera, made the shot, and sighed.


Finally, I got a break. I noticed that whenever a new group approached the stage, there would always be that one fan who stepped forward for a handshake and a word just before the photo was taken. I decided to simply wait until each group came forward and try to get the shot of that determined fan trying to get some face time with Ms. Azaraenka. In this case, it worked (Photo #4) . Looking back, I might have called for them to look towards me, but had I done so, I probably would have had many more fans to deal with, and that many more names to chase after. This shot, my first choice, was submitted, and I suspect came close enough to what my editor probably had in mind. At least she didn't immediately respond, "Do you have any others?", a sure sign I had really missed the mark.

So next time the release announces a "Photo Op", I have to remind myself that it may be a photo op for the guests. After all, it's not always about me.

Post Script: Photo #2 ran in the August 1 edition of the paper.