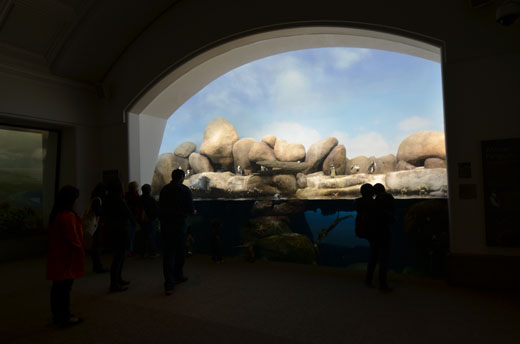 Penguins, Penguins, Everywhere! I was photographing a new exhibit in the Tusher African  Hall at the Academy of Science in San Francisco's Golden Gate Park . When I was 10 years old I spent nearly every Sunday afternoon roaming the great halls of the Academy, fascinated by the realistic dioramas depicting life in the African wilds. Times change, and fifty years and a major renovation later, the largest of dioramas, formerly a depiction of a pride of lions, has been changed to a habitat for penguins.

The sketch shot at the top of this post was used to determine a suitable exposure for the "dry land" portion of the exhibit. The realistic "sky scape" was painted on the background and illuminated with natural light from a skylight. This was lucky for me, since it decreased the brightness level I would have to overcome with flash. 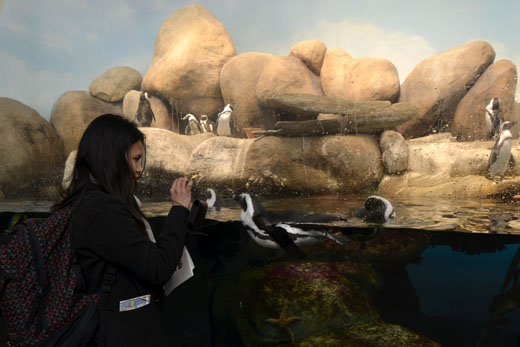 I was able to bounce a shoe-mounted flash off the wall at camera right for this first shot. I felt that I was off to a good start. I decided to leave iTTL and go to Manual control of the flash. I did some adjustments using different aperture/shutter speed pairings. I settled on 1/160, 5.6, ISO 400 for this shot. 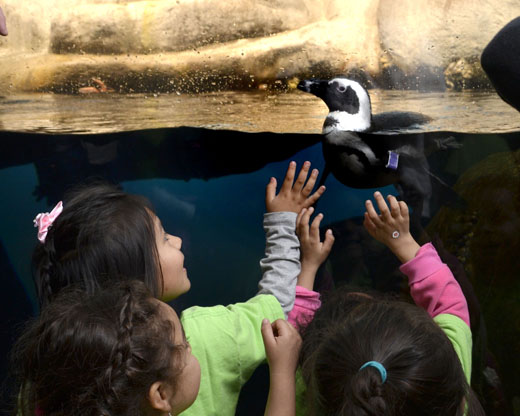 I moved about, waiting for the right combination of subjects and background. In this shot, there's a bit of glare off the glass behind the penguin's head. Also, the underwater portion is seriously underexposed. I decided that I'd put a second flash on the floor, point it into the dark waters, and see what happened. Since I was using the flash in manual mode, I shift the second flash to fire using the SB-800's built in SU-4 sensor. 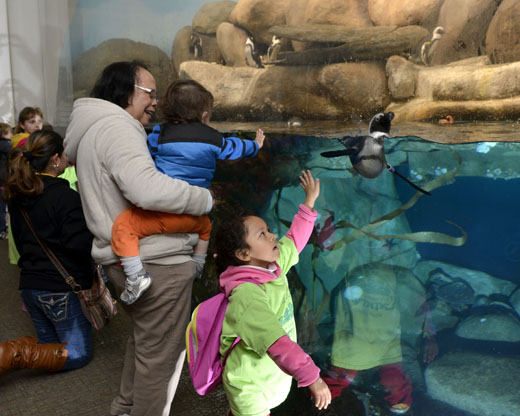 Wow! All of a sudden, details emerged from beneath the surface. The rocks were now clearly visible. But congratulations were a little premature, as closer examination showed some major light spill from the front of the flash that resulted in a hot spot on this young lady's tee shirt. The additional light also caused some interesting reflections on the glass. The effect was distracting and would not reproduce well, but it could be an appropriate technique in a future photo. 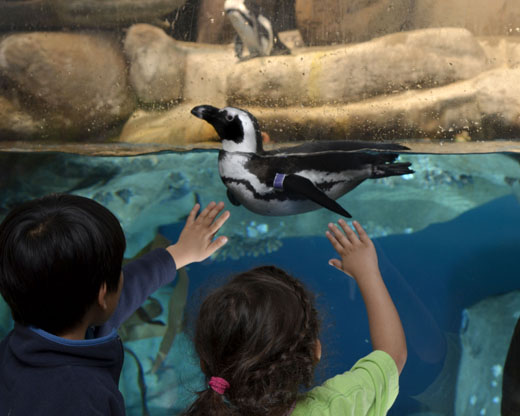 This final image was made after I changed my shooting position to minimize the reflections. First, I made sure that the "film plane" of the camera was parallel to the glass. This way the reflections would be behind my subjects and therefore out of sight. I also moved the second flash as close to the window as Ipossible to minimize light spill. Some "glow" can still be seen on the the boy's thumb, but for the most part, the spill is under control. The key light came from high above, so there's no glare from the face of the glass itself.

I have to admit that this experimentation was a lot of fun. What I liked most is that I feel like I'm getting closer to a "sweet spot" in my lighting technique. I still have a long way to go, but now a can look back and see where I've been.

Reminder: I asked in advance about using flash in the exhibit. It was given permission provided I didn't flash the Jackson's Horned Chameleon who now lived were a Dik Dik was once displayed. The "No Flash" warning was clearly posted beside the lizard's habitat.
Posted by Tom Jung Photography at 12:10 PM No comments: