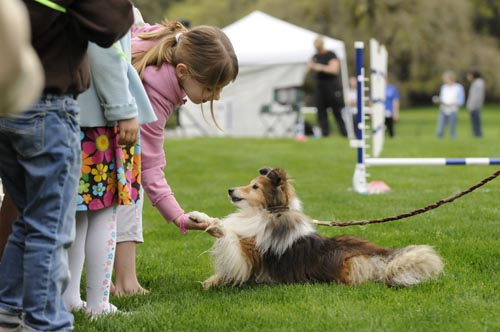 Incoming! I was on assignment at Filoli, an historic site of the National Trust for Historic Preservation and one of the finest remaining country estates of the early 20th century. A number of family-friendly events are scheduled throughout the day. One popular event was a demonstration of by the  Fortis Agility Sports Training Group. Members train their dogs to run an obstacle course involving leaps, slaloms, and climbing.

I positioned myself to photograph dogs leaping over a high-jump bar that was adjusted to the dog's height. The day was overcast and my white balance was set according. The ISO was set high enough (ISO 800) in insure a short shutter speed to minimize the effects of subject motion. I made some sample shots in Aperture Priority and was satisfied with the results, the camera choosing an exposure setting of 1/2500 at F4.

Focusing was going to be a problem. While I was using a 2.8 fixed aperture lens, I was not confident that the autofocus could keep up with these fast-moving pooches, especially when they were essentially traveling straight towards me. I decided to adopt a trick that I read about in article about Alfred Eisenstadt, one of the best known Life Magazine photographers. Armed with a fully manual Leica rangefinder camera, the state of the art 35mm camera at time, he set about photographing the ice-skating barman delivering drinks at an alpine resort. Eisenstadt solved this by first focusing on a stationary object (which in this case was a chair) which established a plane of sharpest focus. Anything that was photographed beside the chair would also be  rendered in proper focus. Next, Eisenstadt had the barman skate past the chair and made his exposure when the he passed through that plane of sharpest focus.

I felt the conditions were nearly identical to the ones Eisenstadt faced so many years ago, so I decided to pre-focus on where the dog would be at the peak of his jump. But how do you focus on air? I solved this by focusing on a fixed point, namely the actual hurdle, and locked the focus in. Next, I leaned back about one-half the length of the jumping dog. I hoped this would place the tip of the dog's nose in the plane of maximum sharpness at the height of the jump, the moment when half of his body was in front of the hurdle and one half was behind. 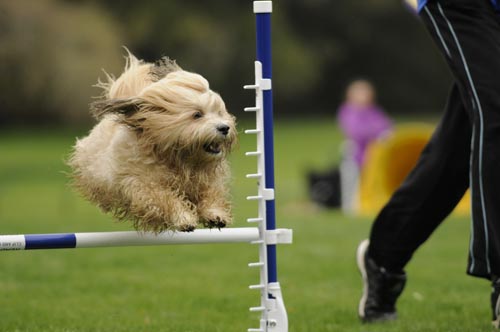 Based on this early test shot, the technique seemed to work. The lean was about 8 inches, since the dog was small. The owner's legs were distracting, but the dog was where I wanted him.

My next shot was composed to emphasize the dog's leap. I tightened the crop to isolate the dog. Since the dog was larger, I leaned back a bit further, about eighteen inches. Here's the result. 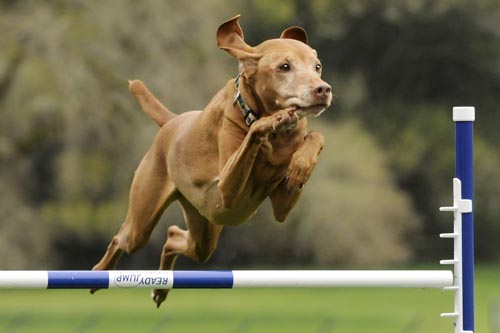 After I finished congratulating myself on solving the problem, I realized that this photo really didn't have "legs" so far as the paper was concerned. It was a great photo of a dog, but even with a caption, it's a photo without a context. It needed some visual clues, something to link it to an interesting activity.

Using the same technique but a different dog I zoomed out for a different composition and shot until I made a photograph that included the owner giving the dog prompts on what he should do next. 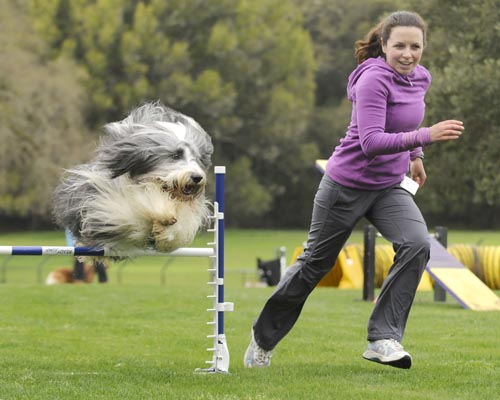 This was the accepted image. While the young woman is recognizable, it's the dog that's the newsmaker, and he is clearly in focus. Fortunately for me, some of the other obstacles can be seen in the background and are easily recognized, adding to the context of the photo.
﻿
﻿I will write more about context (the successful background) in another post.
Posted by Tom Jung Photography at 12:10 AM 1 comment: