First Some Flash Fundamental: When shooting outdoors, you should remember that flash can be used either as key light, or fill light.
Lighting: Even though this shot could have been made with ambient light, I prefer the saturation that a flash provides. Flash provides the shadows, since those provided by the flat ambient lighting would be much less pronounced. A single flash, mounted on a 8' tall lightstand, gave me the off lens axis distance to give these eight faces three visible dimensions.

Staged or Candid? One must remember that when photographing any First Responders, your photo shoot could end abruptly should a local crisis arise. Therefore, you really can't count on getting your subjects too far off track should an emergency come up. The good folks at the station told me they'd roll a more "photogenic" engine into the back lot, which they did. Since the sky was overcast and I had plenty of flash power available, I had them park it so that it could be easily deployed if necessary. After that, it was a simple matter to move the food barrels, open the doors, hand out the foodstuffs, and ask for a smile. Shooting done in just a few minutes. I purposely chose to shoot from a slightly lower perspective so that the emptiness of the barrels wouldn't be obvious. 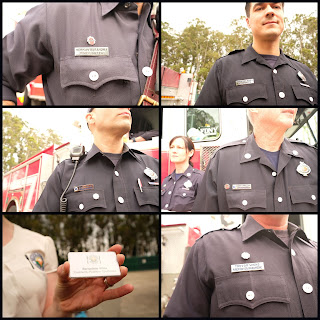 Identifying Subjects: Normally, I would simply photograph my subjects Identification Cards/Badges for my caption and not give it a second thought. However, when photographing subjects in uniform, be sure to include their faces, since the color of their utility uniform was exactly the same. I ultimately figured out who was who, but just to be safe, requested confirmation from the event publicist.

If your a head counter, you'll notice that my composite only shows six heads. I did this just to make the point, as I had business cards for the missing two.

Per the Journal's policy on the pre-release of any photos taken under their auspices, I normally create a variation of the final image, with the words Not For Publication prominently printed across the face. Certainly not as subtle as a watermark! 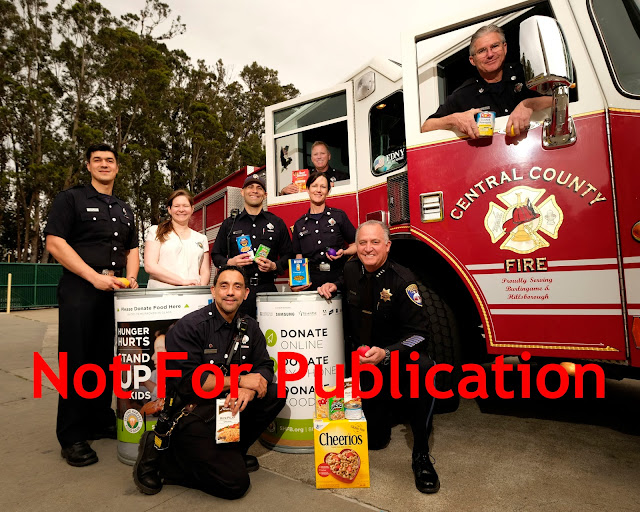 Was Flash Necessary? Sometimes I ask myself that very question as I am always reminded of the old saying, "When you're a hammer, everything looks like a nail". I believe that without a flash on an overcast day, the faces lose all sense of contour. Here, the flash qualifies as a Key Light, as it creates is own shadow, as you can see how clearly defined everybody's chin line is. And while it can produce those distracting "hot spots", like the one on the open fire truck door, the "snap" of a properly exposed specular highlight produces a more true-to-life rendering, similar to what we might see under direct sunlight.

And nobody's squinting!
Posted by Tom Jung Photography at 12:10 PM No comments: Links to this post