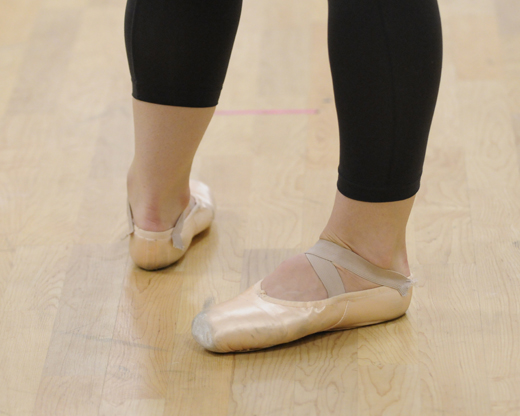 I admit to having mixed feelings about dance. While dance is all about movement, it is the moment, frozen in time, that fascinates me. Given my choice of watching the dance itself or viewing photographs of specific moments of time, I prefer the photos.

In July of 2011, I was photographing dancers of the Peninsula Ballet Theatre as they prepared for a fund-raising gala later that week. I really wasn't sure about how to approach this assignment since I had never photographed ballet before, and certainly never on the dance floor with the dancers themselves. Before I started, I immediately introduced myself, making sure they understood that I was making a photograph to publicize the upcoming fundraiser. I told them that I would get their names afterwards so they could concentrate on the dancing. I also told them I'd keep my distance, and that I wouldn't be using flash.

On open assignments like this one, I am usually free to bring back any image I wish, within reason. But to clarify my approach, I try to anticipate what I am about to see, and how the readers will interpret the image.  In this case, the studio was lined with mirrors, so reflections might create an interesting visual element.  Since dance is about motion, it would be better to attempt a photo taken at that moment when movement momentarily ceases, sometimes called the "moment of peak action".  Finally, the dance must look effortless, an illusion created by the studied combination of physical strength and fluid movement. No matter what the approach, my ultimate goal was to capture the viewer's attention so they might actually read the caption, and hopefully attend the performance. 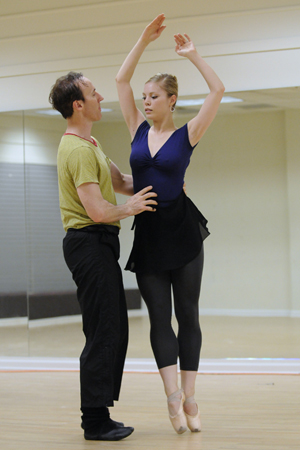 I try to avoid submitting photos in a portrait (vertical) orientation. Most of my photos are only accompanied by a brief caption. The caption, when positioned below the photo, makes for several lines of short, chopped up text. If the caption appears to the side, it would have the same problem, along with the possibility of a great deal of empty white space if the caption is brief. As you can see, the uneven gaps between words can be quite distracting. Incidentally, short lines don't flow as well, and may discourage anyone from actual reading the caption. 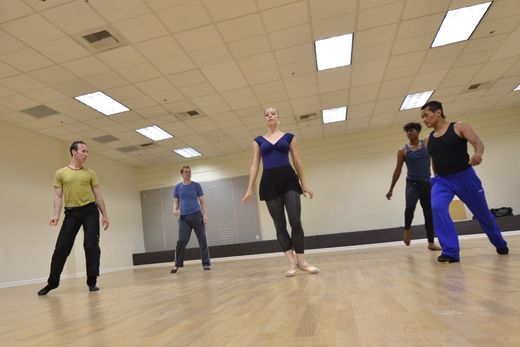 I attempted to show the entire group in the practice studio. While the slight "dutching" (tilting) of the image added to a sense of motion, the dancers would be too small to show any detail, possibly shifting the viewer's attention to the pattern in the ceiling and away from the dancers. This shot was not submitted. 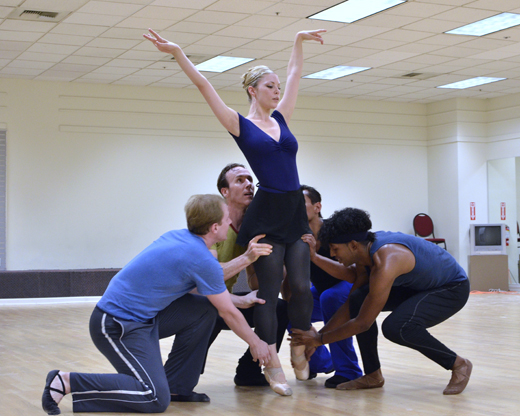 I moved closer for this next photo. The dancers now occupy much more of the frame. But only one male dancer is looking up, so the shot was rejected. 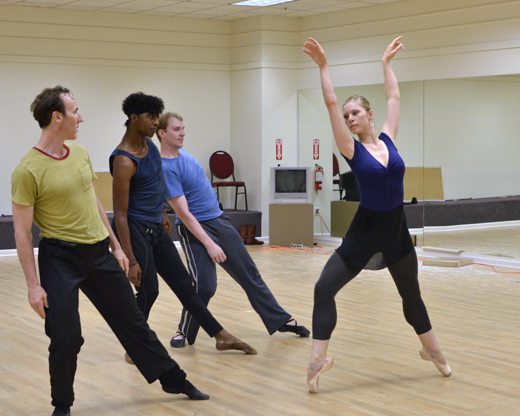 The next shot had some potential, since everybody's face was clearly visible, and the primary lines of the dancers combine to form a "V", giving the viewer the impression of motion. But the computer monitor, situated in the center of the photo, ruined it for me. 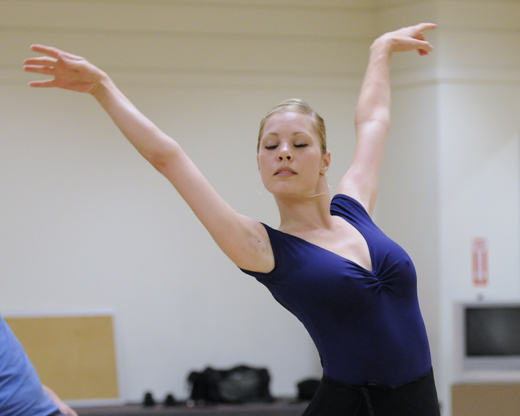 I made some photos with a longer lens, which provided some background separation. However, this particular photo lacks any contextual clues as to who the woman is or what she's actually doing. In a word, there's not enough helpful background detail. 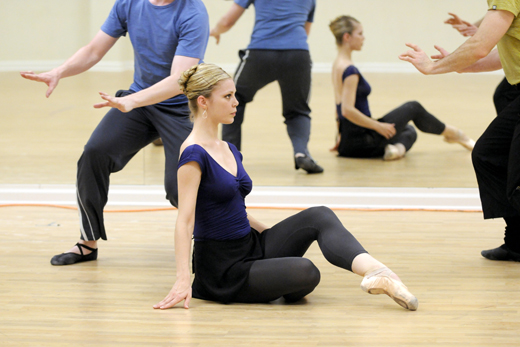 I saw this shot, complete with reflections. I purposely cropped tightly so that only her face was visible. But after closer examination I rejected it, although up until that moment, I thought it was THE shot. 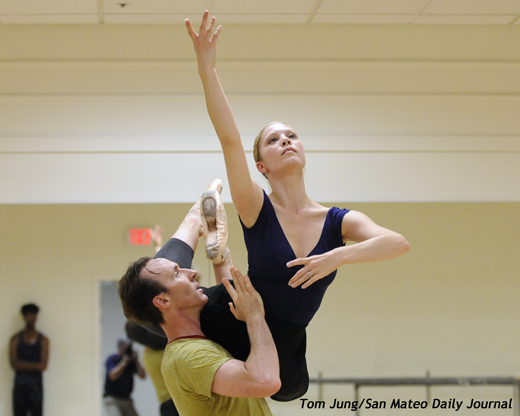 Finally, my big break. During one of the practice routines there was a lift. While I was able to capture just a few images (the lifts don't last very long), I took this last shot from a low angle which eliminated most of the distracting details at the floor level. It would have been wonderful if the dancers were closer to the mirrored background so I could have made a version with the dancers' reflection. Alas, it was not to be. But in that moment of attempting to locate the ideal vantage point, low and level with the mirror, I managed to get one reflection: my own. Ouch.

Shooting in the middle of a serious practice session doesn't allow for any manipulation of the subjects. I really couldn't justify any attempts to re-position the subjects for the sake of a tighter composition. I am thankful that I got the shot that I did, although it has probably already been made hundreds of times. But it did capture the spirit, and with the exception of the photographer's reflection, met the criteria I had established before I started shooting.

Final Note: You may be wondering why I seem to take so many "rejects". The answer is simple. First, you never see the exact moment of exposure when using a single lens reflex camera. Second, I don't "shoot and chimp" because I might miss something interesting. And lastly, when I move from side to side to find the best subject arrangement, I can't always see what's going on in the background. So there are going to be a lot of rejects. I just don't submit them for publication.