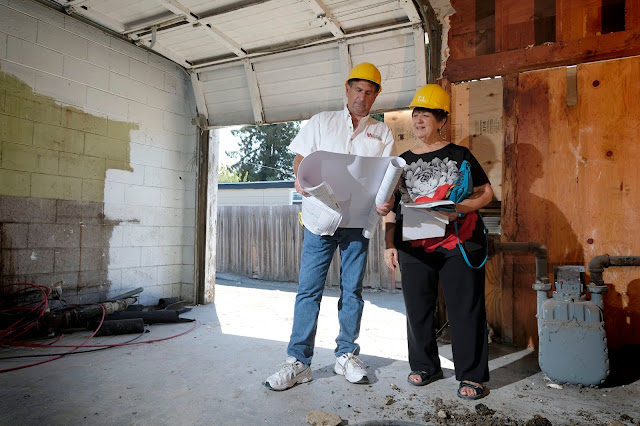 I made this photo as a possible "pre-event" shot to advertise an upcoming benefit to raise funds the makeover of this former laundry into the new home for a no-kill cat shelter in the Peninsula. I had visions of showing one of the shelter's administrators talking with the contractor who was responsible for the work. Since the goal was to show the conversion as a work in progress, and that additional funds would help move the project along.

One Setup, Two Shots: To illustrate the difficulty of the re-model, I thought I would include lots of construction debris in the foreground, but remembering that my 10-24 F 4.0 Fuji lens could give you both a wide perspective and a wider perspective, I found my basic composition at the 24mm setting, and zoomed out to 10mm for the wider view. Easy Peasy.

Props: I borrowed two yellow hardhats to suggest a "construction" theme, which they succeeded in doing. However, the Birkenstocks worn by the subject on the right seem to contradict the "safety first" mandate suggested by the helmets. I hoped I was the only one who noticed, but I know for a fact I wasn't.


Lighting: This is a three light setup. The Key (main) light was a radio-triggered Li-on speedlight, which enabled me to adjust the light output from the controller, depending on the look I was trying to achieve.  It is mounted on a light stand about 6' high (I didn't bring a 12 footer) positioned just beyond the left edge of the photo. The flash was feathered up slightly  to prevent over-exposing the foreground. A second SB-800 with a CTO gel was zoomed to thrown a hard, narrow beam of light at the plywood at camera right. I used a Black Foamy Thing to keep the light off of my two subjects. It was mounted on a handy latter using a Justin Clamp. The added warmth suggested the presence of an incandescent light coming from somewhere, and since there are now visible shadows, I could surmise that a single, bare light bulb might be dangling from the ceiling. I liked the inside/outside suggested by the two different light sources.

Oh yeah, there's a third speedlight serving as a low fill. The power was low to prevent the appearance of a second shadow to complete with those created by the Key Light. 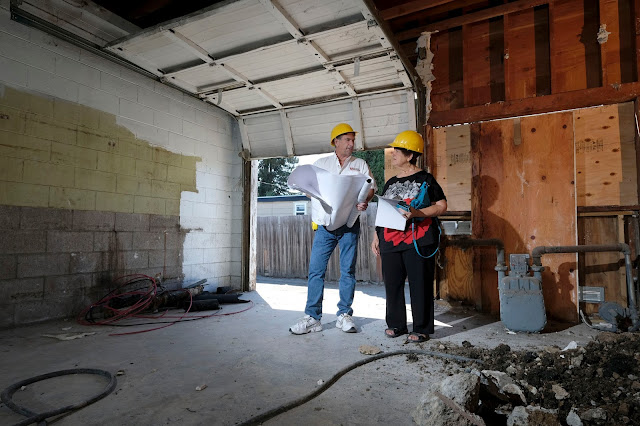 The Second Shot: As I mentioned, a second, wider shot could be made once the first was "in the can". By zooming out and adjusting the composition slightly, I have a photo that suggested "big project". Notice that the tight beam angle of the reddish accent light skips over the top of the asphalt chunks on the floor, which helps to keep the viewer's attention towards middle of the photo. Since the viewer's eyes will always be drawn to the brightest area, the plywood background doesn't compete with the open garage door.

I liked how the second, wider shot turned out. I did not submit it for publication, as I was sure that the editor's would have cropped the image to resemble the tighter first image.
Posted by Tom Jung Photography at 12:10 PM No comments: Links to this post