Twins Separated At Birth: Just as a reminder, the flash I'm describing is the eVOLV 200, Adorama's house branded version of the Godox Wistro AD200.  I chose the eVOV200 over the Godox because Adorama offered a bundled packaged I couldn't pass up.

Burn Out: In my last post, I managed to "singe" a flash tube contact during a rapid fire sequence a full flash output. I immediately ordered a replacement head and flash tube, which fortunately for me were not particularly expensive.

I am  NOT going to blame this misstep on the manufacturer, as there are ample warnings about overheating. For that matter, the unit still functioned in spite of the burned contacts, so I really can't consider this a product fail.

Practical Application - The Wescott Halo Light Modifier: There is one place where the unit is an unqualified bullseye. Because of its compact size, radio triggering capabilities, and TTL automation, it can fit inside a Wescott Halo, a cross between a shoot-through umbrella and a softbox.

Here's the deal: In the past, the Halo has been difficult to use in the field. Before the availability of affordable TTL supporting radio flash triggers, one was forced to expose manually adjust everything. This meant that you had to reach through the Velcro-secured access slot in the cone-shaped shroud to adjust the flash output using the braille-labeled control buttons (just kidding, there aren't any). The shroud coaxed all of the light to exit through the umbrella shaped diffusion panel, eliminating unwanted light spill when used indoors.

Mounting The Flash: To mount the flash to the Halo, you need at least one male spigot and a standard umbrella bracket. Because the flash is enclosed in the cone-shaped, reflective shroud, conventional, line of sight triggers won't work. Even if you could trigger the flash, you still had to make the adjustments manually. These are some of the difficulties that made me less likely to use the Halo. That situation was about to change. 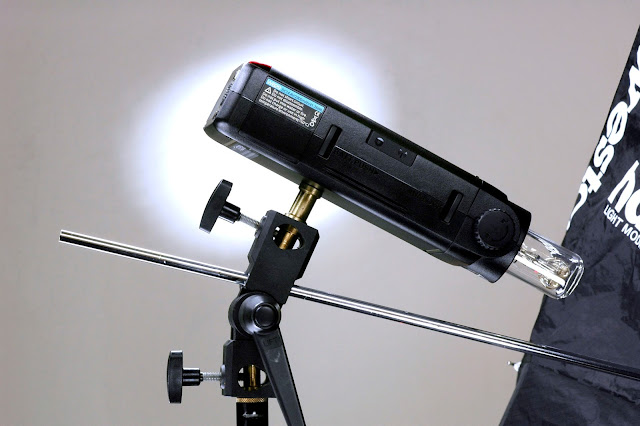 Here's the eVOLV 200 mounted on an umbrella stand with the Halo's shroud folded back so you can see the mounting. The flash body has two 1/4 x 20 threaded sockets to facility (nearly) on axis mounting. I needed two brass spigots so the flash would clear the thumbscrews. When the shroud is replaced, the back of the flash doesn't touch the inside surfaces.

Bare Bulb Advantages: Another advantage of the eVOLV 200 is the option to use its bare bulb head. The advantage, when using the Halo (or any other enclosed softbox-type light modifier) can be seen in this photo. Both were made at the same setting, and simultaneously adjusted in Elements to keep the comparison valid.

In the image on the left, you can clearly see the rectangular light spread created by the H200 Speedlite Flash Head included in the package. If memory serves, it spreads the light beam to the width and height of a speedlight set to the 35mm light spread. Not too wide, not to narrow, but a compromise nonetheless. Notice too that there is no backsplash of light on the background, as there would have been if I used a shoot-through umbrella. I am now certain that the only light that hits my subject is the light I aim there.

The image on the right was taken with the bare bulb flash head in place. With the flash tube in parallel (or nearly so) alignment with the internal umbrella shaft, only a small fraction of the light goes directly forward. Nearly all of the light leaves the tube sideways to bounce about within the Halo until it eventually finds its way "out of the front". You can see that the light is very even over the entire surface, giving the photographer a much softer shadow when the Halo is used up close, as it should be. One might argue that this arrangement isn't particularly efficient, but in theory all of light eventually finds its way out. It's not wasted, just redistributed for maximum softness. 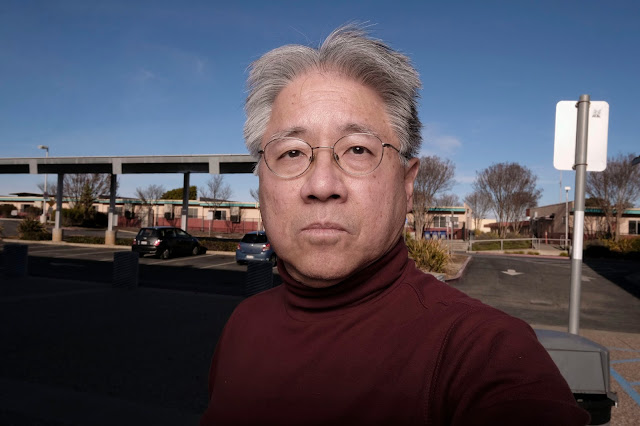 Obligatory Selfie: Shooting with this combination outdoors, I now have a combination that is powerful enough to use with the Halo and similar softbox types of modifiers in conjunction with direct sunlight. In this selfie, I standing in the shadow of a building with the blue sky behind me. I was also surprised that the Halo didn't seem as susceptible to being toppled by a breeze, gentle or otherwise. A sandbag would have made it even less so. 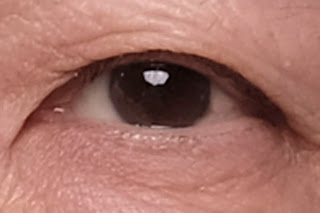 For what it's worth, you can see that the catchlight is very even from edge to edge, with no apparent hot spot in the middle. To repeat, the light from the bare bulb, placed inside of the Halo, is more evenly distributed across the face of the softbox, producing a much softer light overall.

TTL With The Nikon: Another strong selling point was the ability of the flash to utilize TTL exposure Control. In a nutshell, it worked well enough with the Nikon controller, but didn't work at all with the Fuji. This was a huge disappointment, since I use both systems and hoped I could get some cross platform adaptability. However, I know that the same Fuji transmitter works in the TTL mode when coupled with the Adorama Li-On R2 TTL Fuji compatible flash. At some point, though, I may give up on TTL completely, at least for location shots where I have the time to nail down the exposure manually.

Wish List: There is one accessory I'd really like to see. Since the head is removable, why not make an extension cable so the head can be mounted in places where the flash body/battery pack won't fit? Using the Halo would be be much easier without the weight of the battery on the inside. If it could be clamped to the outside of the light stand, it wouldn't put so much weight at the end of the light stand where it would accelerate the rate of fall to the ground should a gust of wind topple it.

In spite of its shortcomings, I'm pleased with its 200 watt second output, which puts it in the same category as my Norman 200B flashes, minus the weight and bulk.That is Way Cool.
Posted by Tom Jung Photography at 12:10 PM No comments: Links to this post