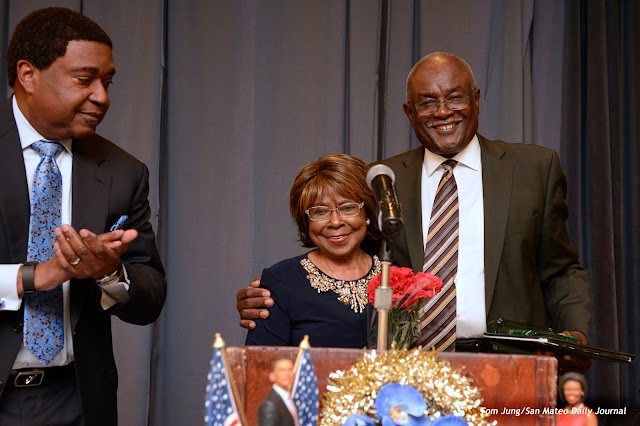 Sad to say, I still miss the forest for the trees when choosing which photo to submit. A photo from the 90th Anniversary of our local NAACP chapter wouldn't normally run on the front page. However, a respected attorney, a local school district activist, and a former district Superintendent do make for a great local angle.

My tale of woe is actually a tale of two stories. The first involves the keynote speaker at the 90th Anniversary of the NAACP's San Mateo Chapter, an attorney active in civil rights issues. The second involves a local educator and activist receiving a Community Service Award. Because of the two separate events (the speech and the award), I submitted two photos, one for each event. 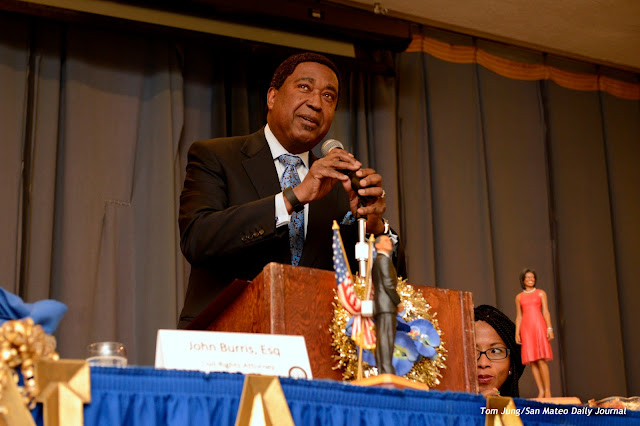 Some speakers are easier to photograph than others. The facial expressions and hand gestures that we watch every day are often unflattering when captured at 1/125 of a second. And without the spoken words, synchronized withe the gestures, those captured moments can look a bit awkward. There were only a few shots that were were acceptable, this one being the best. "Burning" the name by the podium added a bit of detail. The half-face of the woman in the background was extremely distracting.

This next shot was meant to focus on the award recipient and the former Superintendent. Again, it was submitted as an 8x12, with the assumption my editor would crop it to an 8x10 or 8x8 format. 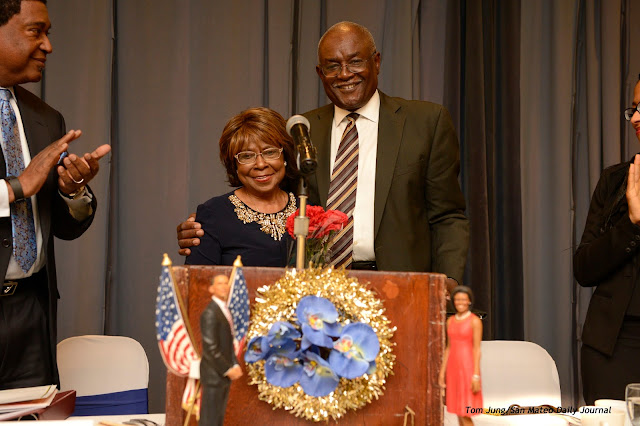 I normally submit my images in a 8x12 format so the editor has some extra real estate in case a wide photo was needed. An 8x10, or even an 8x8 might have been better, but that's for my editor to decide. Still, it was the best of the group, so I submitted it.

You can see that these two croppings, 8x10 and 8x8 put the emphasis on the presenter and the recipient. The last 8x8 cropping would make a fine image for a gift, providing you can sill find a square frame.

When my editor saw the uncropped 8x12, she immediately wanted to know if I had a shot showing more of the speaker on the left. After looking through my other images, I found one that might work if properly straightened. I cringed a bit at the clipped left edge, so I closed my eyes and sent it. A few moments later, I opened my eyes and saw her response: "Oh, perfect!".

The Image Maker in me fixated on the empty space the separated Subjects #1 and #2. And with so much of Subject #1 missing, submitting it would have violated my fundamental rule about keeping as much of the subject's profile in tact. But the Story Teller had to acknowledge that in spite of the composition, Subject #1 was the keynote speaker, and therefore an important part of the event.

This event was yet another reminder to keep an open mind and sharp eye out, especially the details that help the story forward. Hopefully when I'm on my next assignment, the lesson will stick.