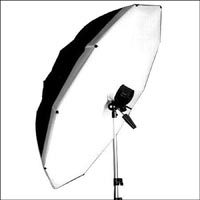 The Photek Softlighter has been described by many as the "Poor Person's Octabox". It is essentially a regular reflective umbrella that employs a translucent diffuser that covers the umbrella like saran wrap covers a bowl. In the center of the diffuser there is a sleeve that allows the head of the speed light to pass through diffuser, allowing the light to bounce off the inner surface of the umbrella and pass back through the diffuser to produce a broad, soft light source.  It's not as easy to set up as a Lastolite EZbox, but then again it costs a lot less. I like the Softlighter for its fast and easy set-up, especially if the Black Plastic Thingie is used to hold your speedlight. And like all light modifiers of  this size, it gets blown around in the wind. (Photo: Adorama.com).

By the way: If you haven't already done so, put a small Carabiner in your camera bag when you travel afield. You can use it to link a D-ring on your camera bag with one of the base supports on your light stand to make an impromptu sandbag for a little more stability in the wind.

The Photek Softlighter is an inexpensive lighting tool that really benefits from this on-axis speed light mounting. It is essentially a regular reflective umbrella that employs a translucent diffuser to cover the umbrella like saran wrap covers a bowl. In the center of the diffuser there is a sleeve that allows the head of the speed light to pass through diffuser so the light to bounce off the inner surface of the umbrella and pass back through the diffuser to produce a broad, soft light source. 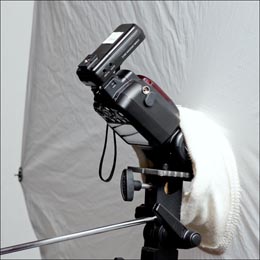 You can also see that the sleeve easily stretches around the speed light when mounted close to the axis. Also, the body of the speed light is now outside of the Softlighter, so it can be easily adjusted .

Since proper mounting of the Photek requires a short flash to umbrella distance, the light is concentrated into a small bright spot centered on the shaft. You may want a Stofen Omni Bounce to help spread the light out to the edges of the Softlighter, giving a larger effective light source.

I was checking the web to see how other folks were handling the "flash in the hole" problem. One clever fellow added a piece of angle iron and a cold shoe to create a bracket to bring the flash much closer to the umbrella axis. While succeeds in getting the light ver close to the shaft, it puts too much weight too far from the umbrella bracket. The BPT keeps most of the weight closer to the light stand, something that seems to make more sense to me.

You can see that I installed a Calumet Wireless Trigger Kit receiver to the hot shoe. According to the description, "...This trigger set will allow you to trigger your flash over 100 meters away...". I think that's a little optimistic, but probably sufficient for the hobbyist wanting to experiment with wireless flash triggers.

For those with a Nikon DSLR or a Sony R1 with flash synchronization at any speed, this arrangements allows for easy camera connections using a modified SC-17 cable or a long PC-Male / PC-Male flash cable. Click here for some additional information.

I'll have some sample images in a future post.
Posted by Tom Jung Photography at 12:10 PM No comments: