Busted:  The cover image I described in the earlier blog was not as well received as I had thought. Perhaps the GED isn't something we joke about. But there were some objections that it wasn't apparent why the student was suffering so. I guess the tongue and cheek reference in the caption wasn't enough to carry the image. I was fully prepared to re-shoot the photo. It was cutting it pretty thin, because the files had to be submitted to the printer that very afternoon. And since there was as caption re-write, along with some yet to be written text still waiting in the wings, this shot had to be a keeper on the first take.

The re-shoot did give me a chance to show some "behind the scenes" stuff about shielding the LCD monitor from any glare caused by the bounced electronic flashes. If you look closely at Photo #1 and compare it to last week's version, you'll see that I shifted the main light to provide more of a ceiling bounce, just what you'd expect from a typical classroom. The light in the background is so flat it is barely there.

You can see the glare on the LCD in Photo #2. If I didn't do something to minimize it, it would be impossible to see the GED website. The solution was to build a roof over the monitor to prevent any glare from above, and a to position a "wall" to prevent spillage from the walls.

In Photo #3 you can see the placement of the two "scrims" (the technical term) held aloft with light stands. I used Calumet 42 x 78" Aluminum Frame with a silver/black facing. You can see from the shadows that the lighting for this setup shot was still high and from camera right. This was before I decided to go with a straight-up ceiling bounce.

Photo 4 shows that the monitor is adequately protected from glare. The surface is nearly black. You can also see the light fall-off in the lower edge of the frame.
On the day of the shoot, I arrived at 8:00 am, an hour before the first students were scheduled to arrive. As you can see in Photo #5, I made a decision to reverse the positions of the two monitors, mainly because I wanted the student to face camera left. The glow in the student's face was provided by a single SB-800, bounced off of a sheet of blue paper taped to the LCD panel. This is a McNally-ism, a trick that Joe described in one of his books. After some trial and error, I managed to align the speedlight so that it was completely hidden by the monitor, although some tell-tale glare can be seen on the desktop beneath the monitor. You can also see the blue catchlights in my glasses. The bounce flash room light was cut back by covering the reflector with some cardboard, a quick an dirty way to lower the light levels. I liked the effect, but didn't feel it appropriate for a classroom, so I removed it. 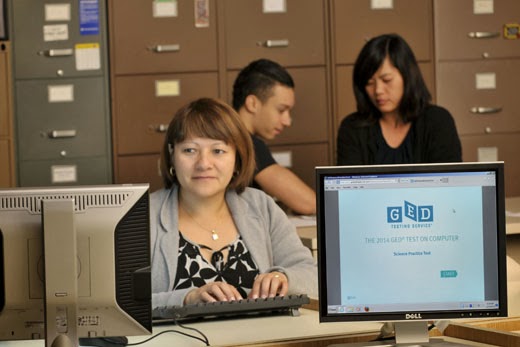 Once the photo was populated with real people and the proper display was transmitted to the monitor, the image makes a little more sense. It had been my intention to make the exposure with the widest possible aperture to blur the three subjects, but in my haste to get the exposure under control, I started to use smaller and small apertures, resulting in more focused detail in the background. So if anybody asks if I knew the background was out of focus, I simply say that that's what I intended. After all, it was the GED logo that was important, and that is sharply rendered. By the 10:30 transmission deadline it was on its way to our graphic artist who would combine the image with the cover text and tweak the file so it would print properly. 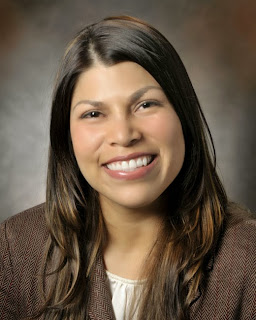 Feature Photo: After clearing my equipment from the set, I prepared another classroom for a quick head shot of a new staffer. It took an hour to get everything in place and adjusted for the shot, with most of the time spent just getting the equipment out of storage. This portrait was made in less than 15 minutes. This was followed by the creation of a caption and inserting the image and text into a blank page in our brochure. Eventually all of the pieces fell into place and the files, including the cover layout and the headshot, were electronically transferred to our printer. For the technically inclined, the main light was provided by a single SB-900 fired through a 24" Lastolite Ezybox with a white-surfaced Calumet Frame for a bounced fill. A small softbox was placed overhead to provide some separation for the hair, an a snooted speedlight, pointed directly at the background, gave a bit of "glow" on the background.

I must admit that the 15 minutes spent with my one last subject was much less stressful than the time spent getting the cover shot, and was the real high point of a well-spent day.

Posted by Tom Jung Photography at 12:00 PM No comments: