Pancakes Fundraiser - The Value of Cropping 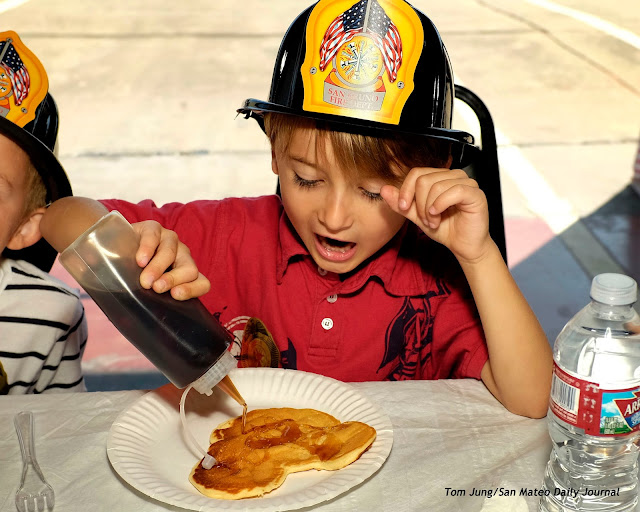 This entry is about how cropping saved a photo that was "bombed" by my subject's little brother. The image was one from a series of candid shots made between 10:13 through 10:21 am, proof that getting "the" shot in one take is a very rare occurrence.

The photo was made with my Fuji X100S with the native 35mm equivalent lens. I removed the wide angle adapter to get a slightly closer "look" to the image, even though I'm only about three feet from my subject.  This is a cropped portion of a larger image, as you'll see. The shoe-mounted Nikon SB-80DX speedlight is aimed straight up and bounced off of a paper plate. Exposure was 1/640th of a second, F 4.0, ISO 200. Power output on the SB-80 wasn't recorded, but I did add an SD-8a accessory battery pack for faster recycling.

Conning Kids: Sometimes you can "con" kids into doing what you want. I originally started talking to Little Brother, when Big Brother (in red) wanted part of the action. When I mentioned I was only interested in photographing somebody who was actually eating a pancake (he already finished his eggs and sausage), BB went back and got a second helping of pancakes, and as he squirted syrup on them, LB started to mug for the camera. As I watched the syrup being poured, BB's expression just happened. I'm not sure exactly what it meant, but at that moment, all of BB's concentration was on the pancakes.I made three shots.

You can see that the third shot shows both of BB's eyes, and I liked the dynamic angle of the syrup bottle. This last shot was the winner, LB notwithstanding. 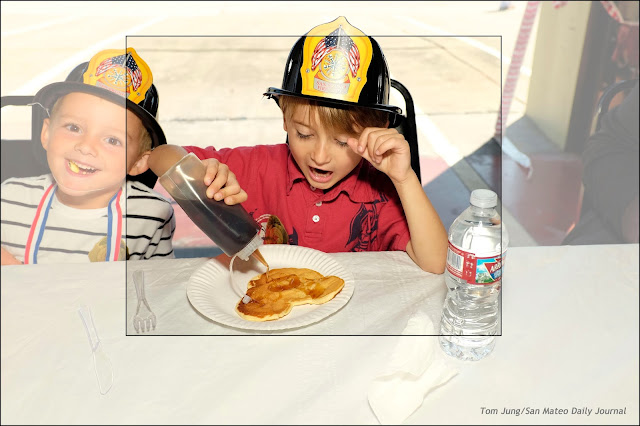 Cropping To The Rescue! You can see how the crop eliminated all of the details that detract from the central image. Due to the placement of BB's elbow, it would be impossible to eliminate all traces of LB's face. But by eliminating all traces of LB's eyes, I moved the viewer's attention toward BB pouring syrup, who was apparently feeling some excitement over the process.

In my mind, I already had the shot, but continued shooting anyway, looking for a cute "eating shot". I quickly realized that an open mouth full of half-chewed food just didn't make it visually, so the series was dropped from consideration.

Final Notes: The 1/640 shutter speed made possible by the X100's leaf shutter allowed me to use a shooting aperture of F 4.0, which in turn required less light from my speedlight, which translated into brief recycle times. Had I used a DSLR, I could have extrapolated these exposure settings to 1/250th of a second exposure and an aperture size of  6.3. This would have given me an identical ambient exposure, but the comparable flash output would have required more than twice the light, which may have slowed my shooting.

The Fuji did give me some grief in the flash department, but having learned from the Carnaval debacle, I recovered and quickly got to shooting.