Within the span of a single week this 200 Watt-Second wonder has simplified my setups for shots made out of doors. This shot, taken to illustrate an article in the Journal's Before The Court column, shows Judges from San Mateo County. I've photographed this group for a number of years, and everyone pretty much recognizes me, at least to the extent that they know I won't take up too much of their time.

In years past, I photographed the group on a short stairway in the lounge area next to the bar at a local luxury hotel. This year, however, somebody put a sculpture of Planet Earth right at the base of the stairs, eliminating it as this year's photo venue. After chatting with one of the Judges, I was told that the group would like the shot taken outdoors, a conclusion I had already come to.

A photo taken under these circumstances would have been  difficult were it  not for my (relatively) new dVOLV200 flash. I've mentioned it in other posts  but hadn't used it in the field. This shot was the second of two shots, take outdoors, where the flash served either as a key light (Photo #1) or a fill light (Photo #3).

Let's Talk Technique: I had lots of time to prepare for Photo #1, so I resorted to mounting the flash on a 12-foot light stand. Tall stands are essential for shooting large-ish groups because you need to put some distance between you and your subjects, and you need the altitude to minimize eyeglass glare and forehead shine. If I were forced to establish a rule of thumb, the height of your light stand, relative to your subjects, should be between one-half to two-thirds the distance between you and subject, assuming that your shoot at, or near, the  base of the light stand. 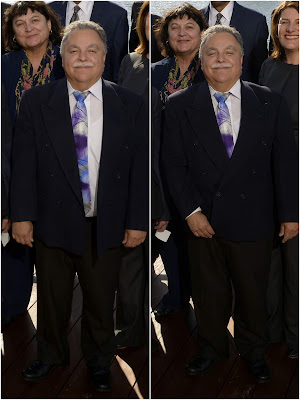 Posing Hint: One problem that I often encounter is a subject who wears his jacket unbuttoned. Honestly, it makes it look like donning the jacket was an afterthought. I've found that men's jackets are usually rendered unclosable as the result of good living or a cell phone hidden on the waist. It is for that reason that I tend to put the buttoned jackets in the first row, open jackets behind. You can see that a white shirt worn with a dark jacket is quite noticeable.

To fix this, I had my subject hold his coat shut with one hand. If I had him do what I've always called a  "French Parade Rest" (the hands are crossed in the front instead of the back), the illusion would have been complete. I chose the open coat version (Photo #1) because it was the only shot where everyone had their eyes open.

The improvement was dramatic, although I will remember to have my subject cross his hands next time.

When I started shooting groups with an off camera flash, I had mistakenly assumed that my shooting position wasn't critical. Location does matter, as I found out that if I moved between the light stand and my subjects, I risked casting my own shadow onto their smiling faces, something that looks a little odd. In Photo #2, you can see that several photographers standing behind me managed to cast their shadows on this group of Halloween emojis. Keep in mind that these photographers were actually being very considerate, standing behind me as they did. But it was the location of the light, no my shooting position, that was the key factor. It could have been solved by a higher flash position, but my stand was running out of elevation.

Photo #3 shows a much wider group, a higher degree of ambient light (blue sky bouncing off of the concrete). I still relied on the flash to provide my key light, but it was helped by the "volunteer" fill light provided by the sky. This gave the flash a welcomed boost. For the most part my subject's glasses are free from glare. I had only a minute to set up the shot, and spent most of that time arranging the subject.

Final Notes: Right now, I'm pretty happy with the performance of the flash. There are some important points I'd like to add, lest this post turn into an eVOLV love-fest. 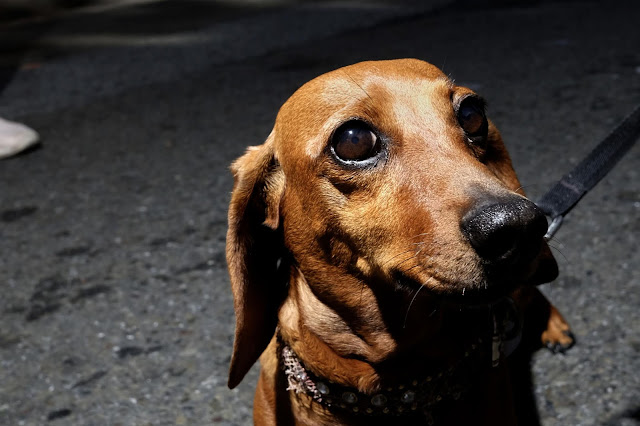 Things must be pretty bad when the lead photograph from San Francisco's Carnaval 2018 is that of a twelve year-old Dachshund who happened to take a liking to me. This was a grab shot, since I hadn't planned on encountering a subject so anxious to leap into my lap, and almost instantaneously decided I wasn't worth the effort. Luckily the autofocus on my Fuji X70 locked on quickly, but my lighting, a hand-held NikonSB-80 wasn't well positioned.

My Camera D' Jour was a Fuji X70 which worked well enough, although it is a small camera which can makes adjusting the camera difficult. This year I was making a conscious effort to use some of the techniques of practiced as a film shooter in the early 70's. One of the earliest techniques was Zone Focusing. In practice, I would chose a shooting distance (remember, auto-focus hadn't been invented yet), determine the proper flash output for that distance, and adjust shutter and aperture accordingly. Since I spent a lot of time with leaf shuttered cameras, I got used to flash synchronization speeds from 1/125 to 1/500 of a second, a convenience that the X70 afforded me. When these adjustments were made for, say, five feet, I'd simply position myself at that distance from m subject an fire away. With a little luck and lots of depth of field I would usually get a properly focused image. 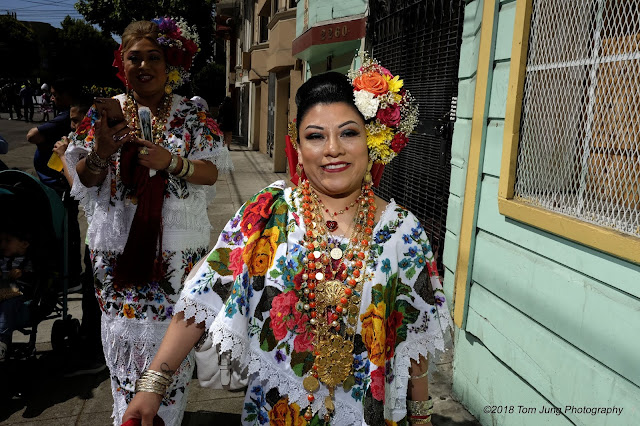 This shot was made with the camera held at eye level and the flash held high overhead. I connected the two with a neutered Nikon SC-17 flash cable. The camera was set to manual focus at a distance of 5 feet. I just step up to my subject and encouraged her to walk towards me. By walking backward, I kept the proper distance and made the shot. 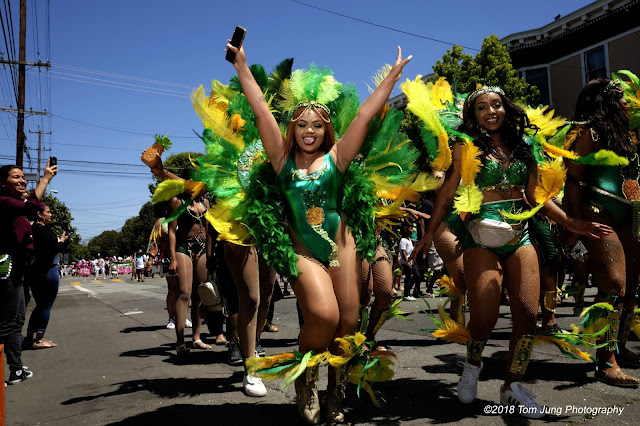 The system worked just as well at greater distances where the flash served as a fill light, rather than a key. Here the camera's tilting LCD monitor to position the camera low to the ground for what is essentially an up-shot. With the flash cable stretched to full length, my light is positioned high enough to cast a chin shadow and minimize over-exposure of the dancer's legs. Unfortunately, I was pretty much guessing at composition, since glare prevented me from composing my images accurately. 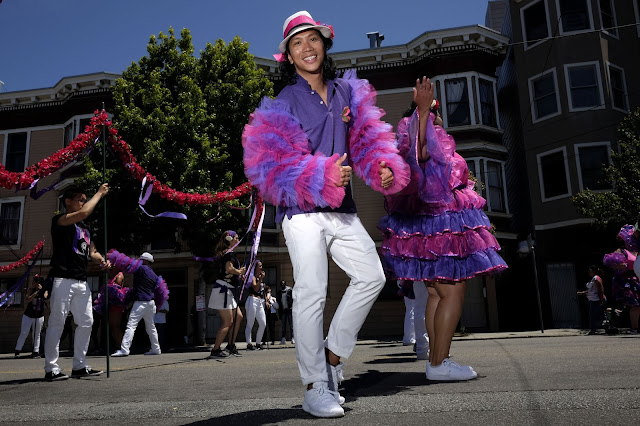 When hats are involved, a lower angle is a better better, lest my subject's eyes be lost in the shadow of the hat's brim. The white pants are a little "hot", since they are indeed closer to my speedlight than my subject's face.


I made this photo without flash and with the exposure in the auto mode. Since 90% of the frame is lit by some light bouncing off the building behind me, the exposure appears very even except for the highlights provide by the back lighting. An image so composed doesn't have to bright highlights on the subject's face, and is rather flat.

This year it was harder to find a "money shot", one that would be happy to have in my personal collection. I really like the way the strong silver lines bring the viewer to the dancer, something of an homage to the psychedelic spiral patterns used in posters during the seventies. The fact that my subject is not facing the camera doesn't draw attention away from the pattern that radiates from behind her. 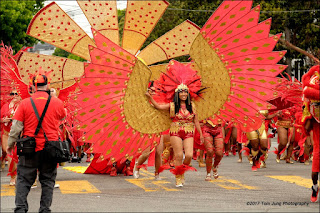 You can see from this photo taken in 2017 that the costume is worn like plumage, and and is strapped to the dancer's back and guided with a twin handle bar arrangement.

Alas, no great work of art emerged from this year's Carnaval, but it was still fun.And while the images may tend to resemble earlier efforts, the drummers, the marching bands, and the dancers still make it a wonderful way to spend a Sunday morning. Who knows, next year I might not even bring a camera. 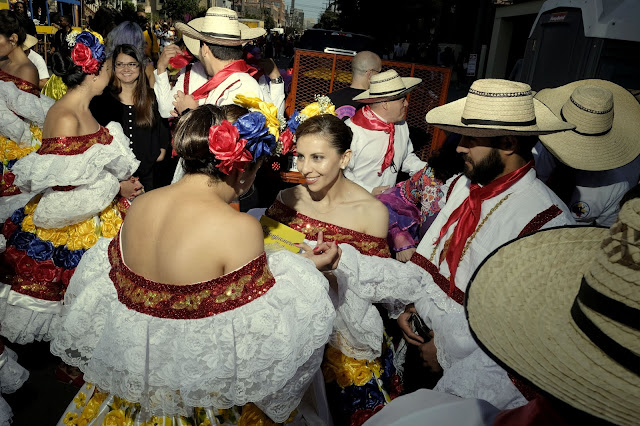 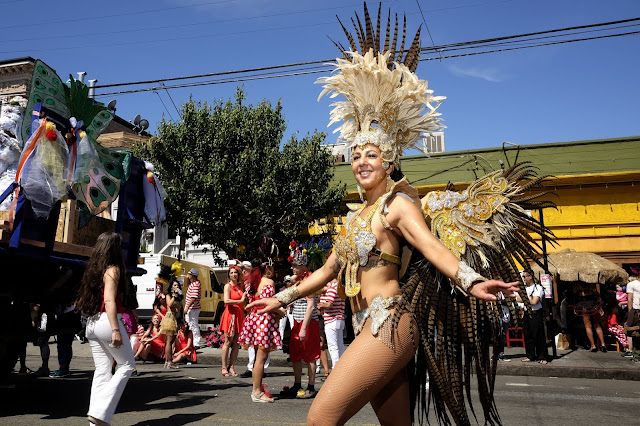 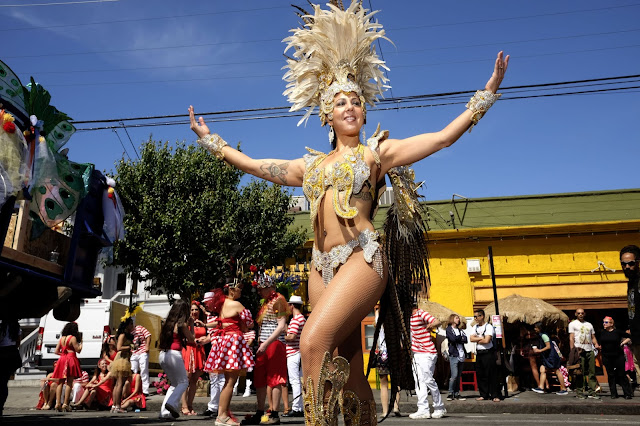 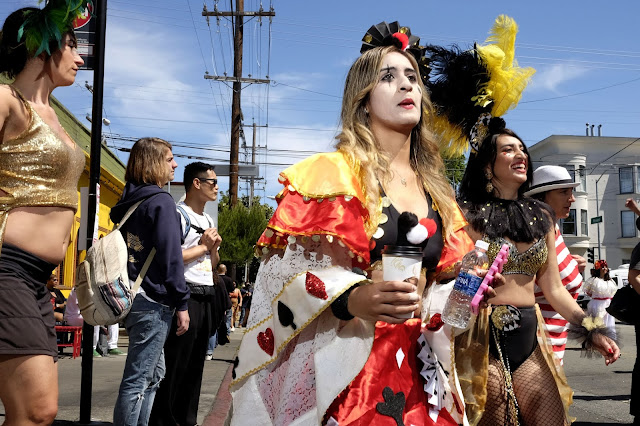 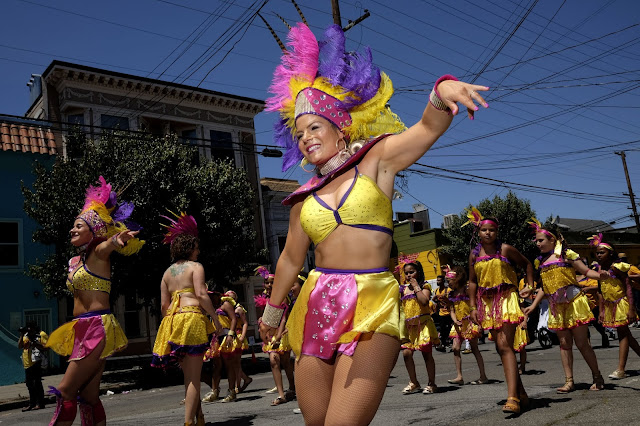