Everything I Know About Shooting Groups 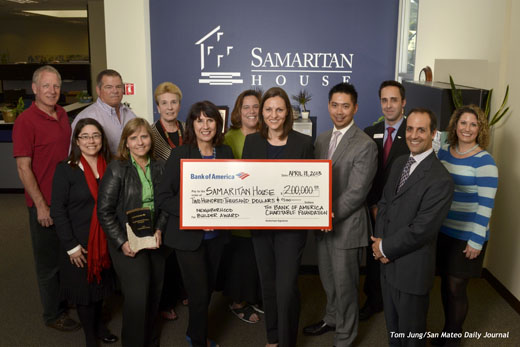 I frequently shoot groups for the Journal. I will admit that I am not great at it, but I have always felt it's the one thing that I'm most often called upon to do. It requires a minimum of creativity and a maximum of preparation, since the more people you have, the greater the chance that something is going to go wrong. Count on it, somebody will blink, look sideways, or just fail to follow instructions.

One personal observation: Well assembled and well photographed groups are pretty much taken for granted. But when something goes wrong, it really REALLY goes wrong!

Being Prepared: Looking back, I could say that the level of preparation directly effects the quality of the shot. It's pretty easy getting rattled when a dozen or so people are waiting for you to give the directions and make the magic happen. Once you get the technical stuff out of the way, you can concentrate on the arrangement and the expression. But get rattled, and things can easily slip away.

For this next shot, I thought I would be creative and find a location with a neat background. I had my requisite Zumbrella with twin speedlights on a light stand set and ready to go. My pre-test shots were properly exposed, so I thought I was ready. My equipment was pretty safe (after all, who wants to be seen carrying an umbrella/speedlight setup across a crowded hotel lobby), so I wandered off, looking for my contact and my subjects.

Because of the low ceiling I decided to remove the Zumbrella completely, and instead pointed the twin SB-800 speedlights at the wall-ceiling juncture just behind me. This would give me a good bounce surface with a hint of warmth. When I was ready to start shooting, some additional subjects "jumped in" at camera right, but because I was still thinking about the flash set-up, I didn't pay attention to where they were standing.

That's Anna Quindlan, fifth from the left, by the way. 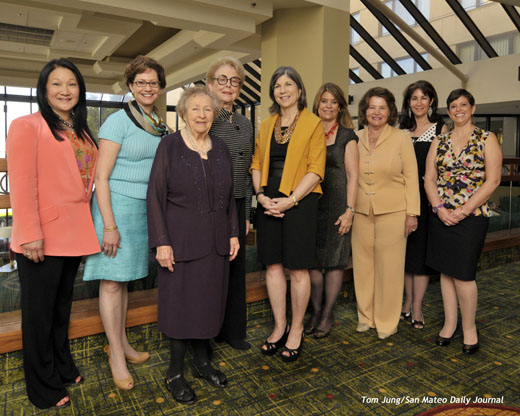 Bazinga! While the heights on the rightmost four subjects were reasonably even, they were farther from the camera than those on the left. If you look at the carpet, the camera-left subjects couldn't back up (there's a rail behind them), but I could have/should have had those on camera-right come a bit closet to me. This would have evened out their heights. This is more critical when using wide angle lenses because the perceived distance between the foreground and background is exaggerated.

Flop. My absolute "favorite" flop-shot was taken in 2010. 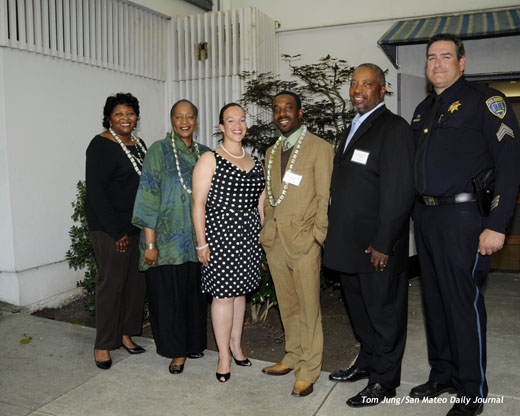 When I chose an outside location, I didn't think that I would be working in such close quarters. And as luck would have it, the Commander wasn't reliably communicating with my remote flashes, so I quickly converted them to SU-4 at full manual setting and made some test shots. This is guaranteed to make both the photographer and his subjects even more nervous, and somewhat less attentive to details.

Its easy to see where I went wrong. The subjects were arranged at an angle because the sidewalk was narrow and I had a row of parked cars behind me. The two gentlemen on the right look so much larger than everybody else. The photo could have been salvaged had I moved my two tall subjects to camera left, further from the camera, where their heights might have be been less obvious.

Seated Subjects: This shot of a recent group highlighted something that is starting to come together. One problem is positioning the legs. I hit upon a suitable combination that seems to work. I would have gone to greater lengths to refine the pose, but Judge Labson-Freeman (back row, right), could only spare a minute, so I had to shoot faster than I normally would. As it was, I made three exposures in that single minute, and this shot was the best. 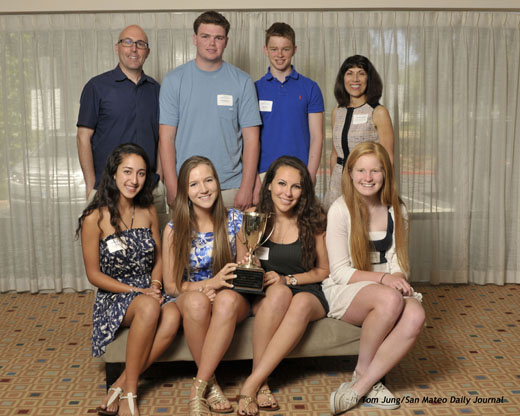 First The Good: I think that the first young lady's pose is the most graceful of those from the front row. For future use, I'll remember to follow this checklist:
One other thing to remember: When your subjects are sitting, do whatever you can to get some distance between you and the subjects. If you get too close, the kneecaps will appear larger than they should.

This is not a polished photo, but I now have a strategy for establishing a more pleasing arrangement of the foreground legs. Next I'll have to work on the feet. And a quick reminder: Never try this on a guy!


Now The Bad: Notice the second standing subject? He looks waaaay too wide. This can be fixed by placing a less wide subject in slightly in front of him. You can see how this placement made the third standing subject appear thinner. I would suggest that the only person who has both shoulders showing is either the most important, or the thinnest.

So there you have it. Everything I know about shooting groups.
Posted by Tom Jung Photography at 12:10 PM No comments: