In an earlier post, I heralded th`e arrival of the new Fuji EFX-500 flash, shown at left, an OEM flash with enough power and features to warrant a very hard look. To the good, it can take an external accessory battery pack and has wireless TTL exposure options. To the bad, it has a substantial price tag, comparable to the top of the line Nikon speedlights.  However, I still wondered if an older (sealed lead acid battery) Quantum QB1 battery pack could be adapted to work with the Metz 44AF-2 I had just purchased.

My obligatory disclaimer includes both the “you break it, you bought it” warning, and a confession that I already had two working QB 1 battery packs and a bunch of Vivitar 283 power cables for them. This meant that I already had a rechargeable power source and a cable to deliver the power to the Metz.

Original Source Information: When the Vivitar 283 was King, there were dozens of do-it-yourselfers trying to find ways to boost the number of full-power flashes available to the photographer.  This particular post (right) uses a BUSS 20 amp Time Delay Fuse as an AA battery stand-in. Since it's dimensions are nearly identical to an AA battery, two can be inserted into the chambers of the Vivitar's removable battery cluster and provide the the necessary leads for the external battery.If you follow the link, you can see that new fuses are not particularly cheap, and they're not particular easy to find locally.

Ebay To The Rescue:After a bit of searching, I found and bought ten of these precious fuses for $8.00 plus $4.00 shipping. This saved me a great deal of money when compared to the price of a "new" one. Admittedly, they had an "aged copper patina" which I'll remove with some 0000 steel wool. After that, I checked each one to be sure that they could still conduct current and hadn't already been "blown". At first, I tried juggling a single AA battery, a fuse, and the two leads of a volt meter, trying to get all the contact points to touch. I solved the problem by placing the batteries on a table, sandwiched between two paperback books to keep them in alignment. 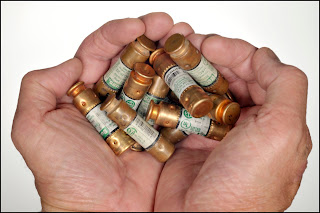 Here you see me holding my newly acquired treasure. I have no idea where theses fuses came from, but I suspect they were salvaged from some remodel or update. They're obviously used, and old. but they all checked out. I paid for ten fuses, but got eleven. Sweet.

Just for fun, I measured the fuses with a dial caliper, and found that their diameters were within 2/1000" of the nominal diameter of a typical AA battery. Their length, however, exceeded a battery's by 24/1000", which is probably not excessive, since the batteries are under spring tension from flash contacts anyway. I'm sure there will be at least that much play.

My next challenge will be getting a secure, soldered juncture between the fuses and a Quantum Battery 1/ Vivitar 283 power cable. I'll need to use a hacksaw for this operation, since I want to keep as much of the shielded wire available for soldering.

Stay tuned, folks!
Posted by Tom Jung Photography at 12:10 PM No comments: Links to this post