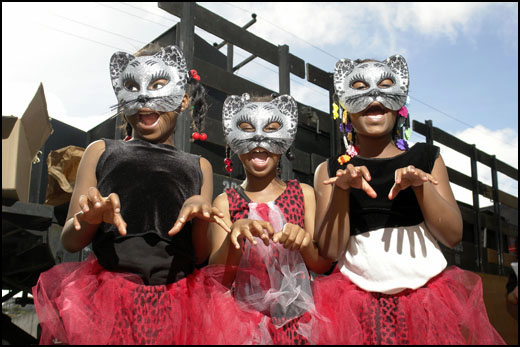 I attended Carnaval 2013 this year, perhaps out of habit, or out of fear that this would be the last Carnaval in San Francisco. Buzz had it that money was tight, and the city was reluctant to front a share of the money to put on the event. For a while, it was thought the event would not occur at all, but was given the "go" at the last minute.

Security: This year, the Boston Marathon bombing was very much on everyone's mind. When I first attended Carnaval about five years ago, officers gave my camera bag a quick examination before I was allowed to enter the staging area before the parade. Now, nobody would be admitted until just before the parade started, sometime around 10:00 am. I was told that the main entrance was at 24th Street, so I decide to wander over. When I arrived, I noticed some photographers milling around a table with an awning marked "Press". Since I had my San Mateo Daily Journal press pass with me, I introduced my self to the gentleman in charge, explained that I didn't know that there would be a press sign-up, and asked if I too could be issued a Press/Media pass. He asked to see my press pass, my Driver's License, and asked if I had a cell phone. Yes, sure, and yes. Right then and there I was given my Press Pass . I now had open access to the staging area, which was what I wanted from the start.

Walking about, it seemed as though there were fewer marching groups than before. The Guatemalan contingent did not attend this year due to a $1,600.00 participation fee. Missing too were the Low Riders and the Pirate Ship, Carnaval regulars in the past. Still, there was an excitement in the air, and groups were practicing their routines, adjusting their sound systems, and getting ready to march. 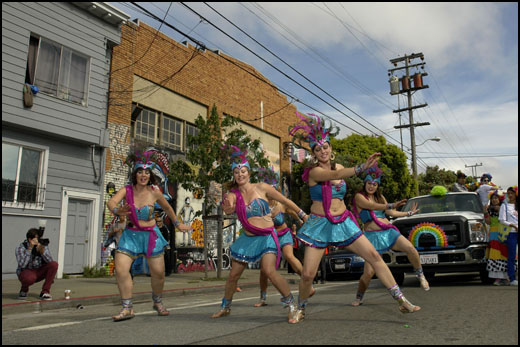 I decided to rely on my Sony R1 and a Nikon SB-800 for this assignment. I found out the the Sony would not communicate fully with the shoe-mounted SB-800, which in this instance was a blessing. The speedlight would trigger properly, but nothing else. This would allow me to synchronize the flash at all speeds up to 1/2000 of a second (the R1's top speed) without any exposure cutoff if the SB-800 was set to 1/4 power or lower. At 1/1000, I could take the SB-800 almost up to full power. I mounted one SB-800, set it to SU-4 mode in Aperture Exposure Mode on a monopod, and triggered it with a second SB-800 (in manual mode) mounted in the Sony's hot shoe. My base shutter/ aperture/ISO setting was 1/1000 of a second, F 5.6, ISO 200. In this shot, the exposure is very well balanced, since the shadow caused by the flash is barely visible on the ground. 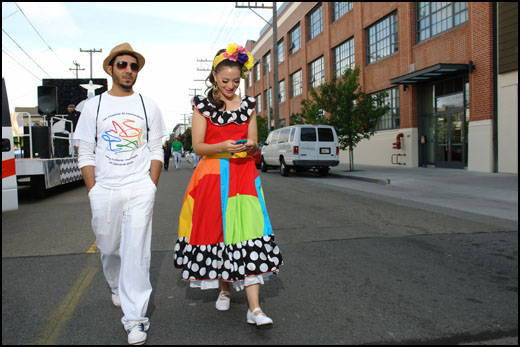 For this shot, I increased the exposure time by a factor of 4 (1/250 from the original 1/1000 of a second). This was provide a more appropriate exposure for the street which was deep in shadow. The sky, as expected, is over-exposed, but the flash, responding only to the aperture, properly exposed the waking couple. The image was just an experiment, so I get to take a "pass" on the odd composition. 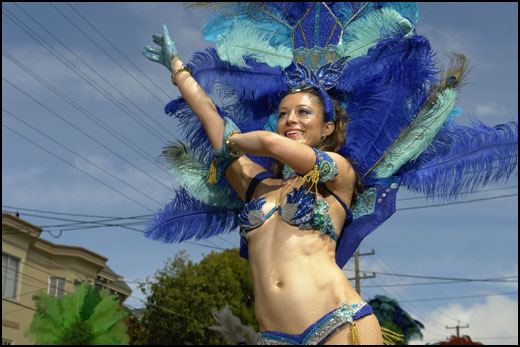 Light On A Stick: The best reason for mounting one's flash on a monopod is the ability to raise your light well above the line of sight. This is particularly important when photographing from a low angle, which the R1 has a reticulated LCD panel that makes it easy to do. Let me give you an example of how importance height is. If you are photographing a subject that is 6 feet all and you have a light stand that is 6 feet tall, your flash will be at your subject's eye level. If you are trying to achieve a 3-dimensional look to the photo, you'll need to raise the light above the subject.

Now here's the problem. My monopod is about 4 feet long when extended. When I rest the support end on the pavement, the light is just 4 feet from the ground. But if my proverbial 6-foot tall woman walks onto the set, my light is coming from below her face, resulting in a strange, up-lit look. When making a shot like this, there are two options: 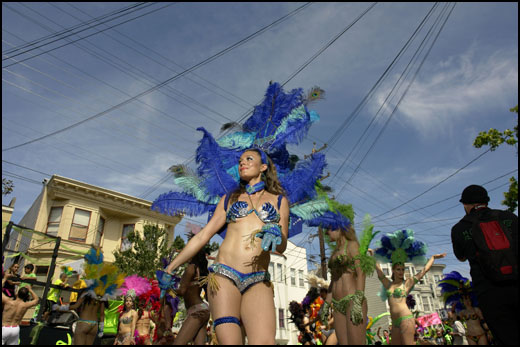 Because the main subject is actually in the shadow of the buildings behind me, the only light hitting her is coming from the speedlight. You'll know that you've achieved a proper height when you can see a shadow below your subject's nose or chin. Judging by the shadows on my subject, my light is well placed. Her torso is somewhat pale, but this is probably due to a lighter complexion, not necessarily a lighting issue. But for the most part, the balance between the speedlight output and the ambient light on the background buildings is spot on. 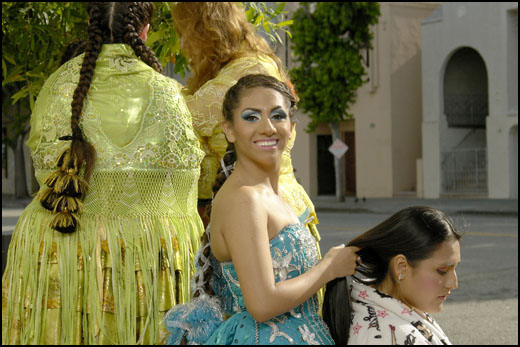 Better Lighting: I included this final shot to demonstrate the effects of a good light modifier. In this case, I shot the SB-800 through a Zumbrella to give a large, soft light source. It was quite a struggle to get the entire unit properly positioned since the slightest breeze would make it difficult to control. But good lighting is good lighting, and I think the result was well worth the effort if you can make it work. I usually don't take this route unless I'm indoors, or in a dead-still outdoor environment. I still make it a point to keep a Zumbrella with me when I photograph on location, but may opt to not use it when there is a chance that something could go wrong.

I'll be addressing specular highlights, a common problem when using speedlights, in a subsequent posting.