In September of 1989, the musical Miss Saigon opened at theTheater Royal in London, and subsequently debuted on Broadway in 1991. In an iconic scene depicting the fall of  Saigon and the evacuation of the U.S. Embassy, a reproduction of a Huey arrives on stage and is seen airlifting the last evacuees from the compound. And to add to the indignity, the choppers, after discharging their passengers on waiting ships at sea, were shown on the news being unceremoniously dumped into the ocean, as if to emphasize the one-way nature of their last flights. 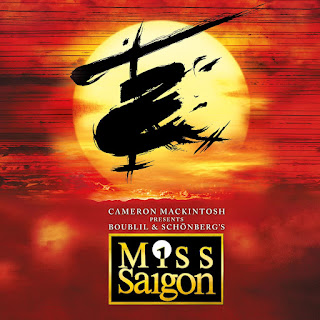 I suppose it was no accident that the stylized calligraphy on the publicity poster faintly resembles a doomed Huey "slick" plunging back to earth after completing its final mission.

Segue To 2018.  A new production of Miss Saigon is traveling across the country and is currently in San Francisco. As such, it rates a mention in the Journal's entertainment section. As it turned out, members of the cast would be visiting EMU Incorporated, a Hayward-based, non-profit organization that maintains a fully restored Bell UH-1 helicopter, the same chopper that figured so prominently in our collective memories of the war. 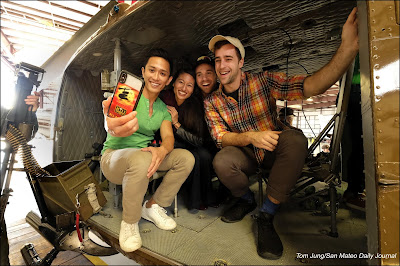 First Shot: Cast members were invited to climb aboard EMU 309, and once inside four actors, Joven Calloway, Jonelle Margallo, Brandon Block, and Michael Russell, spontaneously decided that a selfie was required to immortalize the event. As soon as I saw that Mr. Calloway had decorated his smartphone with the iconic Miss Saigon logo, I knew I had my shot.
Technical Note: This photo was made using a flash bounced off the wall behind me. The mixture of natural ambient and artificial light made for a strange color mix, and since I had a white(ish) wall behind me, I decided to use it. The setup wasn't perfect, as there was some fall-off on the subjects who were farthest from the door. 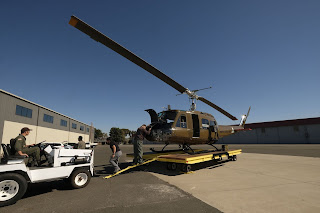 Preflight: After a while, the great bird was rolled out onto the field and prepared for takeoff. The ground crew began its meticulous preflight check, and in a few minutes, the cast members were allowed to board the helicopter. Due to the noise, everybody was issued hearing protection. One additional passenger was  Torque, EMU 309's K9 Mascot. Torque took his place by the door, and would be secured by a harness when in flight. He was obviously eager to join the cast, and quickly made friends with everybody. 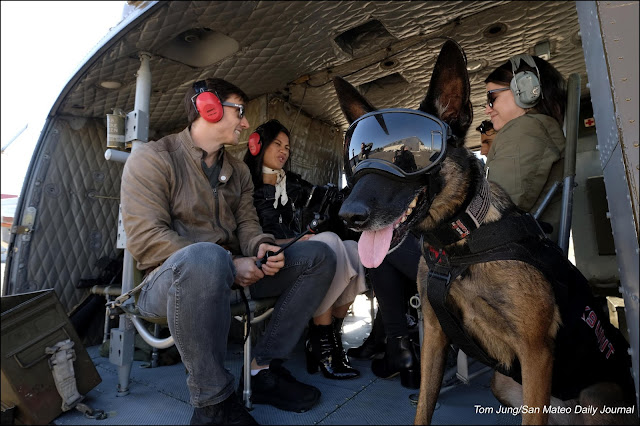 Torque is both a unit mascot and a reminder of the valuable service dogs played during the conflict, having served as scouts, trackers, sentries, and mine and booby trap detectors. 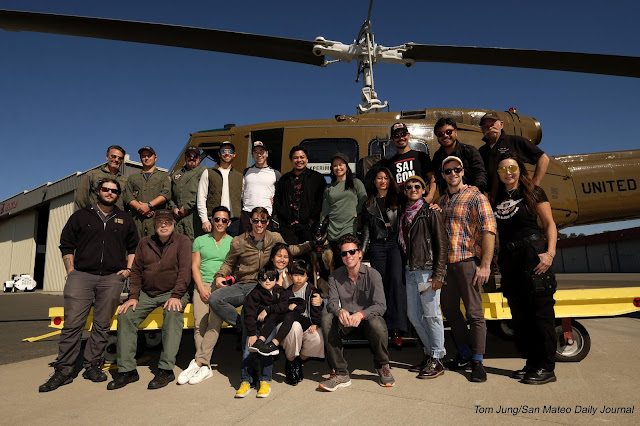 Final Shot: Just before the first flight took off, the cast and EMU crew members posed for a group shot. I waited until everybody else had made their own photos, and then proceeded to tighten up the group to make my shot. Again, flash was essential for bringing out the details that would otherwise be lost in shadows. Shots made under similar lighting circumstances without supplementary flash often suffer from highlight overexposure when the photographer attempts to improve shadow detail. A shoe-mounted flash, combined with the small amounts of existing ambient, added just enough detail without looking over-lit or unnatural. 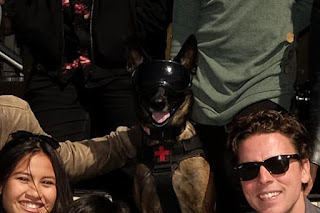 So Where's Torque? For me, the photo was a near miss because of Torque's position in the group photo. A black dog sitting in front of two cast members in dark clothing rendered him almost invisible. Doh!

Next time, I'll invite the two gentlemen in white to move to positions behind Torque so that he could be seen. And I'm sure I could have convinced Mr. Vest to remove it so that Torque could have his moment in the limelight! 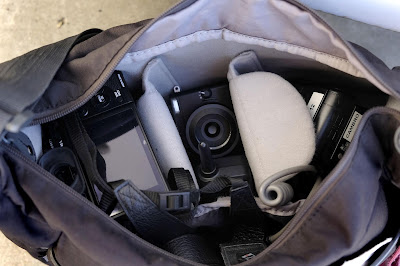 X-70 Backup: Ever since I installed a filter and fixed lens hood on my X-70, I feel totally comfortable letting it ride around inside my camera bag uncased. Easily accessible, it's ready to go in the event the sunlight gets totally out of hand and a flash supplemented exposure of 1/500 of a second or faster is required. Granted, I am sure to flinch if the filter is ever scratched (I went with a moderately expensive B&W UV), but the assurances that the front element of the lens being properly protected are worth the cost.