Bethlehem 2015: This was my third "Bethlehem", and the first one that I photographed under the constant threat of rain. It is also the third assignment where I decided to go mirrorless and use my Fuji kit. I also figured that the small size of the camera would make it easier to slip under my parka in case I got caught in a downpour.

With Cissie as my VAL (Voice Actuated Lightstand), I had much more flexibility in the actual placement of my light. But considering the close quarters we’d be working in, I had to take portability into consideration, in addition to keeping things as simple as possible. Instead of my usual monopod, I had decided to use a Canon Chest Pod that I bought used for a song. And while it gave me an extended length of 20 inches, its practical length was considerably longer when I had someone else to do the extending. If I needed to make a low angle shot with the camera at ground level, Cissie could get my light almost eight feet above my camera’s line of sight, a useful capability.

On camera bounce flash has always been a useful technique, and since I decided to use Fuji bodies, I would be forced to use my Fuji EF-42 if I was to have TTL capabilities. Normally I might resort to non-TTL automation on one of my Nikon speedlights, but this feature only works with relatively high output, low ISO combinations. Had I attempted to use an SB-800 in non-TTL mode, my minimum working aperture would be F8.0 when coupled with the ISO setting of 1600 I planned on using. TTL would be the only way I could handle working apertures of F 2.0, or lower. Besides this output limitation, I would be totally dependent on finding usable bounce surfaces on location, something you can’t always count on.

Having Cissie to run interference allowed me a second option. Lacking bounce surfaces, some sort of modified direct light would be needed. I decided to use an SB-800 with one of Gary Fong’s Light Sphere.As recommended, the wide angle diffusion panel was used for maximum spread. I also installed the factory CTO equivalent gel so that my light would match the high-intensity quartz lights used to illuminate the booths. And as a final touch, I covered the whole affair in a plastic bag, which added a tiny bit more diffusion, but primarily kept the whole thing dry. By leaving my white balance setting on daylight, everything lit by the flash would have a warm glow.

In these illustrations, you can see how I prepared the flash. Step #1 shows the installation of the Nikon gel, "tail" inserted into the flash head and the front held in place by the wide angle panel. Step #2 shows the head tilted to the vertical position. In this photo, it's actually inclined forward slightly to show the gel, held in place by the wide angle panel. The rubber band around the speedlight head is to improve traction for the "legs" of the Light Sphere. Gary Fong provides a special, limited edition, autographed rubber band just for the purpose when you purchase one of the Lightsphere Universals. Additional bands can be had, for a price. I'll keep my eye out for those purple rubber bands used to hold bunches of broccoli together, since they're free! And I like broccoli. Also, the ubiquitous Velcro strip many shooters install to facilitate attaching their Lumiquest accessories works well, too.


Once the gel is in place, you can attached the Light Sphere The unit, as pictured in Step #3, is ready to go.

Take a quick look at the "Cloud Dome", the giant opaque contact lens that covers the "mouth" of the Light Sphere. When the flash head point up, the dome should be installed so that the dome's curve is inside. This allows light to bounce off the inside surface of the dome and out through the Light Sphere. (Gary Fong has a name for everything!)

Triggering the speedlight was another problem. Had I brought a Nikon DSLR, I could have used a second, shoe-mounted SB-800 as a commander. Going with the Fuji forced me to find an alternative triggering method and way to determining proper exposure. I solved the triggering problem by using an inexpensive EBay radio trigger set, one where the receiver had a shoe on top to hold the flash, and a ¼ x 20 thread underneath. Compact (and fragile), it screwed into the Canon Chest Pod, giving me both the height and the connectivity I wanted. 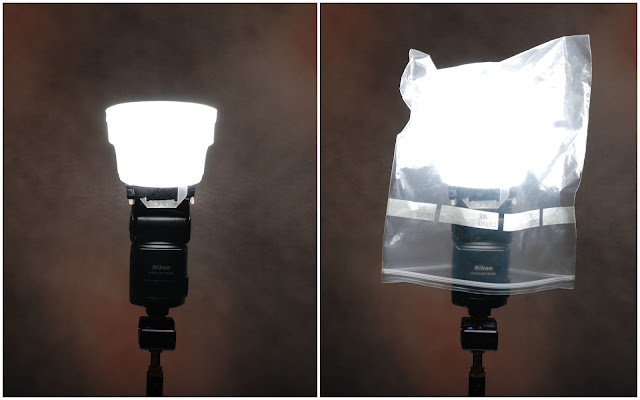 Here's the flash, triggered via radio transceiver, without, and with, the accessory secondary light modifier, a.k.a. baggie flash raincoat. (I actually used a bag large enough to completely cover the transceiver flash mount.) You can see that the flash area is nearly doubled by the bag. Incidentally, I may have gotten the idea from a post this David Hobby post where he used a much larger plastic bag on a coat hanger frame. 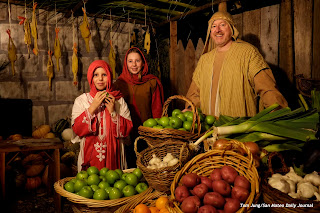 The great thing about this arrangement is the ease with which this little ball of light can be placed exactly where it is needed. In the opening shot (Photo #1), you can see that the light is coming from high camera left. The shadows are distinct but not overly hard-edged. The flash to subject distance is long enough to give an even exposure for the foreground fruits and vegetables and the shopkeepers in the rear.
As I mentioned, this arrangement forced me to forego TTL exposure control. Instead, I adjusted the flash output for proper exposure at F 2.0 at a distance of 5 feet at 1/32 power and an ISO of 1600. Cissie and and devised a simple working code:
There is one important advantage to working this way. So long as my instructions were clear, I could count on the flash to subject distance being constant, along with the exposure. Side lighting usually offers a challenge to TTL flash exposure because the system tries to reconcile exposure for the facial highlights with exposure for the deep shadows. The result is often a compromise requiring some sort of in-flash or in-camera exposure compensation.
Harod's Nose: Here I had Cissie align herself on King Harod nose (Photo #2). You can see that the plane of his face is not overexposed, and that his back was simply allowed to go dark. The blue searchlights in the background, while a little hokey, did help make this image a favorite of nearly everyone who saw it.
This shot of a carpenter (Photo #3) was meant to be used as a filler, just in case there was room. Nothing special, but looking back, I wished I had made a shot from a low angle with the wood shavings in focus and the carpenter's face out of focus. Oh well...
This is Cissie's favorite (Photo #4). A complete grab shot, I'd have submitted it if there was more context in the background. However, it's low rating on the Happy Scale make that a moot point.
This last shot is an also ran (Photo #5). Everything, the bag, the radio transmitter, and the Light Sphere / Cloud Dome combination, worked properly. No happy factor, but the only shot where the rain makes an appearance. Unfortunately, the young man on the left, clear and sharp, pulls the viewer's attention away from the Roman Soldier, the real subject in my opinion. And when the quality is compared to the previous shot, it really looks more like a loser than a winner.

I missed the faster focusing performance of the DSLR, but wanted to use my fastest glass for what was really a night shoot. My kit contained two bodies with a 35mm 1.4 and an 18mm 2.0. And I like the images that the Fujis make. It may be my imagination, but they seem to perform better at the higher ISO settings than my Nikons. It was a simple matter of fumbling in my bag to get the lens I wanted, but I still felt hampered by the overall slowness of the Fuji. 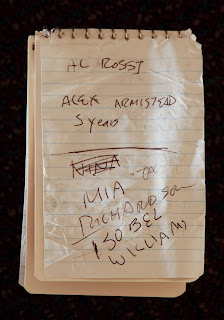 This shoot was as much about lighting as it was about the cameras. The bag covered flash, by all accounts, was a success. The radio transmitters did a good enough job, which is to say that I didn't have to resort to the backup transmitter/receiver kit I carried as a spare. Keeping the entire rig under a plastic bag was inspired, to say the least. Shooting a posed group using a CTO gelled speedlight placed up high was a piece of cake. But there was the rain, and my notebook got thoroughly soaked just writing down my subject's names. That's another problem, with another solution. But this dried out notebook may see action again, unless I can find an easier way to work in the rain.
My final assignment of 2015 was also shot with my Fujis. This time I attempted to juggle three bodies, a messenger bag, and a windbreaker while photographing in the presence of some very large, albeit very gentle, horses from Odyssio.
Posted by Tom Jung Photography at 12:10 PM No comments: Links to this post