When working at night outdoors, we expect the shadows to be sharp and contrasty, since our minds can easily imagine the effect a streetlight might have on our subject. Hard light is not only acceptable, I dare say it's expected. 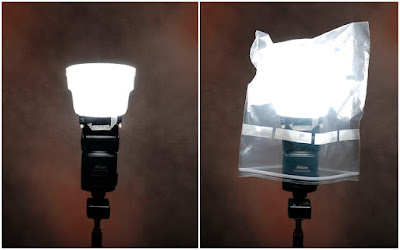 The forecast called for showers, so I prepared my monopod-mounted Gary Fong Light Sphere by adding a plastic bag raincoat and utilizing an inexpensive radio trigger purchased on eBay. Some more information on that project can be found here.

Calibration: That's an uptown way of saying "What Aperture at What Distance?" Keeping things simple, I put the strobe/dome assembly on a camera, stood 5' from a non-reflective subject, set the flash output to quarter power, set the shutter speed to the highest flash sync setting, set the ISO to 800, and made photographs, changing the aperture until I liked the results. As it turned out, the best aperture was 5.6. I repeated the operation with the flash at half power at a distance of seven feet, and again got my best results at 5.6. I re-checked my settings outside and got the same results.

I wrote the two distance/output combinations on some masking tape and attached it to the Dome so Cissie could read them (Photo #2). Her job on this assignment was relatively simple - position the dome 5' from my subject when the flash was set to quarter power, and when necessary, boost the power to half and the distance to seven feet. This worked out well, since Cissie could actually stand behind me and move the light the desired distance by reaching out with the monopod.

I had no illusions about the Dome's ability to "soften" the light. Frankly, when the Dome is used outdoors, it doesn't improve the shadow edges at all. I use the dome for its ability to create a "ball" of light that doesn't have to be pointed. Yes, I lose a lot of light, but now I don't have to worry about pointing the flash in the wrong direction - light goes everywhere, and at pretty much the same intensity.

Dragging Shutter:  I had to photograph these people wearing Christmas light necklaces. This first photo was made without the flash (Photo #3). You can see that the color from lights are very saturated. Adding the flash would bring the foreground into proper exposure, but some of the saturation was going to be lost. Not much you can do about that, but at least we maintained some of the intensity of the greens, reds, and blues.

For this night shot, the lack of detail in the shadows if expected, along with the relatively high position of the Dome. Having a streetlight in the background was very helpful in establishing the contrasty nature of the lighting, making the image entirely believable. It doesn't shout "flash".

You can see that when the flash is added, we get a believable image that allows most of the Christmas lights to be rendered with reasonable accuracy (Photo #4). It just so happens that Cissie was standing to my left, holding the Light Sphere high enough to render shadows similar to those you'd get from a streetlight.

The streetlight in the background was included to help the viewer connect to the high overhead placement of the existing lights. It something of a testament to the effectiveness of the Fuji 10-24mm lens' internal anti-reflective treatment. The lack of ghost reflections (disks of light) is a welcomed feature in any lens, especially in one that I use so frequently.

Equipment Choices: All of these shots were made with Fujis, and I carried three that evening:
I didn't realize how confusing it would be to mix the X-E1 with the X-Ts. Whenever I kept getting the eye position wrong. First, I'd get used to the left-mounted viewfinder of the X-E1, then fumble when looking for the center-mounted finder in the X-Ts. In the future, I will mount the wide zoom on the X-T2, and any longer lens (my 35mm or 56mm) on my T1. I my just throw in my Nikon Coolpix A for the relatively rare occasion when I need to synchronize a speedlight to compensate for high ambient conditions.

The Ball O' Light on the end of a "stick" allows me to change cameras by just moving the transmitter from one hot shoe to another, which I did here. This tighter shot was with a 56mm 1.2 mounted on a T1 body. Eye level view helped me get a reasonably composed, tight composition, although the folding chair at camera left didn't help any. I could have justified the odd composition because of the context  added by the Star Wars' BB-8 costume (Photo #5).

Just a reminder: If you use multiple lens/body combinations in the field, you might want to set all of your manual adjustments (exposure time, aperture, and ISO) to the same settings. Fewer things to think about, especially when things start to get hectic.


The movable  "Ball of Light" provided by the Cloud Dome offers many advantages. If we look at the image (Photo #6), we can see that the dominant accent light is coming from behind my subject. If you look at the shadows cast by the chairs and the two spectators in the background, you can get a pretty good idea of where the light is coming from. My flash, coming from high camera left, gives me the modeling on my subjects face. Another interesting side effect is the exposure of the woman on at camera right. While she is closer to me than my main subject, the flash to subject distance is very close to that of the the flash to my dressed-in-white Stormtrooper. The distance was so similar that only a minimum of burning was required to equalized the exposures.
Right Lens, Wrong Body:  I ultimately submitted to lead photo (Photo #1) for possible publication in spite of the too-tight cropping at the top edge. My choice of the X-E1 / 10-24 lens combination was a mistake, because the body does not have a rotating LCD panel. This made low-angle shots a hit-or-miss affair, as I wasn't about to lie down in the mud to make the shot. Photo #7 has a slightly better composition, but no engaging expression on my main subject's face.  Had I used the X-T1 or T-2 body instead, I could have composed the image with the LCD panel rotated for waist-level viewing. This one one mistake I will NOT make again!

Parting Shot: Just as I finished packing my gear, I met Ben and his new friend Santa (Photo #8). I wanted a shot,but didn't have the time to re-assemble my Light Sphere. So I just grabbed a domed SB-80, mounted it, and made a quick trial shot. There would have been time for a better exposed follow-up shot, but as luck would have it, it wasn't needed. Since the exposure was "close enough" and the smile tremendous, I called it a wrap.