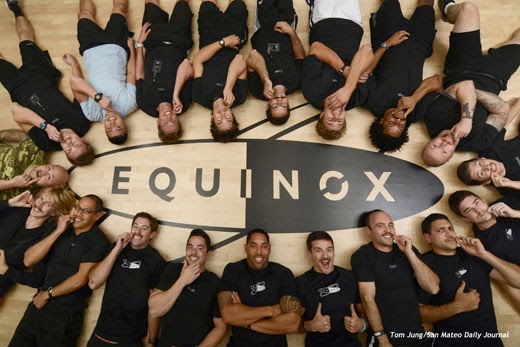 I received an assignment to make a photograph about Movember, a men's health awareness event sponsored by a local gym. For the month of November, participants grow their mustaches to show their participation in the program. She told me that there was a gym logo on the floor of one of the workout rooms, which I interpreted to be a suggestion to use the logo if humanly possible.

The gym was a five minute drive from my office, so I scheduled a preview session the day before the scheduled shoot. This would give me a chance to meet the right people and check out this logo. I learned two things: the logo was about nine feet across and that there would be about 15 heads to work with. I decided that the floor shot with a straight-down perspective would do the trick. I spoke with David, my lead contact on the ground, and he liked the idea.

To get the shot, I needed to get the camera as high up as possible. David offered a ladder, but if I used it, its shadow might be cast on the subjects below. I solved the problem by mounting the camera on a monopod (essentially a five-foot long single tripod leg) angled at 45 degrees to the lens axis. I tripped the shutter using a Calumet Wireless Trigger. While I normally use it to fire my flashes, the unit will act as a remote shutter release with the appropriate cable. The Nikon kit comes with two cables: a D300 and one for the D90/D80 and the D70s. I purchased the D7000 cable to complete the set. I wrote the appropriate camera model directly on the cable (below, left) using a Sharpie Paint Marker. The cable was inserted into the port at the back of the Calumet receiver (below, right).

The kit includes 3 cables: N6 (Nikon D70s and D80); D8 (D300/s, D700, and Pro Level Bodies); and N10 D90, D7000, P7700). A more complete listing is available on the on-line Calumet Catalog. Warning: Not every Nikon can accept an external shutter release. Most of these can use the Nikon ML-L3 Infrared Release, but those are line-of-sight transmitters better adapted to making selfies, since the camera's sensor is normally found on the front of the camera, facing forward.

When everything was ready, I straddled one of the subjects and I held the camera aloft, directly above the logo, and made my shots. During the post processing, I made some minor adjustments to correct a very slight perspective problem.

Now For The Hard Part: Now I had to get the names of my subjects. Since most of them had somewhere else to be, I relied on David to provide the names. Because he wouldn't be returning to the Gym, I had to send him an e-mail with the image attached. To simplify the image, I removed the color from everything except the faces. 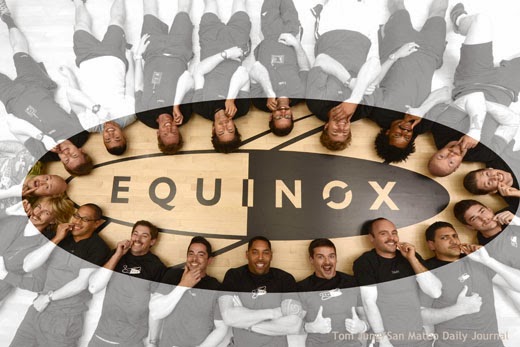 Next, I numbered all of the subjects. This way there could be no doubt about I used the Text Took making a layer for each number. When I was done, I flattened the image and converted it back to a JPG file. The "Not For Publication" is standard notation for me, since I won't release  a photo until after publication. There is no doubt that this photo is simply a working preview. I got an immediate response, so the photo was sent to the Journal's queue. 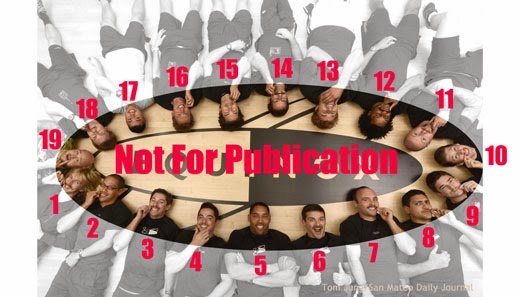 Kinda fun. The participants were pretty jazzed when I showed them how it turned out.
Posted by Tom Jung Photography at 12:00 PM No comments: