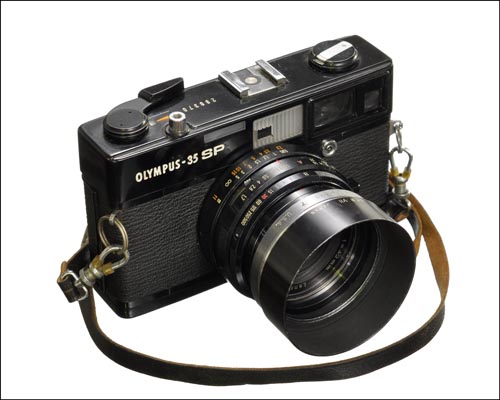 Olympian Adventure: The first camera I bought with my very own money was an Olympus 35 SP. I bring this up primarily because in 2011 I will have owned the little beast for 40 years, something a bit quaint in this age of planned obsolescence. As with all cameras of the time, it had more in common with a watch than a computer. For those who wish to know more about the camera, click here for more information.
The camera had some significant limitations when compared to today's digital wonders:
For more than a year this camera was my constant companion. As was the custom of the time, I did most of my photography in the street, always trying to capture that fleeting slice of life that would serve as biting commentary on the social condition for years to come. Alas, that was not to be. But that year of photography taught me some lessons that we would all do well to learn.

Previsualize The Image. I learned to previsualize the finished photograph before I brought the camera into play, I looked directly at my intended subject. Next, I quickly glanced to see if anything in the background would distract from the main subject.

Make Your Adjustments Before Raising The Camera. I made it a point to select my aperture/shutter combination before bringing the camera to bear. I usually select the aperture first, since it will have the greatest impact on the appearance of the finished photograph. Today, I make it point to choose the smallest aperture (yielding the shallowest depth of field) I can get away with.

Bring The Camera To Your Face. Finally, and most importantly, I would bring the camera up to my face without losing sight of the subject. When doing this, I was quite sure that the image I would capture would be exactly what I had seen the moment before.  The built-in viewfinder window on the Olympus made it easy.

Compose and Crop In The Viewfinder. Be sure that all of the visual elements are in position before you release the shutter. While you can re-compose and crop in post production, you will find that the more drastic the crop, the more detail you will lose.

I know it would be difficult for me to return to the mechanical, film-based, analog world of the 1970's. But overcoming the limitations of my equipment back then made me a better photographer today. I continue to remind myself that planning my shots is as important today as it was then, although the consequences of a miscalculation are less severe than they used to be.
Posted by Tom Jung Photography at 12:10 AM No comments: