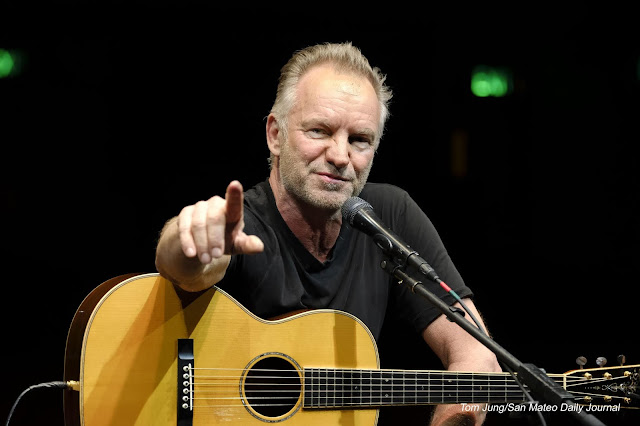 Music And Lyrics By Sting: A  special press event was scheduled by SHN San Francisco to publicize the addition of "The Last Ship", with lyrics and music by Sting, into the February 2020 lineup. We were told there would be a surprise "guest" singing at the event, although there had been some speculation that Sting himself would be present. His starring role in the musical was not made public until the day of the press briefing.

Sting's easy, folksy style was a good match for songs lamenting the decline of the ship building industry in northeast England in the 1980's. During an interview for KGO television, he asserted that this was a story about the fracturing of the social contract, and the proper role of government in the lives of workers. The sincerity of his beliefs was clearly evident in the lyrics of the songs, warning of the social consequences of having the foundations of a working class lifestyle begin to crumble from beneath. 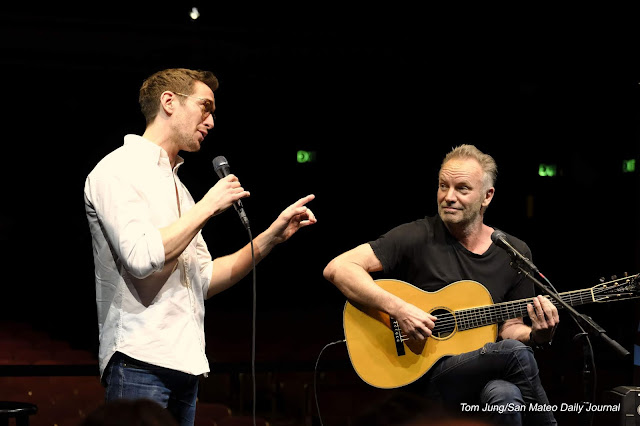 I was asked to submit two variations on the Sting photo. The first was for a future article that might need an appropriate head shot. My first/best choice was the image at the top of the post, with my second, third, and fourth choices in the three-paneled composite beneath it. The second shot, a "Page Two", would be a photo that could stand on its own with a three sentence caption. This shot shows singer Oliver Sevale performing a duet with Sting, which provides more visual context than my preferred head shot. 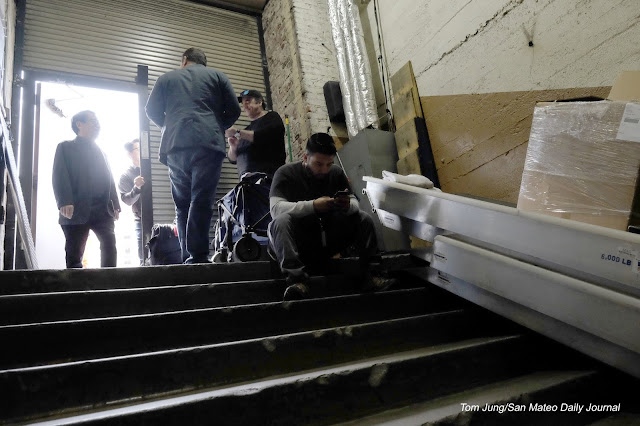 How Sausage Is Made: Sometimes these theatrical pre-events are much less glamorous than the performers we're sent to photograph. In the case of the Golden Gate Theater, located in the gritty Tenderloin neighborhood in San Francisco, it can be a little dicey, so I wanted to get my equipment and myself off the street as quickly as possible.


I arrived about 30 minutes before the event was officially scheduled to start. This was an advantage because the security staff immediately allowed me in when I said I was told to "check in" when I arrived, which  is true. This is the stairway leading from the street level Stage Entrance down to the stage level, as dark and drear as any place I've been asked to photograph. 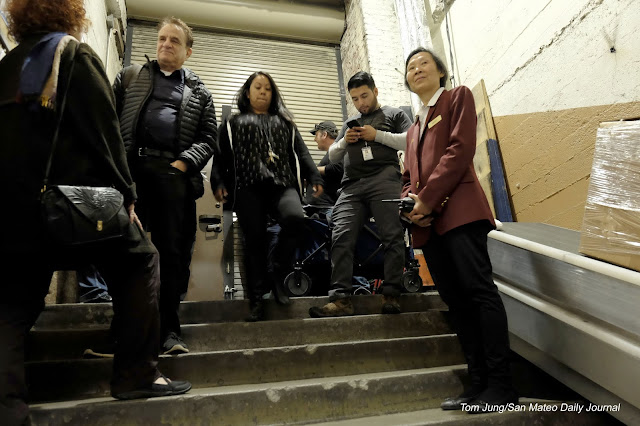 Slowly but surely, additional media teams arrive, and the stairway started to get a little crowded. At the appointed time, the video crews were allowed to set up first in the designated area behind three rows of chairs reserved for print media and SHNSF's VIP guests. We filed in slowly, taking our seats or positions where we thought the viewing would be best.

The performance area was prepared on the stage, with the performers facing the background and the photographers facing the audience. There was barely enough room for the chairs and the video tripods behind them, but somehow we all managed to squeeze into the allotted space. 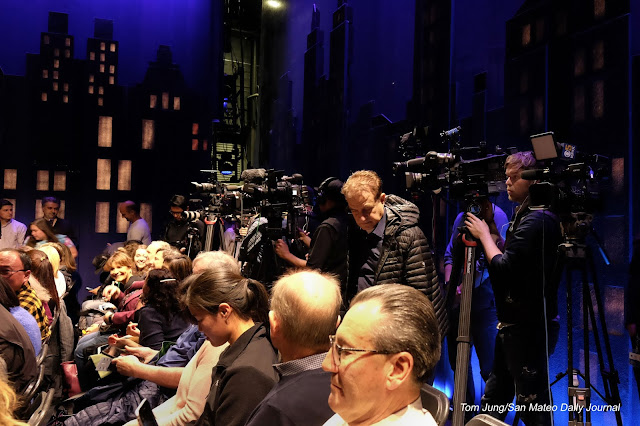 The allotted space consisted of the stage itself. The media were positioned with in front of the background, facing the audience. The three rows of seats in front of the media riser were soon filled, but I managed to work my way forward in an effort to grab a view of the audience, as my Editor wanted to include some "ambiance" photos in case they were needed. I didn't stay long because I didn't want to lose my spot in the media area. 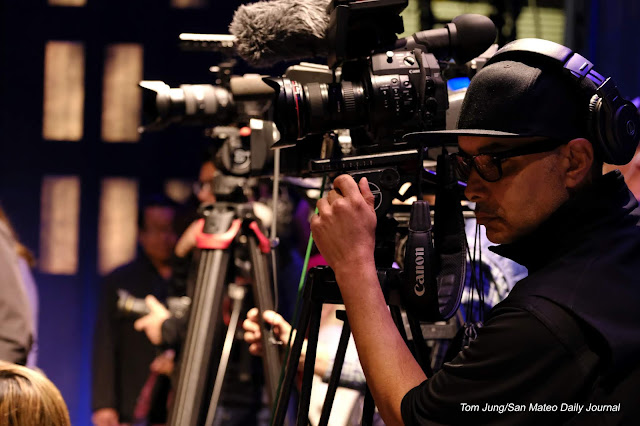 This videographer makes some final adjustments on his camera. As I mentioned, video crews were allowed to set up before the rest of us were allowed to enter. I positioned myself at the leftmost edge of the video group since videographers invariably pick the best vantage points. 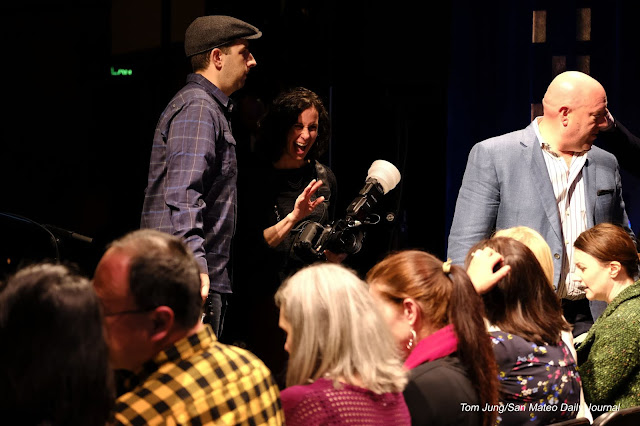 I caught an event photographer talking with audience members just before the show began. She may have been a member of Altizier's Army, judging from the ubiquitous Gary Fong Light Sphere mounted on a Canon DSLR. 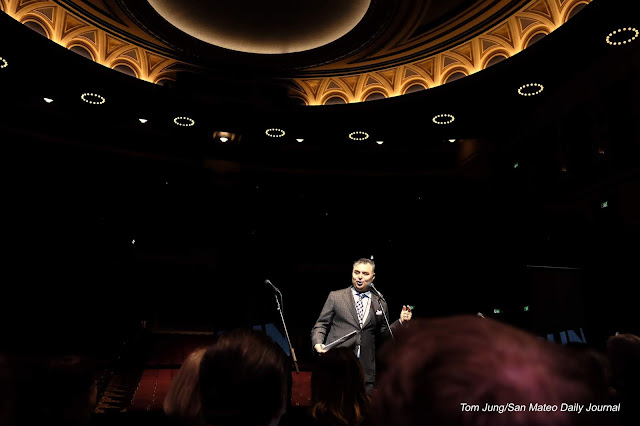 The theater's ceiling fixtures could have made in interesting composition if I magically cleared the room, moved closer to the main subject, and adjusted the composition to best advantage. Alas, the tight quarters made that impossible to achieve a composition more creative than this one. Oh well, file this one away for future reference. 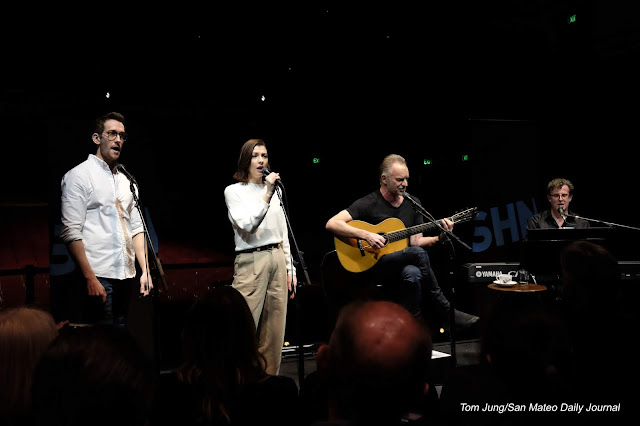 The cast consisted of the two major singer/actors, Sting himself, and a keyboardist. A variety of songs were performed, and the audience went away with a clear understanding of the message hiding just beneath the beautifully crafted songs. Normally, I am unaware of what is being said, or sung, choosing instead to concentrate on any facial tells that might warn me of a change of expression or a dramatic gesture. This time I heard and internalized every heart-felt word.
Posted by Tom Jung Photography at 12:10 PM No comments: Links to this post