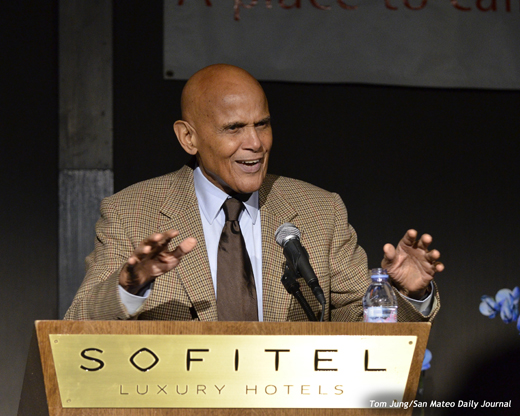 ...Everything looks like a nail." This bit of wisdom came from none other than David "The Strobist" Hobby, probably the most followed blogger in the solar system when it comes to learning about the "proper" application of speed lights. He has two new instruction DVD sets, "Lighting In Layers", and the "Flash Bus Tour", which was co-presented by Joe McNally, a rock star of a photographer. Nikon users will love the Flash Bus set, simply because it's fun to watch McNally work, on the fly, using iTTL automated flash. Enough groveling.

The real significance of Hobby's quote is this: Just because you have it, it doesn't mean you have to use it. To put it more specifically, just because there's a speed light in your bag, it doesn't mean you have to use it every time you make a photo. Granted, I usually carry 3 whenever I'm in the field, but for many people this is overkill. Come to think of it, there are photographers that consider a single speed light excessive. But it you were to look at my posts, you'll conclude I'm a "flash fetishist". So before you too go down the road to ruin, stop and think about why you're using flash in the first place.

I am photographing a Luncheon for HIP Housing, and the keynote speaker was singer, actor, and social activist Harry Belafonte. Because I was on a tight schedule, I checked with the event planner and found that I could photograph Belafonte during the "meet and greet"/book signing from 11:00 to 12:00 noon, and during his scheduled speech from 12:30 to 1:00 pm. Since I had to leave at 12:45 to meet a 1:00 appointment, I would have only 15 minutes of "lens time" while he spoke.

First, I did some shots during the book signing, and for the most part, got some pretty ordinary "smile for the camera" shots. I did submit one to the editor, since people generally like to have their photos in the newspaper, especially when their standing next to a celebrity. Bounce flash, nothing fancy. 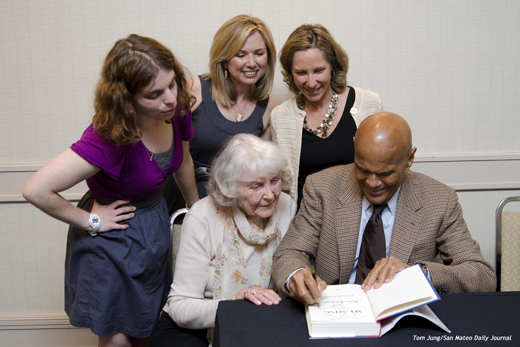 The photo pretty much follows all of the basic rules of composition.  However, it lacks sparkle. With everybody looking at the book, you really can see anyone's eyes. And how could you tell if it was actually Harry Belafonte? Well, at least I had a shot.

I then moved into the dining room, and while the guest were eating, I walked around the room, looking for a vantage point. I found a spot where I could photograph from a low position and not interfere with anybody's view of the speakers. I decided to return to the back wall and determine whether I would use flash while I shot. When the first speaker took the stage, I turned on the flash and made a shot. 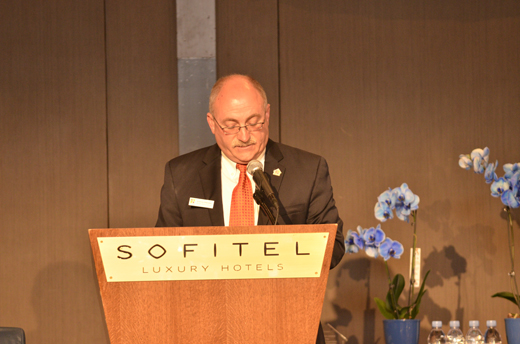 Yikes! This was horrible! What had gone wrong? The white balance was set to the Flash preset, but the color was a strange blend, halfway between incandescent and flash. At that point I realized that the ambient light was of an intensity nearly equal to the light from my bounced flash. Since I was already set to 1/200 at 3.5, ISO 1600, I couldn't reduce the effect of the ambient that much, since my top flash shutter speed was 1/250, only a 1/3 stop decrease. So I decided to turn off the flash, set the white balance to the Incandescent preset, and try again. 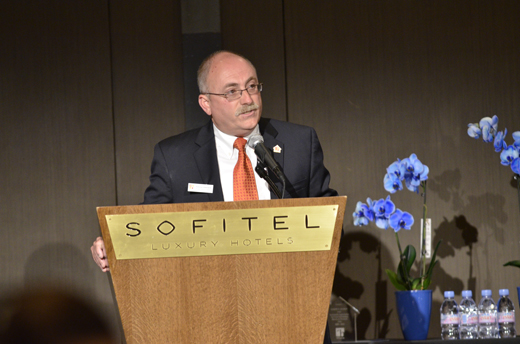 Much better! It was now that I noticed that four high-wattage spotlights were cross-lighting the podium, giving more than enough light to properly expose the subject. When Belafonte stepped to the podium, I walked forward to my shooting position and began making photographs. 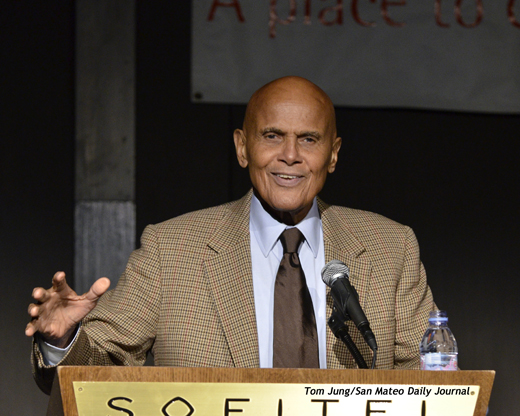 I preferred this shot but the editor selected the one at the top, perhaps because of the more expressive hands. Interestingly enough, the paper ran both shots, and the pair in their side-by-side positions, spanned four full column widths.

Note to myself: Don't become a slave to any given technique. Not everything is a nail, you know.
Posted by Tom Jung Photography at 12:10 PM No comments: