Cropping: You Never Can Tell 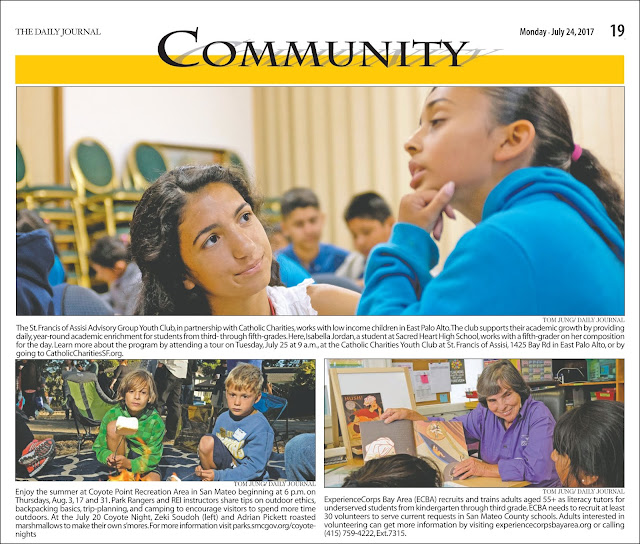 When I submit a photo for publication, I always try to leave space on the left and right side so the editor has some freedom to crop the image to fit the available space. In addition, I always try to include enough foreground and background to give the viewer a sense of depth, an important quality in a successful photo. It's the obviously the editor's prerogative to decide what details are important and how much to include.

Three of my photos ran in the July 24 edition of the Journal. All were time sensitive, and they all made it "under the wire". However, I was a little surprised in manner they were cropped, although other factors may have been at play.

Photo #1: Volunteers At Catholic Charities:  My volunteer is kneeling to help a fifth-grader with her essay of the day. I wanted to get some eye contact between the two, but they never looked at each other. staring instead at the blank paper between them. Keep shooting, I told myself, since something would eventually happen if I was patient, and attentive. For the record, more than a dozen photos were made from this exact vantage point, this being the best of the lot.


The Crop: If you see how the photo was published, you can see that the two faces became the most important aspect of the image. It illustrates the interaction well, but the cropping was pretty severe. I think the image loses something without the hint of a student desk and the blue binder.

Photo #2: Volunteer Tutors: This shot didn't require as many shots as the first, since it was relatively easy to wait for my reader to make eye contact with her two students, which did NOT have photo releases on file. Flash bounce from an umbrella was used to light the subject.

The Crop: The cropping chosen by my editor includes all of the important details, but seems a little cramped, lacking a sense of depth. Granted, the details lost weren't really essential to the back story, but the lack of a visual front-to-back transition makes the image look a little flat, or worse, like you're viewing the image through a letterbox.

Photo #3: Roasting Marshmallows At Coyote Point: You can see that the uncropped photo had much more context that the published version. While I could have directed my subjects a little more (Since this wasn't "hard news", I adopt a looser interpretation of the photographer's "Prime Directive" to not influence the outcome of the image, or to physically alter any aspect of the environment. While I expect my right most subject is looking at his marshmallow, he looks like he's concentration on something else. I think the fire was a nice touch, which was lost in the extreme cropping of the image.

The Crop: With the tight cropping you lose the context provided by the fire in the foreground. It's much harder to tell that my subjects are toasting marshmallows outdoors, which was the reason I was sent to make the photo in the first place. Without the fire, it looks like my leftmost subject is levitating a rather large block of tofu.

In spite of the outcome, I was glad that all three images ran. There were all pre-event photos, and all succeeded in their primary purpose of announcing an upcoming event. To that extent, all three were now properly announced, even though the cropping might not have been to my taste.
Posted by Tom Jung Photography at 12:10 PM No comments: Links to this post

Helipad-Flash On A Bright Cloudy Day

The "grand opening" of the helipad at a local hospital (Photo #1) became transcendental due to some very photogenic clouds and a colorful airborne ambulance disguised as a helicopter. The cloudy-bright conditions allowed for a diffused but direct light source yielding relatively sharp-edged shadows. The clouds also provided some natural reflected fill light for my subjects. This results in a quality of light very different from heavy overcast or open shade situations, and yields more saturated colors. Photographic Slam Dunk!

In spite of all this lighting goodness, flash can, and did, play a supporting role in my lighting solution. If you look closely, you can see the shadow of the helicopter on the landing pad, so my three subjects could benefit from some additional light. While there was some fill light bouncing off of the clouds, it wasn't enough to provide detail without increasing my exposure to favor my shaded subjects. But had I done that, I would have blown out (overexposed) the blue sky/wispy cloud background.
In this cropped portion (Photo #2), you can see the shadow (arrow) cast by the speedlight I aimed into the patient compartment of the helicopter. Shadow notwithstanding, the addition of the flash gave me plenty of subject detail without compromising my cloud-friendly exposure settings.
Photo #3 is also a flash enhanced shot. I wanted a little more detail on the Mayor's face, so I narrowed the beam angle of my speedlight and aimed it directly at him. His face is well lit in spite of the "high noon" light coming directly from above.

You can see in this tightly cropped image (Photo #4) that the speedlights do leave reflections in your subjects. It might have been possible to minimize these hot spots by re-positioning my flash, something that would have required either a light stand or a cooperative bystander. Since I had neither, I held the speedlight at arm's length over my head, pointed it directly at the Mayor's face, and viewed my shot in the electronic viewfinder of my Fuji T2. If I didn't like the results, I made another shot without removing the camera from my eye.

Let me add a few words of caution. First, the cloud cover, acting as a diffuser, effectively reduced the sun's output by a full stop. This allowed me to select a flash-friendly exposure time of 1/250 of a second and an aperture of F 13. The speedlight doesn't have much juice when fired at that distance, but you don't need much, since its output is added to the light already filling the shadows. The trick is to not blow out the highlights, which almost happened in this shot.

Somebody couldn't resist reliving the moment when Arnold Schwarzenegger hung from a helicopter in "True Lies" (Photo #5)  I was the one to suggest that our hero raise his right arm so we could see his face.

Helicopters and fire engines - Two of my favorite things!
Posted by Tom Jung Photography at 12:10 PM No comments: Links to this post 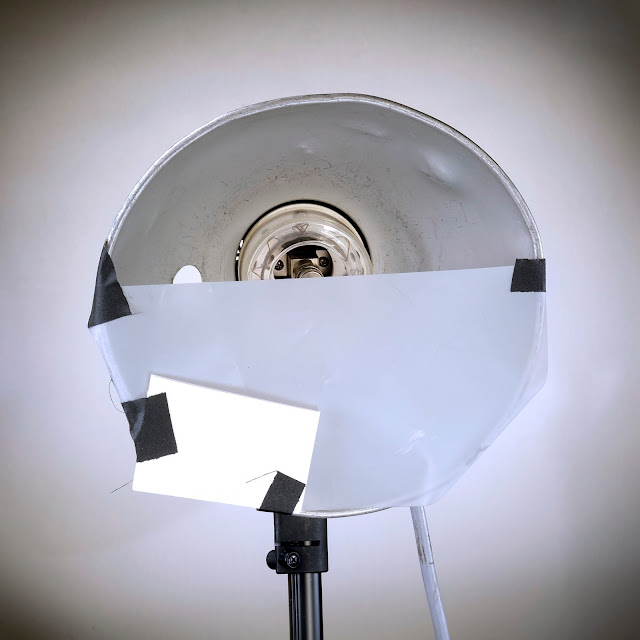 This is a photograph of the reflector and head of one of my Norman 800 WS flash units. The patch-together look is the result of some Rosco Soft Frost, and a scrap of mount board held in place with some pieces of Gaffer Tape. Ugly as it is, this adaptation solved a serious problem - Exposure variations when large groups are photographed in depth, such as this group of students forming a heart using their red-shirted bodies. Let's cut to the chase and view the final result. 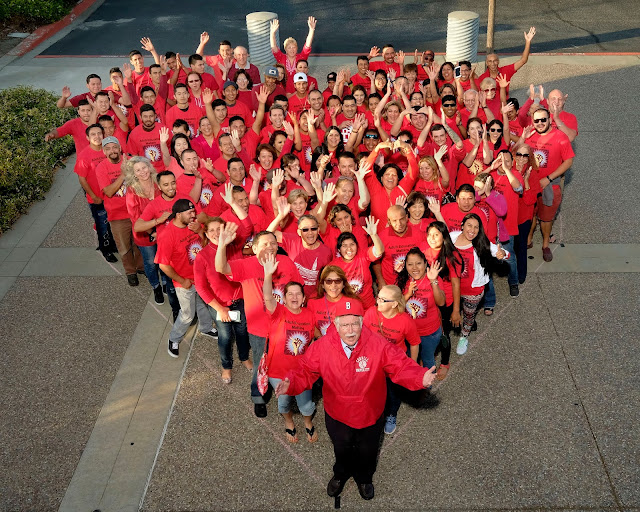 For the moment, please ignore the fact that small shafts of afternoon sunlight is highlighting certain students. Beyond that, very VERY little post production was used to balance the exposure from the front to the back of the arrangement. Our retiring Director, standing at the heart's apex, received the same amount of light as those in the  very back row. My solution may not be mathematically precise, but the even front-to-back exposure speaks for itself.

The Mechanics: I standing on a walkway about 12 feet above the ground. The Norman 800 head is on a stand another six feet higher. It's pretty obvious that the Big Guy in front is much closer to the flash than those in the wayback. When I did the math, I was surprised by just how large the difference was.

Sometimes Math Comes In Handy. For those math doubters, Pythagoras got it right. Using the height of the flash above the ground and the distance of my subjects from the wall, I calculated the flash-to-subject distances for specific taped markers on the concrete inside my chalked heart. 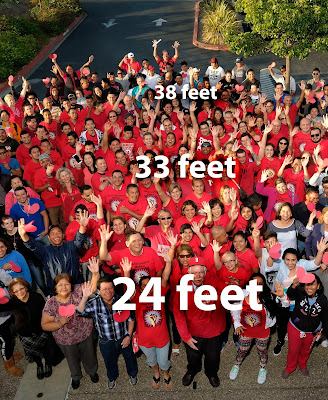 Once I started filling in the heart, the tape was covered by my subject's feet. When seen from above, you get a feeling for the actual distances, and can now predict how much the light would fall-off  from front to back.

Photographing so large a group is often precision guesswork, and from the calculated distances I concluded that if I exposed for the apex (subject closest to me), the middle will be underexposed by one stop, and the most distant by two stops.

Let's put it another way: If I set my exposure for the most distance subjects (38 feet), the middle subjects (33 feet) would be over-exposed by one stop, and the front-most (24 feet) by two stops.

With this in mind, I believed that if I could cut the effective flash output using a one-stop diffuser and position its upper edge at the half way point of the reflector, I could halve the amount of light hitting the closer subjects. And if I could cover the lowest portion of the diffused reflector, I could reduce the output still further. 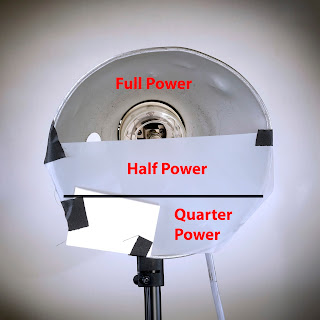 In this illustration you can see the effect I was trying to achieve with the Soft Frost and that small piece of mounting board. By tilting the flash head up slightly, I was able to get a full dose of light coming from the top half for my most distant subjects and  diminishing output for my subjects standing closer to the camera.

Not this is by no means a "speedlight" trick, and presupposes that one has access to a powerful flash with a well-shaped reflector bowl. If I had a 1600 WS unit instead of one with only 800, I probably could have reduced the shooting aperture by a stop and reduced the overexposure resulting from those stray bits of sunlight dappling my subjects. But 800 is what I had and what I used, and I was pleased with the results.
Posted by Tom Jung Photography at 12:10 PM No comments: Links to this post