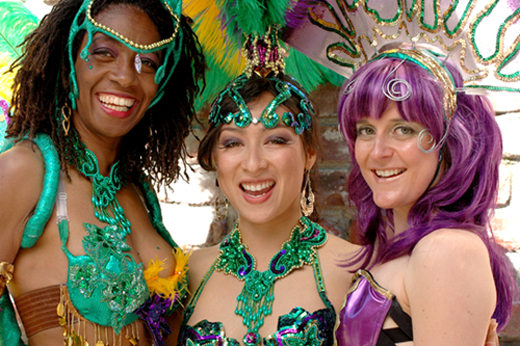 It’s the morning after Carnival and while I still have a grin on my face, this is as close to Mardi Gras as I care to come. I normally make hundreds of photographs in the four hours I usually spend there.

Things were different this time. I was trying to refine some simple lighting techniques that could be used in the field with very little fuss. My basic rule is to bring no more equipment than one can carry without constantly bumping into fellow attendees. This was apparently not a universal rule among photographers, since the prize for “under-dressed and over-equipped photographer” went to a young man with a huge rolling equipment bag, a light stand tucked under his arm and a camera around his neck.

The ambient light was direct morning and mid-day sunshine that resulted in deep, harsh shadows. When I photographed these three young ladies, they were standing/squinting in direct sunlight, and I knew that the shadows would darken their eyes in a most unflattering way. Other photographers around me were shooting with the light just the way it was, and although I saw many cameras equipped with accessory flashes, I don’t remember any of them going off. Admittedly, synchronized flash under these conditions would have been problematic due to the lower synchronization speeds of all of the digital SLRs on the market. The subject-to-camera distance made High Speed Focal Plane Synchronization impractical.

The solution to the current Header Shot was relatively simple. I carried a David Ziser Zumbrella with me, mounted on a standard umbrella bracket atop a carbon fiber monopod. The Zumbrella has fabric that is more translucent than most shoot-through umbrellas, allowing more light to pass through it.

To get the shot, I opened the Zumbrella and angled it up slightly. With the foot of the monopod resting on my waist, I positioned the Zumbrella's shadow so it “covered” all three subjects. The light was reduced by approximately one f-stop, but the diffusion created by the Zumbrella beautifully softened the light, a very worthwhile tradeoff. Three shots later, it was all over.

Just to be clear: This shot is not going to win anybody a Pulitzer. It serves primarily as an example of using a light modifier in a different way. The resulting light is even and soft. And if you're wondering why I didn't try for a more interesting lighting angle, I was working within a very small footprint, hence the monopod resting on my hip rather than angled to the side. Also, directing the subjects with all the noise and distractions was out of the question. Things would have been different if I had an assistant.

Happy Birthday!
Getting people to pay attention and smile at the same time can be a challenge. I subscribe to Joe MacNally’s belief that when photographing a group, you have to be assertive if you want the subject to look engaged, so getting their attention is critically important. I often say “Smile like you really like me” with small groups. But in larger group settings I’ve taken to having my subjects say “Happy Birthday”, which is pretty universial and gets everybody’s attention. You may have to do it a few times to get the rhythm, but it has worked well for me, so far.