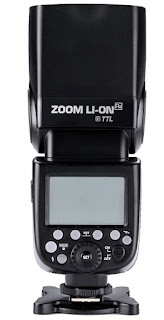 Vocabulary Is Funny: Adorama describes this product by what it is, whereas Nikon describes their products by what they do. This is the Adorama "transmitter". If it were made by Nikon, it would be called a "commander". Much more accurate and much less contentious than the "master' and "slave" terminology I used, without thinking, back in the '80s.

I stated in an earlier post that you might consider the AA Adorama AA-powered flash as your first primary flash, and later consider purchasing a second, Lithium-Ion unit as your new primary and your first flash as your backup. But having these two flashes offers another possibility: You can program one flash to serve as the Commander and the other as the Remote.

This posting will give some details for using one Adorama/Godox flash to control another one. Both flashes must have the same group and channel assignment. 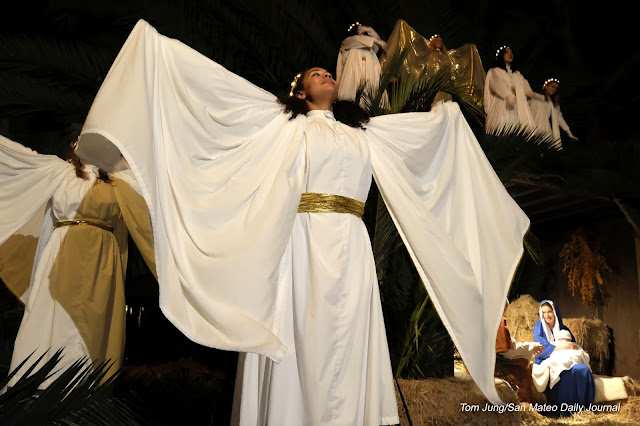 When Radio Shines: I knew this would be a tricky shot to set up. In terms of exposure, I was attempting to balance the exposure provided by an off-camera flash with the spotlight directed at the creche visible near the right edge.  I also needed to get the flash (a Godox AD200) high off the ground to show the folds of the gown, while far enough away to minimize the relative distance between the foreground dancers and the heavenly host in the background. This resulted in my using a 8' light stand to support the flash and placing it about 20' away from my main subject.

While it would have been possible to use an optical TTL mode (Nikon's TLS system, for example), I chose to use a radio transmitter mode. Doing so freed me from having to worry about aiming a shoe-mounted flash directly at the remote unit, a task made difficult by my low shooting angle and constant re-positioning.

Channels And Groups: Let's get two definitions out of the way.

Wireless (Mode) Selection Button: The flash has fire connectivity options which you can select by pressing the Wireless Selection Button and moving through the options. If you check the red arrow, you can locate it on the back of your flash.

In this flow chart, you can see the selection sequence, starting from the On-Camera iTTL Flash screen. This the basic on-camera flash mode, the one you'll be using when using the flash for bounce flash situations indoors, or for shadow fill outdoors. Notice too that the backgrounds change from green (commander mode) to orange (remote mode) as you make your selection. 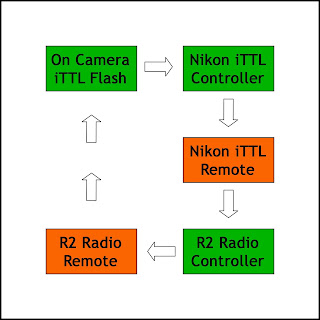 Some Reminders:
When you have two Adorama/Godox flashes, one can serve as your commander and the other as your remote, depending on which option you choose.

When using the Nikon's pop-up flash as a commander, you would go straight to "Nikon iTTL Remote" and set the group and channel to match your existing pre-sets.

The only time you would choose the Nikon iTTL Controller mode is when you are including some Nikon compatible speedlights in the mix. The advantages of radio control make this mode a poor second unless you have a good reason to do so.


Phil Steele has a wonderful explanation on how to configure a R2 transmitter. Even though he uses a Canon camera, the setting of channels and groups applies. Click here to view his instructional video.

Posted by Tom Jung Photography at 9:32 AM No comments: Links to this post