I was assigned to a press preview of the opening of "Hamilton" in San Francisco. I have never been to a press event scheduled at the SHN Orpheum Theater. I expected to see a mini-presentation of the play, or at least a song or two, but alas it was not to be. Perhaps the publicist felt that impressions of the show presented in words were more important than those done with images. As my editor (the wordsmith) was out of town, I was left with trying to capture some images to accompany her review (the photosmith). Or more likely, there could be some issues associated with recordings made during this briefing.

Luckily for me, the Orpheum is located at one of the the public transit exit points, so getting there was a six-minute metro ride to the theater's front door. Once inside and checked in, we were escorted to a single row of chairs facing the grand stairway that leads to the balcony. When I saw this, my heart fell. The existing light was limited to a few wall sconces and a chandelier that hung from the ceiling, so the stairway was essentially a dark cave that resisted all attempts at lighting. Of course, if I had free rein to light the venue, I'd have had speedlights everywhere, but that wasn't to be the case. 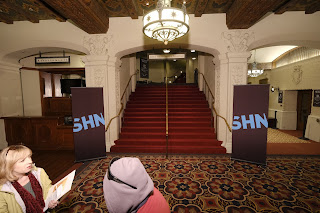 This photo was taken from a position just behind the row of chairs, and you can see a reviewer and a photographer chatting it up in the foreground. The shot was made with a flash and a Fong Light Sphere with the dome facing outward, as is recommended by the manufacturer. This wouldn't do much to improve the quality of light, but would spread the light more evenly. It was mounted on a short monopod which gave my light a slightly better, high overhead position. This was needed, as I was holding the camera at arms length above my head, assuming I'd need the height to eliminate photographers in the foreground. 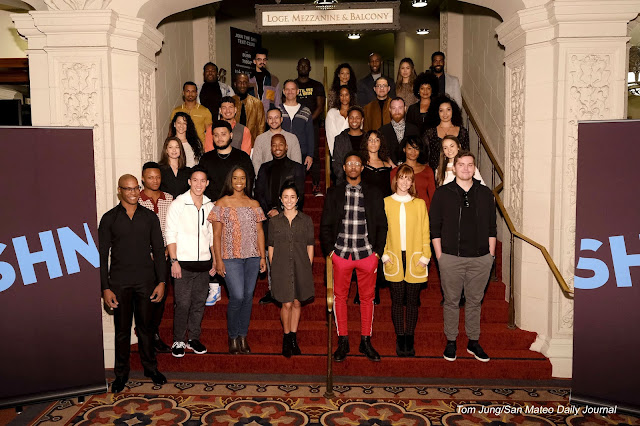 Alphabetical Order By Height*:  As is the custom, actors in minor roles are introduced first, just as the runner-up is introduced before First Place. As they were coming down from the balcony, the minor players were in front, and the principles far in the back. Ironically, the actors of the greatest interest were positioned farthest from the camera. Still, I was confident that no other photographers would be making a better photo, since one other photographer and I were the only ones using flash, an absolute necessity under these conditions. I made the shot standing behind the line of chairs with my back to a post. As I mentioned, the camera was in the high overhead "Hail Mary" position , with the flash on a monopod held higher still for an improved light placement.

After a few minutes, the minor actors were dismissed and the principles moved to designated press stations where they could be interviewed. I found a group of journalists interviewing one of the actors. In this case, the tool of choice was the smart phone, and the two media outlets, V-Media and Joint Forces Journal, were busy asking questions and making video clips. It is apparent from my earlier efforts that conventional flash wasn't going to work, so I decided to concentrate on headshots and find an bounced alternative to direct lighting. I switched to a short telephoto lens, mounted the flash in the hotshoe, and started looking for actors in better shooting environments. 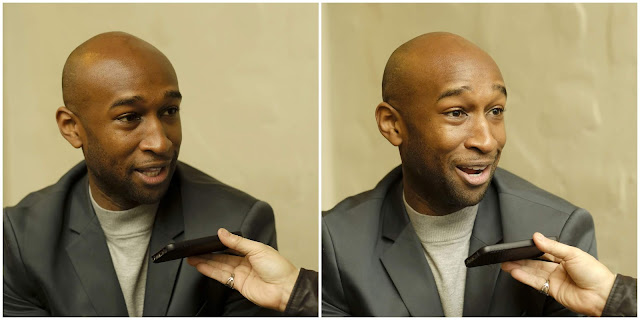 A Twist Of The Wrist: I found this discussion in the hallway just outside the mezzanine entrance. My first shot, left, was made with the flash pointed to my left, giving me a broad-lit shot and no details in the eyes. But when I rotated the head to my right and slightly behind me, I achieved a lovely butterfly lighting on a three-quarter portrait, giving me all the detail I could possibly want.

Bingo! I managed to find a "sweet spot" for my flash, and could now concentrate on expression. This young actor was especially animated, so I backed off to include some expressive hand gestures that might add to the photo. After I saw the results, I decided to re-shoot some of the earlier subjects, now confident that I could produce some images worthy of submission.

Reshoot: I went ahead and re-shot any actor whose images could be improved with this revised bounce light technique. I was careful to position my subjects in front of manageable backgrounds while positioning myself to maximize the effectiveness of the bounced flash. In this shot, I purposely included more background than necessary, should a rectangular photo be required.
Before And After: When I caught up with this actor, I positioned him in front of a suitable bounce surface and asked him to give me his best "big guy" look. For the second shot, I asked him to convince me that my kids would like to schedule a play date with him. I must have found his soft spot, because this is a million dollar smile, adjusted for inflation.


Emotional Focus Again: At the very last moment, my subject leaned into the camera, effectively moving out of the plane of focus. Just check the buttons on the far lapel. But it's a wonderful photo of this Hamilton actor, and while I love the shot, I could never submit it for publication. It's probably the best image in my reject bucket.

*This is a non-sequitur teachers sometimes used on students when  they were being told to queue up.


Postscript June 7, 2019. One of the photos ran in the Journal. Other photos appeared online in the SHNSF Newsletter.