In my opinion, digital photography's greatest advantage is the ability to view the image immediately after the exposure is made. With a quick glance you can verify the accuracy of your exposure, and you can insure that everybody is in focus and you don't have any "blinkers". With film, you had to wait until after the film was developed and the proofs delivered. Waiting those few days was total agony, especially when you thought you managed to grab a really nice photo. 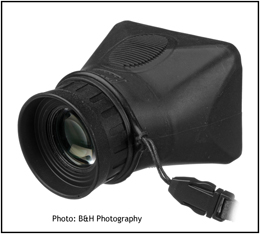 I've started making a habit of carrying, and using, a Hoodman Hoodloupe when photographing people. It is important to examine the images, especially when you've just rounded up your subjects for a group shot and know it would be nearly impossible to get them back together for an emergency re-shoot. Take the time to check your shots and dismiss the principles only after you're satisfied that everything is as good as you can make it. Also, the Hoodloupe allows you to examine the entire image under magnification rather than viewing just one small portion at a time.
If you purchase the Hoodman unit, you will find that the soft storage case will accommodate the Hoodloupe only when the eyepiece is fully retracted. But when properly focused, you'll find that it's now too long for the case. So to speed things up, I adjusted the eyepiece to properly view the LCD panel, and painted two index marks so I could quickly return the loupe to proper focus without actually looking through it.

In The Field
I was photographing a special "Car Care For Women" presentation for the Journal. I had envisioned a shot where the participants were circled around the open hood of a car while the instructor gave his presentation. I initially thought that if I was close enough to the fender, I could get some engine details in the foreground. It didn't turn out as I had planned, and the best shot, taken from that position, is shown here. 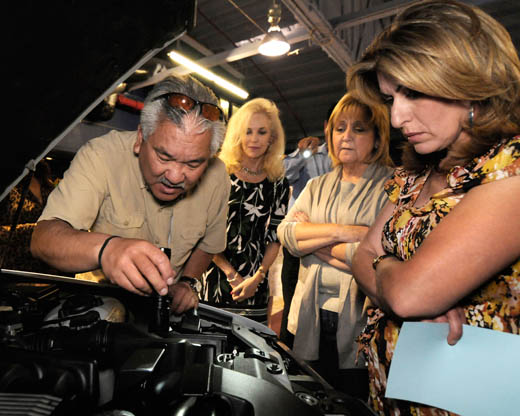 I would have been perfectly happy with this shot, but upon closer examination, I found two shortcomings. First, there's the disembodied hand holding the flashlight in the background. And second, there isn't enough "engine" to help the story line along. I might have been content with the shot, but after close examination with the Loupe, I decided to keep shooting.
As luck would have it, the next demonstration car was already up on a lift. As the women gathered around, I positioned myself across from them and from a very low angle, and took my first shot. I immediately checked the exposure, and since I was satisfied, continued to shoot, looking for that moment when everybody looked engaged, properly exposed, and reasonably well distributed within the photo. The photo that I finally submitted is shown below. 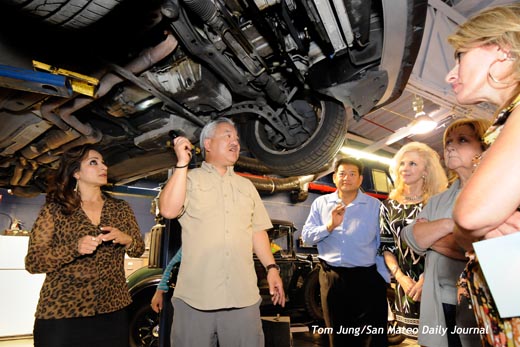 This shot was chosen because the sponsor of the event is clearly visible in the back, and except for the floating arm behind the instructor, relatively free from distracting clutter.
While getting names for the caption and showing the final photo, the subject on the left remarked that the photo was not particularly flattering. But when I showed her the entire image, magnified with the Loupe, she agreed that it was a good photo of their host and the teacher, the two real stars of the image. The Loupe allowed her to critically view the entire image in sharp focus, something that can be difficult if she was forced to squint while trying to view the image on the LCD.
It was a fun assignment, and while there are things I wish I could have changed, my Editor was pleased with the effort. Incidentally, I cannot/do not alter the content of my images, meaning that cloning, the process where unwanted details are "painted" out, is strictly forbidden. And since this was a class in progress, I could only adjust my vantage point when attempting to conceal any distractions in the background.
Having and using the Loupe allowed me to make critical judgements before I leave the venue. This raises the bar when it comes to what I submit and what I will eventually delete.

Exposure Details: Nikon D300, Tokina 11-17mm 2.8 lens, 1/20 @ 3.5,  ISO 1600, Cloudy WB setting. An SB-800 with a Gary Fong Cloud Dome was used to light the foreground.
Specular Highlights: When these images were selected for the post, I noticed how much "nicer" the first sample was. The difference is due to two factors: the distance from the camera to the subjects and the height of the flash above the lens axis. In the first sample, the on-camera Gary Fong Cloud Dome was about 10" above the lens axis, and the taking distance was about 3 feet. There is good modeling on the instructor's face and a relatively small specular highlight (shiny spot) on his forehead. In the second shot, the distance was more than doubled, but the height of the shoe-mounted flash above the lens axis remained constant. This brought the light source closer (relatively) to the lens axis which resulted in a highlight more centered on the subject's faces. This resulted in an image that appeared washed out and more two dimensional. When working distances are this short, a SC-28 Remote TTL Cord can be effective in getting the flash further away from the axis.
Posted by Tom Jung Photography at 9:33 PM No comments: Links to this post