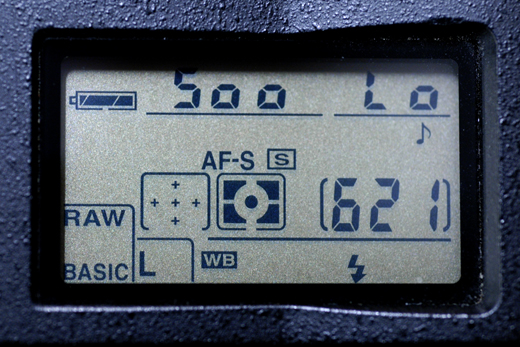 The Lo error message shows up occasionally. It isn’t an error message, so much as a warning, of an exposure anomaly. It never occurs in the manual mode, since the camera assumes that you know what you’re doing. You’ll see it occasionally in Aperture Priority, but mostly in Shutter Priority. Let’s explore this.

Let’s determine the proper exposure using the Sunny Sixteen Rule. Let’s start with an ISO setting of 125, just to make things simple. Under the requisite sunny conditions, the rule dictates the base exposure, shaded in yellow. I’ve added 8 additional shutter/aperture combinations that will provide an identical exposure.

But what if the lens doesn’t have an aperture of F 4? This would be a common occurrence if you’re using a variable aperture kit lens at the longer settings where the widest aperture is 5.6 or slower. In this case, the camera would give you the “Lo” error message, indicating that the combination is beyond the lenses ability to compensate. In fact, you’d get the warning with any shutter speed for which there was not appropriate aperture. You can see the possible shutter settings that would give you the message.

The Lo message will appear from time to time. It's just a reminder that sometimes the camera DOES know best!


By the way, you'll also get it if you leave the lens cap on.
Posted by Tom Jung Photography at 12:10 PM No comments: